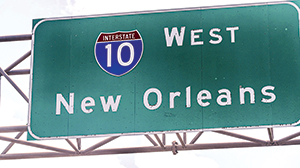 A participant in a ring that staged two accidents the same day with two tractor-trailers in New Orleans has pleaded guilty to conspiracy to commit mail fraud.

Marvel Francois, 51, of Houma, La., entered a guilty plea in federal court Oct. 27, admitting that she, along with Damian Labeaud, Bernell Gale, Troy Smith and another passenger participated in two staged accidents with trucks on May 17, 2017, in New Orleans.

In return for her plea, the charges against Francois were reduced from three federal counts to a single conspiracy count. She faces up to five years in prison and a $250,000 fine. Labeaud, Gale and Smith also were charged and already have pleaded guilty, according to a statement by Peter Strasser, U.S. Attorney for the Eastern District of Louisiana.

In one of the crashes, a federal indictment said that Francois watched from another vehicle as Labeaud crashed a pickup truck into a 2006 Freightliner tractor-trailer that was merging onto the Pontchartrain Expressway from Calliope Street in New Orleans.

In a second staged accident about an hour later, Francois was a passenger in a 2007 Dodge Durango owned by her son that slammed into a 2017 Peterbilt tractor-trailer turning from Chickasaw Street onto Louisa Street in New Orleans, according to the indictment.

In the second crash, Labeaud again fled the scene and then Francois, a passenger in the crash vehicle, falsely reported to the New Orleans Police Department that she had been driving, and that the tractor-trailer had struck her vehicle.

In some cases, the attorneys are alleged to have paid Labeaud to stage the accidents, according to court documents. The attorneys knew that the participants were uninjured but referred them to medical providers for treatment to increase the value of subsequent lawsuits, according to documents filed in federal court. Francois, however, declined to be treated for the accident to increase the potential size of a lawsuit.

Prior indictments have referred to at least three unnamed attorneys, plus doctors “known to the grand jury.” However, none of the attorneys or doctors accused of participating in the scams has yet been charged.

The FBI, Louisiana State Police and the Metropolitan Crime Commission have been participating in the ongoing investigation.

In late September, only four days after he was indicted, alleged ringleader Cornelius Garrison was murdered amid reports that he had been cooperating with federal investigators.