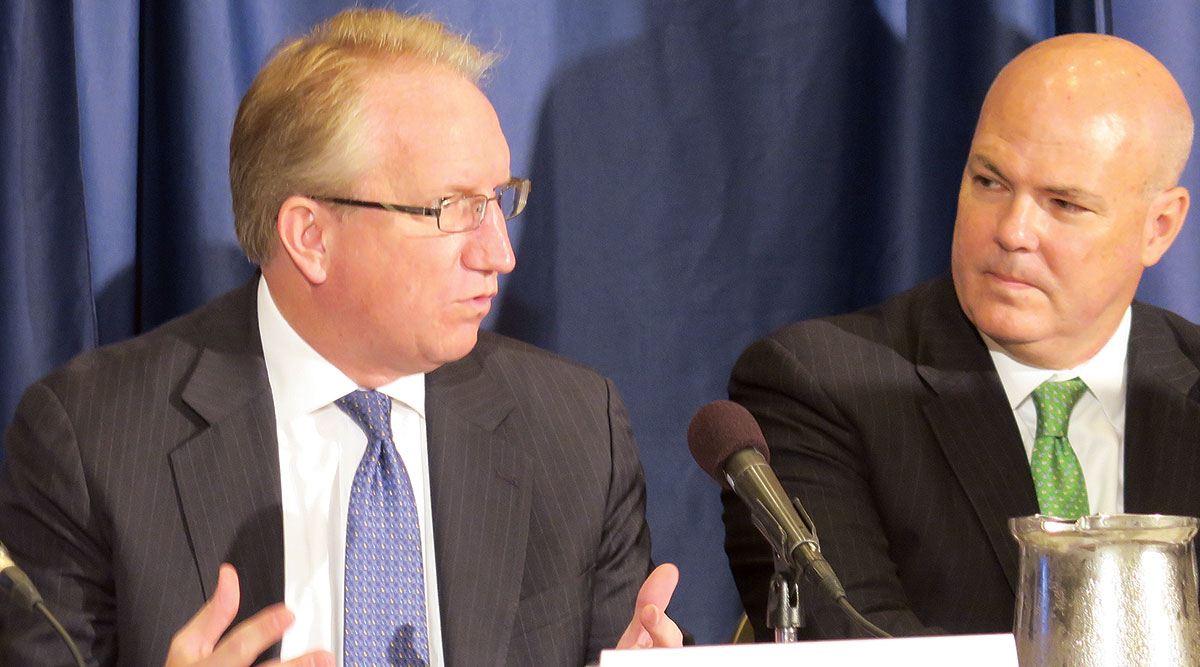 WASHINGTON — Anemic shipping volumes and weak pricing for transportation carriers in 2016 combined to push down total U.S. business spending on logistics, both in dollars and as a percentage of gross domestic product.

Spending on transportation, carrying inventory and other logistics areas was $1.39 trillion in 2016, down 1.5% from $1.41 trillion the previous year, said the Council of Supply Chain Management Professionals here on June 20 at the group’s annual State of Logistics event.

The exception was parcel shipping, where annual revenue surged 10% to $86.3 billion, based on booming demand for e-commerce shipments. “The big star for the year was parcel,” said Sean Monahan, a partner with A.T. Kearney Inc., the consulting firm that prepared the logistics report for CSCMP.

Overall rail shipping dropped 11% last year, with carload revenue falling 13.8%, mainly on the collapse of coal. Intermodal’s decline was much more modest, with a 2.5% revenue dip for the year.

Trucking had a mixed record, according to the Kearney report.

Less-than-truckload carriers had a 0.5% revenue gain last year to $58 billion. While not a large percentage, the 2016 improvement was better than the industry’s five-year average figure of 1.2% annual contraction. Parcel and LTL were the only two modes to do better in 2016 than their five-year averages.

Among all transportation modes — including air, water and pipeline — transportation spending dipped by 0.7% in 2016, A.T. Kearney said, but on average for the past five years, it has grown by 3.6% a year.

Monahan’s presentation of his firm’s report was the foundation of the State of Logistics event, but CSCMP also brought in several members who shared their experiences.

Eugene Seroka, executive director of the Port of Los Angeles, North America’s busiest container port, spoke about some of the competing political pressures he faces. As a public official in Southern California, he must help promote efforts to clean the region’s perpetually troubled air quality, yet he is also in a dogfight to maintain market share, now that the expanded Panama Canal is helping to move bigger containerships to East Coast ports.

“Emissions are the hottest discussion point in California today, but there’s not a lot out there in trucking equipment that’s pure, zero emissions,” Seroka said. He wants his port and the one in neighboring Long Beach to create a marketplace for such innovations, especially yard tractors for moving containers at the two ports, by 2030 and on-road drayage tractors by 2035.

As for port competition, Seroka said he doesn’t expect the Port of Los Angeles to be displaced as No. 1, but he worries about losing containerships to a combination of ports on the East Coast. “One port won’t overtake us, but we’ve got Nos. 4, 5 and 6 nipping at our heels, and that’s serious competition,” he said.

Seroka said market share “is of great importance,” because one in nine jobs in metropolitan Los Angeles is related to activity at his port and neighboring Long Beach.

“Our freight touches all 435 congressional districts at some point,” he said.

Seroka also said he is very concerned with infrastructure, but that should be understood as including more than concrete and steel. To complement traditional facilities, Seroka said, Los Angeles is also improving information technology capabilities, so shippers, carriers, terminal operators and public authorities can communicate more quickly.

Marc Althen, president of Penske Logistics, a division of Penske Truck Leasing, offered a caution on e-commerce. While shipping is sometimes marketed to customers as free, he made clear that, in fact, it is not.

Penske ranks No. 12 on the Transport Topics Top 50 list of the largest logistics companies in North America. The company also sponsored the Kearney report for CSCMP.

Penske does some e-commerce work, but Althen said there currently “is not a lot of margin” in it and that the service is not currently priced for long-term sustainability. He said Penske was asked by a shipper to make home deliveries, but the fees offered were “unworkable.”

If e-commerce retailers will not plan on realistic shipping costs, then Penske will not be a carrier for them. “We will play in a different field.” he said.

While Penske Logistics’ 3,000 trucks, mainly for dedicated contract carriage, make for a large fleet, it pales in comparison to the 200,000 trucks owned and leased by the parent company. Althen said he buys new, well-appointed tractors to keep his dedicated drivers happy and that the company invests heavily in safety and fuel economy options.