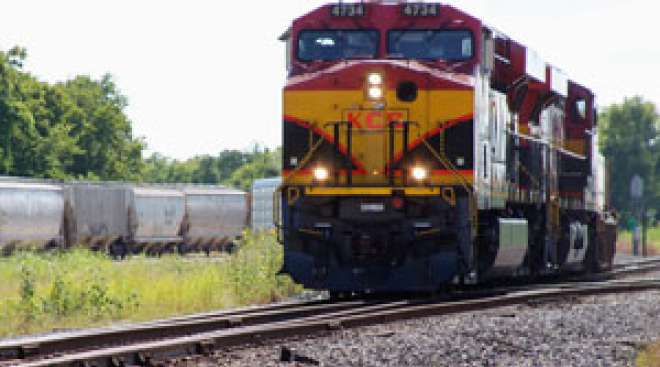 Kansas City Southern reported lower profits in the fourth quarter and full calendar year 2016 compared with the same period of 2015, although the freight railroad was most hurt due to foreign exchange rate losses from its international business.

Kansas City Southern was hurt by a $72 million foreign exchange loss during the full year and $24.7 million in the fourth quarter, due in part, to the Mexican peso plummeting in value in 2016, particularly after American voters elected Donald Trump to the White House. The railroad has a significant cross-border network between the countries.

Operating profits, or the income left over after expenses were deducted from revenues, was $818.5 million for the full year, up 1.8%, although it fell 3.7% to $210.9 million in the fourth quarter.

On a call with investors, Kansas City Southern executives talked about the unanswered questions around Nafta under the new U.S. president.

"Obviously, the political and economic uncertainty is probably first and foremost on most of our minds, and the irony of us reporting earnings on the inauguration day of the 45th president is not entirely lost on us," CEO Patrick Ottensmeyer said. "While we've gotten some indication of the direction of the new administration through the nomination of most of the key trade policymakers, we still don't have definitive answers to several of those questions."

Intermodal business was slightly lower in the fourth quarter and full year versus 2015 but didn't struggle as much as the transportation of petroleum, crude oil, frac sand, minerals, ores and coal.

The operating ratio for the full calendar year was 64.9%, a 190 basis-point improvement from 2015. However, the ratio deteriorated 140 basis points in the fourth quarter to 64.8%.