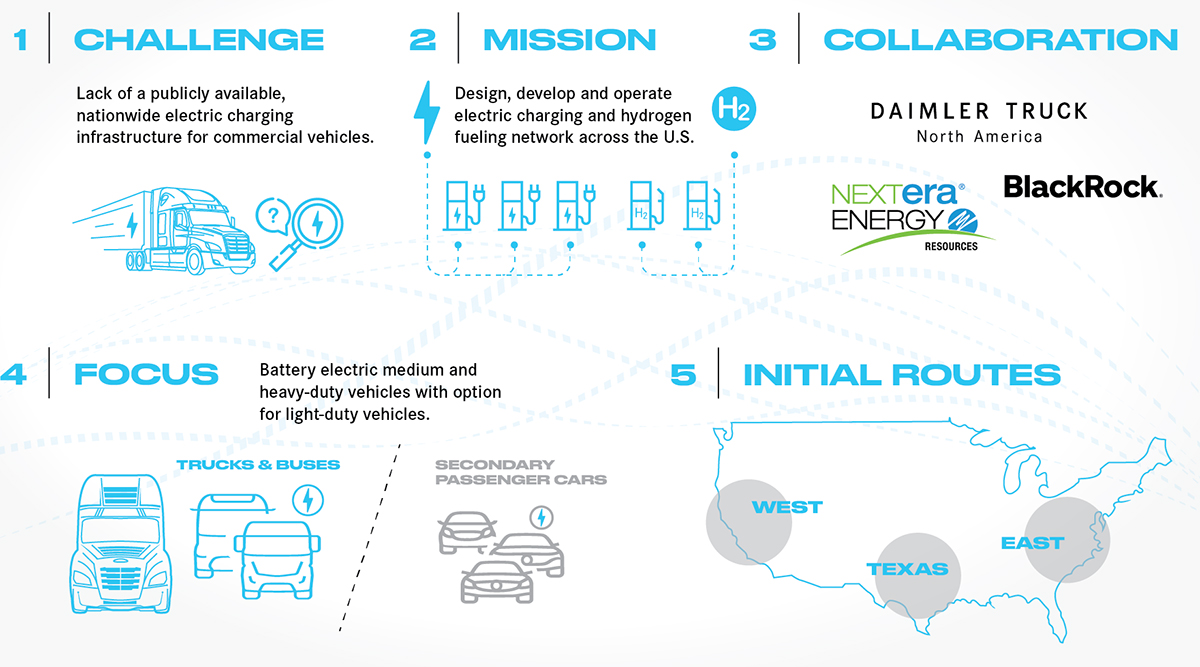 Once the joint venture is in place, initial funding is expected to be $650 million divided equally among the three parties, according to a statement released Jan. 31.

“This project is a critical step toward developing a sustainable ZEV [zero-emissions vehicle] ecosystem across North America, and we look forward to including additional partners as it progresses,” DTNA CEO John O’Leary said in a release. “We are committed to providing access to this network not only for the DTNA vehicle brands, but also for any manufacturers using predominant industry charging standards and communication protocols.”

The effort would leverage existing infrastructure and amenities while adding complementary greenfield sites to fulfill anticipated customer demand, according to the companies.

The first phase is set to begin construction in 2023.

This project is a critical step toward developing a sustainable ZEV [zero-emissions vehicle] ecosystem across North America.

The initial focus will be on battery electric medium- and heavy-duty vehicles, followed by hydrogen fueling stations for fuel cell trucks; the sites will also be available for light-duty vehicles to serve the greater goal of electrifying mobility, the companies noted.

NextEra Energy Resources, a leading generator of renewable energy from the wind and sun, is also a significant investor in electric and charging infrastructure; it noted it’s one of the largest wholesale generators of electric power in the United States, with 23,900 megawatts of total net generating capacity, primarily in 38 states and Canada as of year-end 2020.

Investment manager BlackRock’s Renewable Power group has more than $9.5 billion in total commitments and investments in more than 350 wind and solar projects, in addition to electric vehicle charging infrastructure and battery energy storage systems, across 15 countries and five continents.

“Engineers and scientists are working around the clock on how to decarbonize cement, steel and plastics; shipping, trucking and aviation; agriculture, energy and construction,” BlackRock CEO Larry Fink wrote in his 2022 annual letter to CEOs on behalf of its clients who are shareholders in those companies.

“I believe the decarbonizing of the global economy is going to create the greatest investment opportunity of our lifetime,” Fink said. “It will also leave behind the companies that don’t adapt, regardless of what industry they are in. And just as some companies risk being left behind, so do cities and countries that don’t plan for the future. They risk losing jobs, even as other places gain them. The decarbonization of the economy will be accompanied by enormous job creation for those that engage in the necessary long-term planning.”

The Biden administration has a strategy to build 500,000 electric vehicle charging stations across the country in the next eight years. The recently enacted bipartisan infrastructure law is providing funding for that infrastructure.

“As more heavy-duty vehicle models become market-ready and sold over the next several years and as EV range improves, the most logical siting for charging locations for longer-haul freight trucks should be at existing truck fueling locations,” American Trucking Associations wrote in its comments on the plan.

Meanwhile, for fleets considering electrified trucks and the path forward, the North America Council for Freight Efficiency concluded in a recent report there are two main business models for procuring charging stations and associated infrastructure:

“Other innovative business arrangements may be possible. For example, third parties could step in with capital to create turnkey systems with various usage rates, which could remove the site owner from the complexity of managing part or all of the charging system,” NACFE wrote.