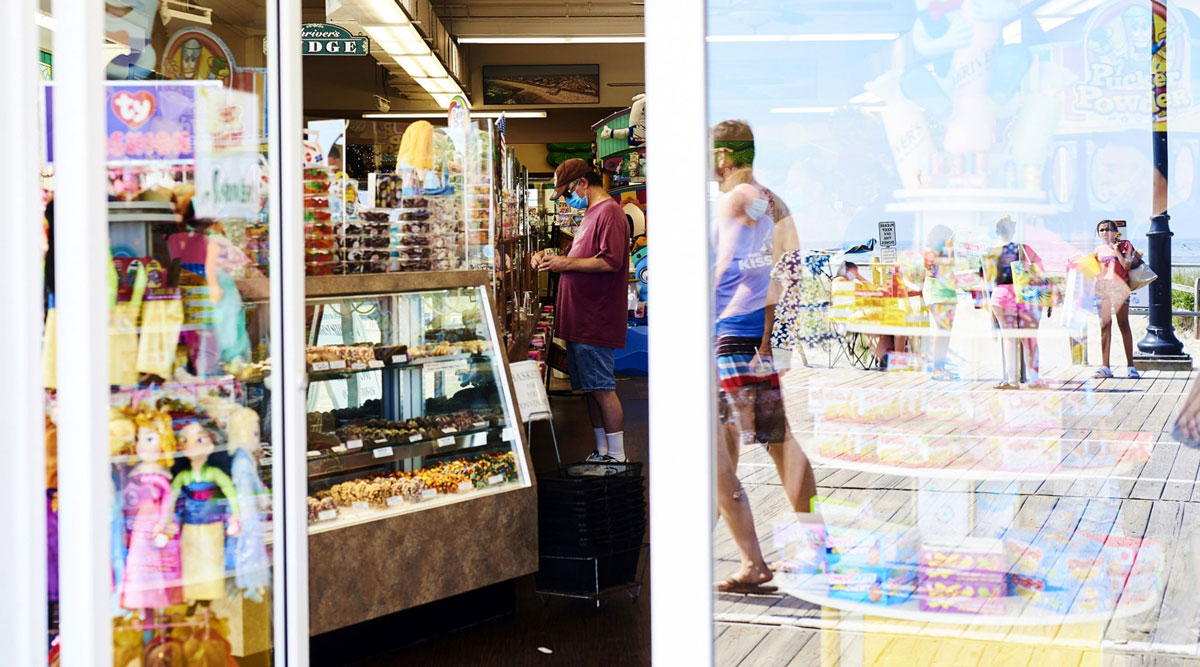 A customer wears a mask inside a boardwalk shop in Ocean City, N.J. on Aug. 1. (Gabby Jones/Bloomberg News)

Applications for U.S. unemployment benefits unexpectedly increased last week, a stumble for the labor market in its long road to recovery.

The pickup in initial jobless claims in regular state programs reinforces forecasts that improvement in the labor market will occur in fits and starts, with the latest uptick likely representing a pause in that recovery — rather than a substantial change in direction. It would take sustained weekly increases in claims to raise concern that the job market is in danger of unraveling after recent progress. 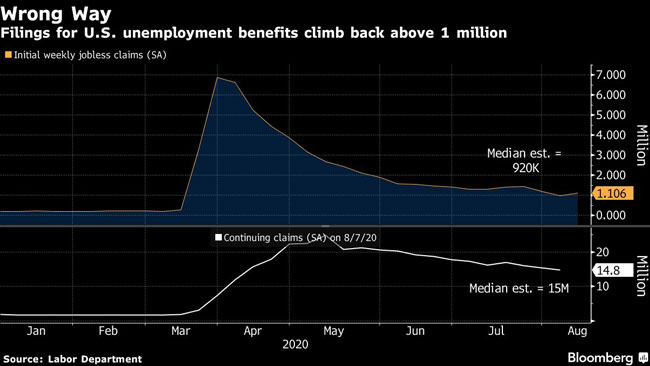 The labor market is bouncing around from week to week, but the trend remains intact, said Brett Ryan, senior U.S. economist at Deutsche Bank AG. “It’s not going to be simply a straight-line recovery.”

Even so, initial claims well exceed the worst week in the 2007-09 recession, and while new COVID-19 cases have been slowing, thousands are still reported daily. The impact is particularly prominent in the consumer-facing industries such as restaurants, travel and leisure.

The median estimate in a Bloomberg survey of economists called for 920,000 initial claims in the latest week, which coincides with the survey period for the government’s monthly employment report. Stocks fell and Treasuries climbed after the figures.

The downward trend in continuing claims is favorable news for the recovery, though headwinds persist. Companies are going bankrupt and small businesses are disappearing at a time when the economy has only recovered about half of the jobs it lost in March and April. The unemployment rate is still nearly three times its February level.

“While there has been a steep decline from crisis peaks, the fact that five months into the crisis initial claims are running at 1.1 million per week is, in absolute terms, very bad news,” Joshua Shapiro, chief U.S. economist at Maria Fiorini Ramirez, Inc. wrote in a note.

On an unadjusted basis, initial claims rose to 891,510 from 838,734 as New Jersey, New York and Texas reported sizable increases from the previous week.

With the expiration of the extra $600 in weekly jobless benefits at the end of last month and the inability of Republican and Democratic lawmakers to come to an agreement on how to extend them, President Donald Trump signed an executive action to provide $300 a week in federal support to most unemployment benefit recipients.

A handful of states have been issued the first round of funding for the Lost Wages Assistance program, including Iowa, Arizona, New Mexico, Louisiana, Utah, Colorado and Missouri, though the majority have yet to distribute the funds. Arizona began issuing funds to claimants earlier this week, but it’s unclear when most Americans will begin to see the supplemental aid.

RELATED: US Jobless Claims Below 1 Million for First Time in Pandemic

As the pandemic drags on, more and more people are beginning to claim Pandemic Emergency Unemployment Compensation, the federal program that provides up to 13 additional weeks of jobless benefits to those who have exhausted their regular benefits. While most states offer 26 weeks of benefits, others, such as Florida and North Carolina, offer about half of that. Almost 1.3 million people were claiming the aid in the week ended Aug. 1.

Jobless Claims Fall to 712,000 as Pace of Layoffs Eases