US Jobless Claims Below 1 Million for First Time in Pandemic 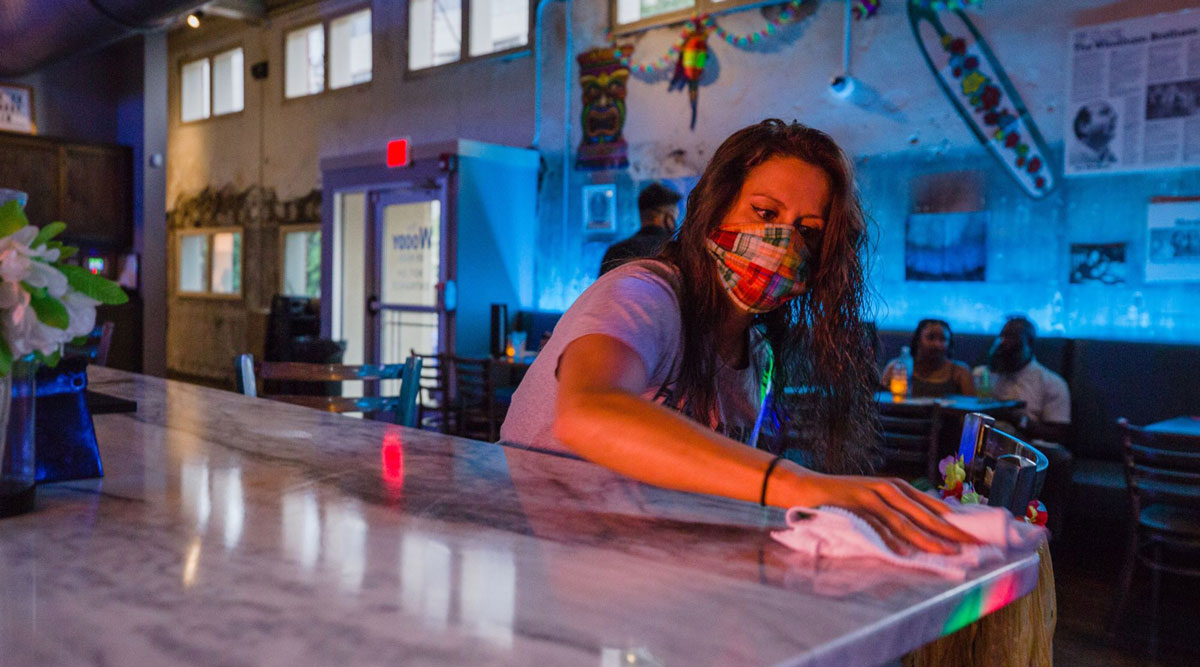 A worker disinfects a bar at a nightclub in Columbia, S.C. (Micah Green/Bloomberg News)

The number of Americans applying for unemployment benefits fell below 1 million for the first time since the pandemic began in March, suggesting the economic recovery is gaining some traction amid a deceleration in coronavirus infections.

U.S. stock futures reversed their earlier decline following the jobless claims, a day after the benchmark closed within 0.2% of its all-time high. Economists were expecting initial claims of 1.1 million and continuing claims of 15.8 million, based on median estimates. Both figures remain well above the highs reached during the last economic downturn.

The bigger-than-expected drops in claims follow an ebbing in new coronavirus cases, underlining how important controlling the virus is to an economy that remains well below pre-crisis measures in most respects. The decline also could reduce the pressure on the White House and lawmakers to agree on a new stimulus package following the expiration of aid in recent weeks. 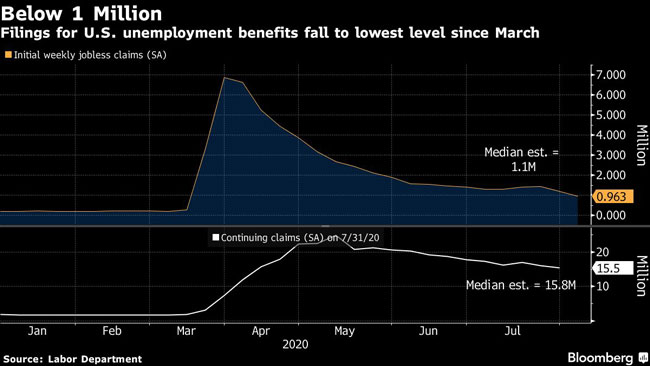 At the same time, the recent declines in claims could potentially reflect less incentive to file after the extra $600-a-week in supplemental federal benefits expired. With unemployment above 10% in July, the labor market still faces challenges including widespread business closures and bankruptcies, as well as online learning that’s forcing Americans to take care of their children at home.

“It’s clear that the pace of layoffs is beginning to moderate, but it’s still an enormous number of people filing for unemployment insurance benefits,” said Ryan Sweet, head of monetary policy research at Moody’s Analytics. “One concern for both the job market and the broader economy is the lack of urgency in passing another round of fiscal stimulus. The economy needs more fiscal stimulus.”

The latest declines in initial claims spanned states where coronavirus cases had bloomed in prior weeks, such as California and Florida, as well as New York, where counts have remained low. On an unadjusted basis, initial claims had already dropped below 1 million the prior week, and last week fell about 156,000 to 832,000.

RELATED: US Adds 1.8 Million Jobs in Sign That Hiring Has Weakened

President Donald Trump last weekend authorized the payment of $300 a week in federal aid to unemployed Americans, smaller than the $600 benefit that expired in July — and limited by funds that could run out within two months.

States can choose to bolster that $300 with an additional $100, but the Labor Department clarified on Aug. 12 that the $100 can consist of regular benefits already paid by states. The legality and effectiveness of the move, along with a four-month deferral of payroll taxes, remains unclear.

In addition to applications for benefits in regular state programs, states reported 488,622 initial claims for Pandemic Unemployment Assistance, or PUA, in the week ended Aug. 8. That’s the federal program offering jobless benefits to those who don’t qualify for the state program, such as the self-employed and gig workers.

The total number of people claiming benefits in all programs decreased to 28.3 million in the week ended July 25, though this figure likely still reflects states’ overcounts of reported PUA continued claims. Still, it’s the lowest in almost three months.

US Jobless Claims Tick Up to 745,000 as Layoffs Remain High