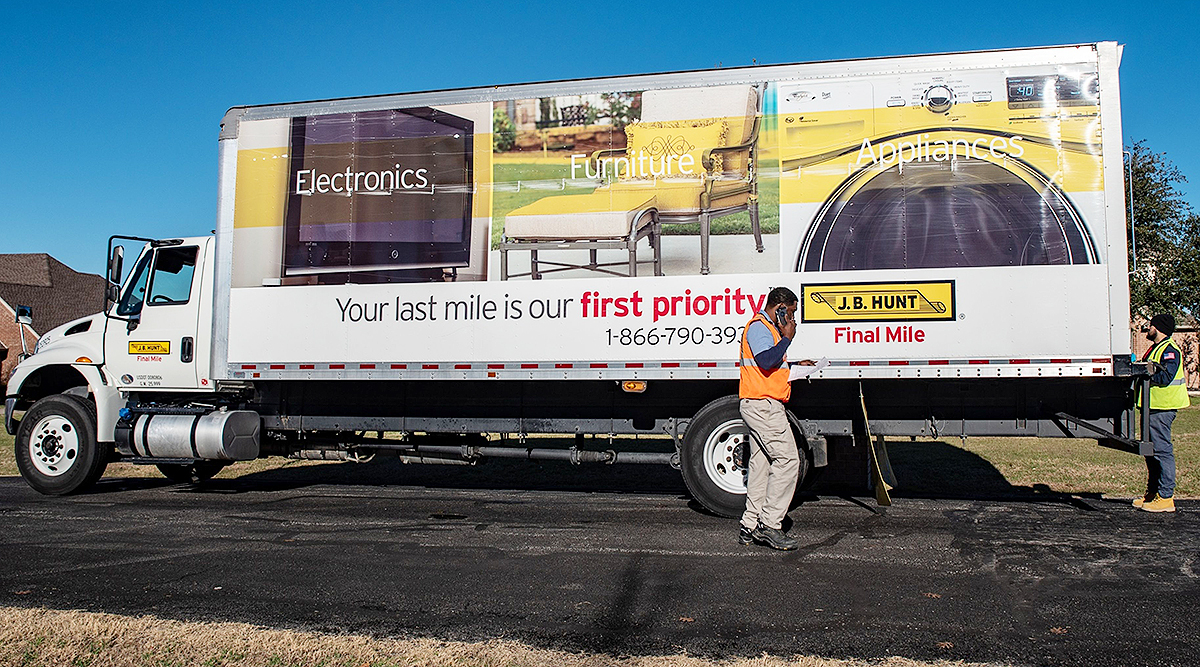 The Lowell, Ark.-based transportation and logistics company posted net earnings of $199.8 million, or diluted earnings per share of $1.88, for the three months ending Sept. 30. That compared with net earnings of $125.5 million, $1.18, during the same time the previous year.

The results surpassed expectations by investment analysts on Wall Street, who had been looking for $1.77 per share and quarterly revenue of $3 billion, according to Zacks Consensus Estimate.

“The third quarter continued to present the momentum we spoke of during our last earnings call,” J.B. Hunt CEO John Roberts said during a conference call with investors Oct. 15.

But he also said the company anticipates “persistent irregularities in demand patterns substantially resulting from port, labor and inventory challenges with our customers.”

He added the port congestion has hindered supply chain improvements ahead of the holiday season while the labor challenges have led to a record need for drivers.

“We’re generally pleased with the performance of all segments,” Roberts said. “However, we do have ample room for improvement with the inventory flows and contractor model in our final mile business as well as in the utilization of equipment in intermodal.”

All segments contributed double-digit revenue growth versus the same period a year ago. The J.B. Hunt 360 marketplace helped contribute to that growth. Total freight transactions in the marketplace increased to $518 million from $358 million in the prior year’s quarter.

The truckload segment reported that its revenue for the quarter increased 87% to $204 million from $109 million during the same quarter last year. The increased revenue was driven by a 65% increase in revenue per load and a 12% increase in load count compared with a year ago.

Operating income for the truckload segment jumped by 397% to $14.7 million from $2.9 million last year. This was driven by increased load counts and revenue per load that were partially offset by increases in purchased transportation expense, higher driver wages, recruiting costs and higher non-driver personnel expenses.

The Final Mile Services (FMS) segment saw revenue increase 13% to $206 million from $182 million. Revenue per stop increased approximately 17% compared with the prior year period. The addition of multiple new customer contracts implemented over the last year was offset by a 3% reduction in stops related to labor and supply chain constraints.

The Dedicated Contract Services (DCS) segment reported revenue increased 20% to $665 million from $553 million. The report attributes the gains to revenue per truck per week being up 7% and the addition of 1,527 new trucks.

DCS operating income decreased 3% to $78.1 million from $80 million. An increase in revenue and productivity of assets was offset by increases in driver wage, recruiting costs, compensation and other costs related to the implementation of new, long-term contractual business.

The Integrated Capacity Solutions (ICS) segment saw revenue increase 55% to $666 million from $431 million. This was due to truckload volumes increasing 14% from the prior year period while revenue per load increased 48%. Revenue per load was favorably impacted by higher contractual and spot rates in the truckload business.

ICS operating income increased to $14.7 million from an operating loss of $18.3 million. This was due to gross profit margins increasing to 12% in the current period versus 7.6% in the prior period. The benefits from higher gross margin were partially offset by higher personnel and technology costs.

The intermodal segment reported that revenue increased 17% to $1.41 billion from $1.21 billion. Intermodal volumes overall decreased 6% from last year. Volumes in the quarter were negatively impacted by a continuation of rail restrictions across the network, elevated detention of trailing equipment and labor shortages. But demand for intermodal capacity and revenue per load remained strong.

“JBHT sent a strong tone to begin Q3 earnings, with a top and bottom line beat driven by strong pricing across all business segments,” Cowen analyst Jason Seidl wrote. “The intermodal network remains challenged with a 6% decline in volumes which we expect to continue given what we heard on our private trucking call, but strong pricing and surcharge revenue more than offset this.”