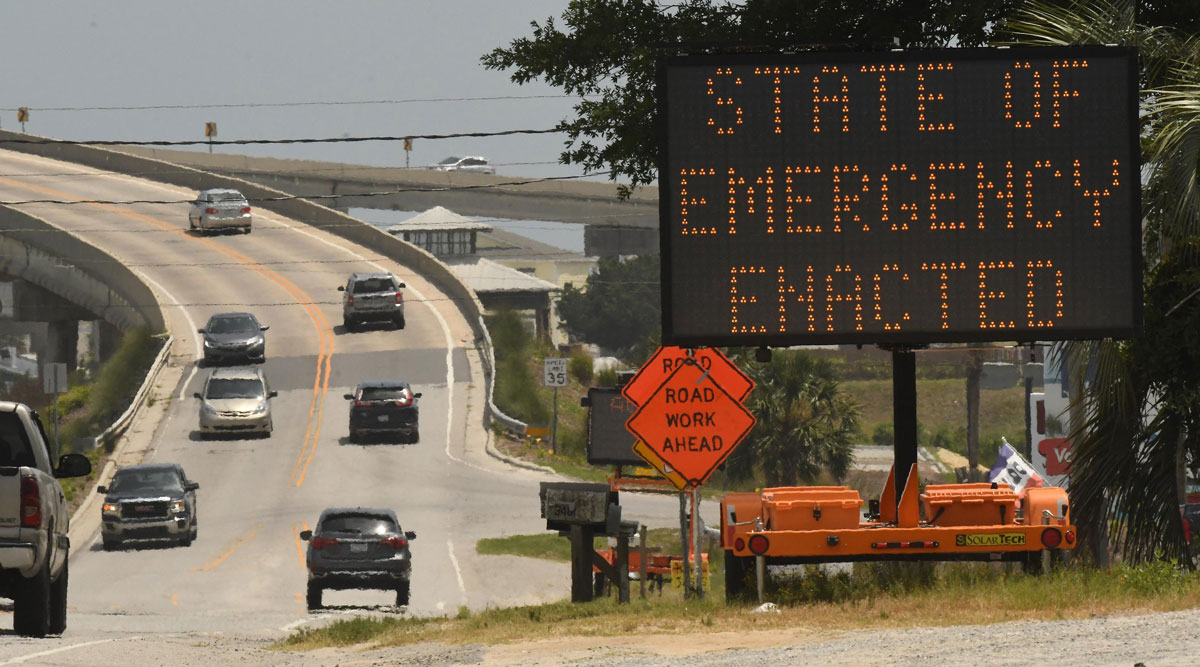 Isaias could cause $1.5 billion in losses as it picks up speed and strength, likely becoming a hurricane before hitting the Carolinas and posing the second tropical threat to New York in a month.

Tropical storm and hurricane warnings reach from South Carolina to Manhattan, with the flood threat reaching well inland and as far north as Vermont, according to the National Weather Service. Isaias likely will come ashore between Myrtle Beach, S.C., and Wilmington, N.C., late Aug. 3, and then race north overland to Canada. The storm doesn’t pose a threat to any major oil refineries or platforms.

“There is certainly going to be some flooding in the eastern U.S.,” said Don Keeney, a meteorologist with private forecaster Maxar.

Isaias will sweep through the Mid-Atlantic after striking the Carolinas, spinning over New York late Aug. 4 and then drifting off to northern New England and Quebec, where it almost certainly will fall apart by Aug. 6. A tropical storm warning has been issued for New York, the second this year. The city also was under threat from Tropical Storm Fay in early July.

Widespread 3-6 inches of rainfall from #Isaias will result in flash and urban flooding, some of which may be significant, from the eastern Carolinas and mid-Atlantic, continuing up the East Coast over the next 3 days. Roads will likely be flooded, don't drive through them! pic.twitter.com/gj9PFpp6gA — National Weather Service (@NWS) August 3, 2020

The storm’s top winds have reached 70 mph (113 kilometers), the National Hurricane Center said in an advisory at 11 a.m. New York time. Isaias is expected to strengthen later Aug. 3 and become a Category 1 hurricane on the Saffir-Simpson scale, with winds of at least 75 mph. It was about 220 miles south of Myrtle Beach.

North Carolina has opened shelters for people looking to flee the storm and will screen for COVID-19 symptoms, sending anyone who tests positive to another location where they can be isolated and receive medical attention, Gov. Roy Cooper said in a tweet. The state also has activated 150 National Guard troops to help prepare for flooding and damage.

Electric utilities have begun preparations for the impact of Hurricane Isaias on the grid by moving workers from other parts of the country and ensuring trucks and supplies are ready to go. Storms of this magnitude can sometimes dent natural gas demand by triggering power outages, and gasoline consumption also may drop as more people stay home.

“Isaias might trigger some localized power outages, but not widespread,” said Matt Rogers, president of Commodity Weather Group. “Mostly cooler high temperatures to give East Coast cities a break from the bigger heat of the last few weeks.”

Isaias’ jump in strength overnight isn’t as concerning as its more westerly track, which will throw more cities in its path, said Chuck Watson, a disaster modeler with Enki Research. Overall, the storm should inflict about $1.5 billion in damage and losses as it sweeps north.

The area of hurricane-strength winds is small and the storm’s structure is ragged, he said.

“If you’re in the wrong place at the wrong time on the immediate coast of North Carolina, you could experience hurricane-force winds,” Watson said. “But it’s not likely.”

Keeney said corn, bean, cotton and peanut crops in North Carolina will get the worst of Isaias, but the storm’s speed likely will limit widespread damage.

As much as 6 inches of rain could fall across the Mid-Atlantic, with New York and most of New England getting as much as 4 inches, the hurricane center said.

“Plan for power outages, street flooding, some scattered trees down, and have your radio on in case a random tornado forms,” Watson said.

President Donald Trump issued emergency declarations in Florida, where the storm nearly hit Aug. 2, and North Carolina. Isaias killed at least one woman in Puerto Rico and caused slight damage across the Bahamas. It’s the ninth Atlantic storm of 2020, the fastest such a tally has been reached in records dating to 1851.

While forecasters track Isaias, they also are watching another patch of thunderstorms near the Caribbean Leeward Islands that has a 60% chance of becoming the season’s next storm in five days, the center said.