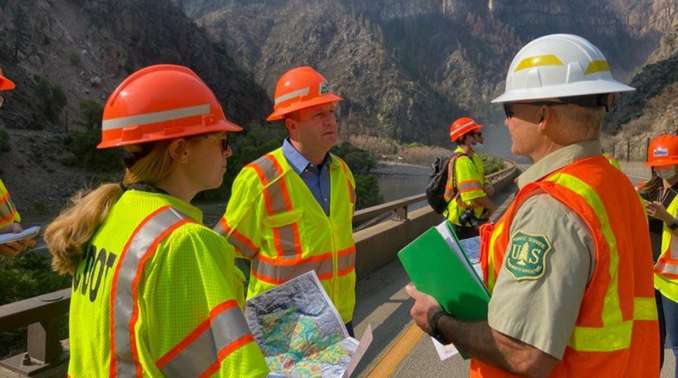 Colorado Gov. Jared Polis (center) and CDOT Director Shoshana Lew (left) speak with other officials and members of the media while observing the damage and repairs. (CDOT)

A portion of the heavily traveled Interstate 70 in Colorado that was damaged by mudslides is now open to traffic.

Running from Utah to Maryland, I-70 is the primary east-west route in Colorado and serves as a crucial freight corridor. Colorado Department of Transportation officials announced the reopening Aug. 14.

Heavy rainfall in late July resulted in an inundation of mud, causing CDOT to close the stretch of the route that passes through Glenwood Canyon, which is about 115 miles east of the Utah border. Damage was done to the interstate’s deck and superstructure, as well as the retaining walls.

The majority of I-70 traffic through the canyon is two lanes in each direction. However, a small section of route will be limited to one lane in each direction as maintenance crews continue cleanup operations.

“Please keep your eyes forward and make sure you don’t have any safety incidents with those backups,” said CDOT Deputy Chief Engineer Keith Stefanik in the reopening announcement. “We will experience backups during some of our peak travel times while we try to get this canyon open to two lanes in each direction.”

Stefanik said the goal is to have both lanes in each direction open by Thanksgiving.

The damage to I-70 prompted a quick response from state and federal officials. The Federal Highway Administration on Aug. 10 issued $11.6 million in emergency relief funding to CDOT to assist with repairs. The agency’s “quick release” emergency relief funds are meant to reimburse CDOT for work related to removing material from I-70, stabilizing slopes and conducting damage assessments. According to CDOT, crews hauled 440 loads of mud and other debris over two days the weekend of Aug. 7. Each truckload carried 13 tons of material.

I-70 is a key route for freight and passenger traffic. According to FHWA, an average of 17,000 vehicles traverse the corridor per day. Some 2,200 of these vehicles are trucks.

When I-70 was closed, Colorado Motor Carriers Association President Gregory Fulton said the traffic detour would take a trucker several extra hours, turning a one-day round trip into a longer dispatch. 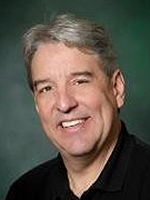 “The real impact that’s happened here is that we literally have to layover a driver,” Fulton told Transport Topics. “You’ve got the additional miles for the detour. You already have a driver shortage to begin with.”

Fulton explained the Glenwood Canyon area was previously affected by wildfires. The resulting “burn scar” means there is little vegetation to prevent dirt and mud from shifting. He noted the burned terrain adds a level of uncertainty, as rainfall could potentially lead to subsequent mudslides.

Recognizing these challenges, Fulton said he has encouraged transportation officials to consider a detour that could serve as an alternate route. He acknowledged detours can be challenging in Colorado, which contains mountains as well as federal- and state-owned land.

Fulton suggested Cottonwood Pass Road, a county route that runs south of I-70 in the Glenwood Canyon area, as a potential detour option. Fulton said Cottonwood Pass Road is currently unsuitable for trucks and noted it would need some widening, paving and geometric work to be appropriate for heavy vehicle use.

Patrick Zelinski, program manager for operations at the American Association of State Highway and Transportation Officials, indicated climate-related challenges such as the ones that contributed to these mudslides are factors state transportation agencies will likely continue to contend with.

“Something like a 500-year flood that we think comes every 500 years might be coming every 10 years now,” Zelinski, who serves on AASHTO’s Committee on Transportation System Security and Resilience, told TT. “These severe weather events are more and more frequent. We need to rethink how we look at them.”