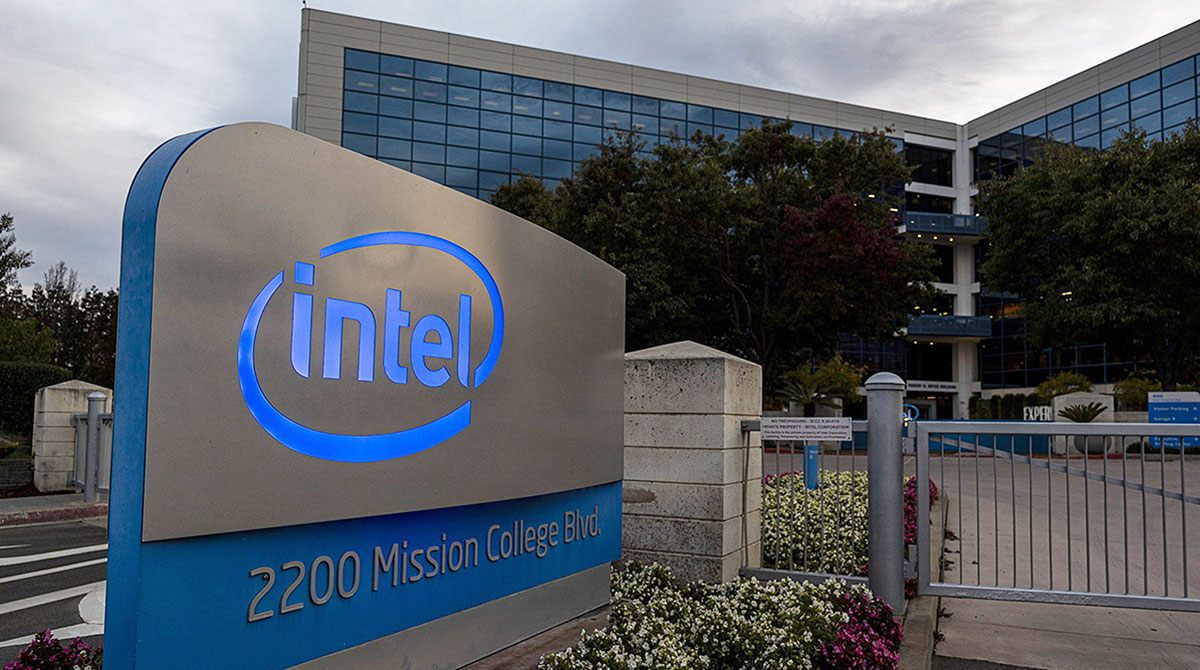 Signage at the entrance to the Intel headquarters in Santa Clara, Calif. (David Paul Morris/Bloomberg News)

COLUMBUS, Ohio — Intel will invest $20 billion in a new computer chip facility in Ohio amid a global shortage of microprocessors used in everything from phones and cars to video games.

After years of heavy reliance on Asia for the production of computer chips, vulnerability to shortages of the crucial components was exposed in the U.S. and Europe as they began to emerge economically from the pandemic.

The U.S. share of the worldwide chip manufacturing market has declined from 37% in 1990 to 12% today, according to the Semiconductor Industry Association, and shortages have become a potential risk.

Intel is in Ohio.

An investment of more than $20 billion in two new leading-edge chip factories will ensure reliable access to advanced #semiconductors.

Two chip factories on the 1,000-acre site in Licking County, just east of Columbus, are expected to create 3,000 company jobs and 7,000 construction jobs, and to support tens of thousands of additional jobs for suppliers and partners, the company and local and state officials announced Jan. 21.

Construction is expected to begin this year, with production coming online at the end of 2025.

Shortages of chips have crimped the ability of U.S. automakers to produce vehicles and last year, General Motors was unseated by Toyota as the nation’s top-selling automaker for the first time.

The U.S. and Europe are pushing to aggressively to build chipmaking capacity and reduce reliance on producers that now are mostly based in Asia.

Several chipmakers last year signaled an interest in expanding their American operations if the U.S. government is able to make it easier to build chip plants.

Chipmakers are diversifying their manufacturing sites in response to the shortages. Samsung said in November it plans to build a $17 billion factory outside of Austin, Texas.

Micron Technology, based in Boise, Idaho, said it will invest $150 billion globally over the next decade in developing its line of memory chips, with a potential U.S. manufacturing expansion if tax credits can help make up for the higher costs of American manufacturing.

However, demand for computer chips continues to grow.

Lawmakers have been urging House and Senate leaders to fully fund a law meant to address the semiconductor chip shortage. They want Congress to fully fund the $52 billion CHIPS for America Act, allowing for stateside investment in semiconductor factories. Not only has the chip shortage disrupted the U.S. economy, it is creating a vulnerability in the country’s defense system since eight of every 10 chips are produced in Asia, lawmakers say.

“Intel’s work is essential to our efforts to rebuild America’s chip building capacity and create the kinds of good-paying jobs that support a vibrant American economy,” she said.

The Intel project is the largest single private-sector investment in Ohio’s history, on par with an agreement in 1977 that brought Honda to central Ohio, where it now employs more than 14,000 people. The Intel jobs are expected to pay an average of $135,000 a year plus benefits, with the project slated to add $2.8 billion to the state’s annual gross product, Ohio Gov. Mike DeWine said in a statement.

Intel, based in Santa Clara, Calif., announced plans last year to spend $20 billion for two new factories in Arizona. It also is pitching for European subsidies to build a big plant somewhere within the European Union and last month said it will invest $7.1 billion to expand its decades-old manufacturing operation in Malaysia, home to about 10% of the company’s global workforce. Along with the U.S. and Malaysia, Intel has existing plants in Ireland, Israel, Vietnam and China.

— Matt O’Brien in Providence, R.I., contributed to this report.