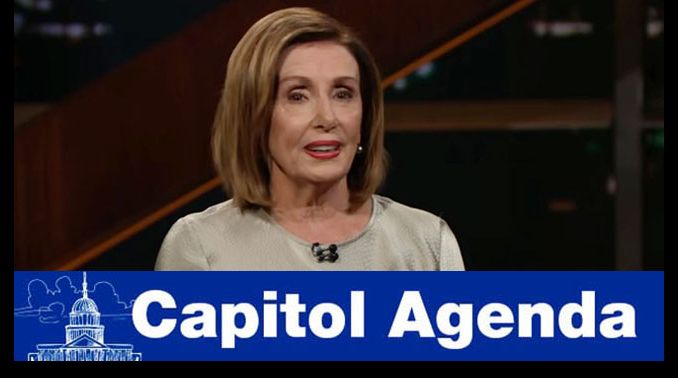 Speaker Nancy Pelosi says her caucus is making legislative room for a highway bill that would address climate change. (Real Time With Bill Maher via YouTube)

It’s Infrastructure Week, again. And, no, it’s not brought to you by President Donald Trump.

About a week ago, she told reporters that since the U.S. House had taken up big-picture policy measures, her caucus was now carving legislative room for a highway policy measure that would pay close attention to climate change. And, she would not wait for the White House to proceed with a measure.

“We thought we would be able to move in a positive way on this. So far they have not come on board. However, we decided now we’ll just have to go forward,” the speaker explained.

After Pelosi’s alert, congressional aides told Transport Topics details about a major highway bill could be released at any moment.

House Democrats appear determined to advance some sort of a measure. The Ways and Means Committee that oversees tax policy on Jan. 29 is scheduled to look into the thorny matter of highway funding. The Highway Trust Fund, which falls under the committee’s jurisdiction, relies on revenue from the federal fuel tax. That account is projected to run out of funds in 2021.

Among the experts scheduled to explain highway funding policy to House policymakers is Joung Lee, director of Policy and Government Relations at the American Association of State Highway and Transportation Officials, whose group has emphasized the need for addressing the trust fund’s looming insolvency. They’re urging Congress to avoid a scenario in which the account is kept operable through short-term increments. State transportation officials and governors insist long-term funding at the federal level is valued for planning purposes.

Also appearing before the Ways and Means panel will be DJ Gribbin, founder of Madrus and the Trump White House’s architect of its infrastructure plan that went nowhere in 2018. Gribbin championed a funding approach that promoted private sector involvement to assist with big-ticket highway projects. Lawmakers representing rural areas pushed back on Gribbin’s plan.

Rep. Sam Graves (R-Mo.), the House transportation panel’s ranking member, is not appearing before Ways and Means. He did, however, release findings of a report noting the potential of a vehicle-miles-traveled fee as a viable source of funding.

“The report clearly shows that transitioning to a VMT system is a more equitable way to charge drivers for the roads they use, and that we are in fact capable of beginning that transition now,” Graves said, referring to the Washington State Transportation Commission’s report.

Whatever the House transportation panel presents will be meant as an update of the FAST Act, a five-year highway law that expires in September. Last year, the Senate addressed an aspect of the FAST Act’s reauthorization. This version of Infrastructure Week notwithstanding, the fallout from the impeachment trial and the presidential contest in November diminishes the expectation that congressional leaders will act fast on a highway bill.

Jan. 28, 10 a.m.: The House Economic Development, Public Buildings, and Emergency Management Subcommittee has scheduled a hearing to review the Trump property at the Old Post Office Building in Washington.

Jan. 29, 10 a.m.: The Senate Environment and Public Works Committee meets for a hearing titled, “Stakeholder perspectives on the importance of the U.S. Chemical Safety and Hazard Investigation Board.” 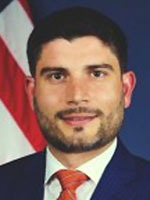 A long-term funding fix for the Highway Trust Fund appears to be on the radars of a top House Democrat and a Trump Cabinet official.

In his State of the Union next month, President Trump is expected to bring up infrastructure policy, sources tell us.

Black Mamba is no longer with us after dying in a helicopter crash in California that also took the lives of eight others. At Transport Topics, we take a moment to remember the great Kobe Bryant.

Conservative solutions to address carbon dioxide emissions do exist. However, new taxes and higher consumer energy costs are neither winning nor workable.

Thanks for reading Capitol Agenda. We publish weekly when Congress is in session. E-mail emulero@ttnews.com with tips. Follow us @eugenemulero and @transporttopics.