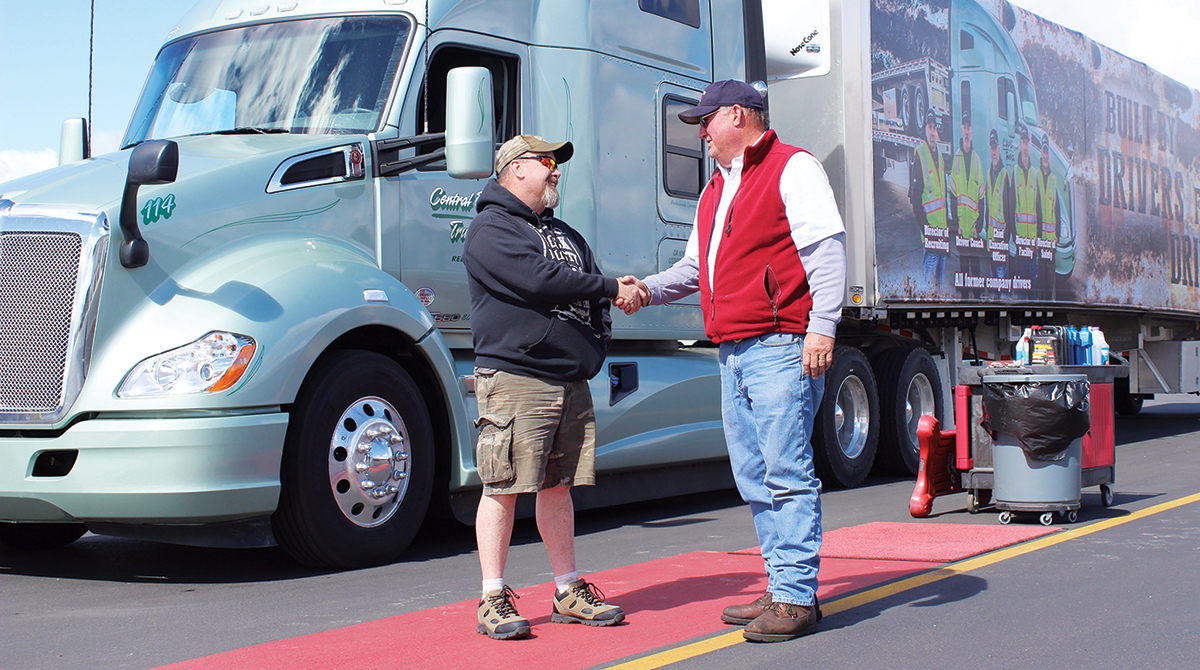 Truck drivers deliver virtually everything needed to sustain modern life, and Sept. 10-16 they are getting something in return: Thanks.

During National Truck Driver Appreciation Week that “thanks” will come in the form of highway billboards and company picnics, public proclamations and media interviews, and maybe a few extra hugs from family and friends.

At Fyda Freightliner truck dealerships in Ohio, Pennsylvania and Kentucky, drivers are encouraged to stop in for free food and gifts.

“It’s easy to get caught up in the daily grind, so we are looking forward to slowing down to say thank you,” said Carole Firth, marketing director for the Columbus, Ohio-based dealership. “Professional truck drivers keep this country moving forward.”

Truck stop operator Pilot Flying J Inc., which is based in Knoxville, Tenn., said it will celebrate Truck Driver Appreciation Week by giving away 100 million loyalty points that can be redeemed for goods and services valued at $1 million.

“The interstate is filled with hardworking professional drivers who make countless sacrifices to keep our economy moving and our ways of life possible,” Pilot Flying J President Ken Parent said. “We’re thrilled to show our gratitude by giving pro drivers points so they can spend them on the items and services they value most from our travel centers.”

The company will award more than 65,000 prizes, Parent said.

American Trucking Associations helped to launch a national week of recognition for truck drivers in 1988 as part of a campaign to enhance the public image of the industry.

In recent years, those efforts have coalesed around Trucking Moves America Forward, a fundraising and public education program.

Through TMAF, travelers in 13 states will see billboards with images of drivers and their families.

“The billboards talk about how pride runs in the family and thanking truck drivers for a great job,” ATA Chief Operating Officer Elisabeth Barna said. “We have a lot going on this year, and are very excited about it all.”

On Sept. 12, members of ATA’s America’s Road Team will be in Nashville, Tenn., to conduct satellite interviews with local and national media representatives. In addition, radio and TV spots thanking truck drivers are expected to air across the country, along with op-eds and letters to the editor.

ATA is working with members of Congress to honor truck drivers with remarks from the floor of the House and Senate as well.

And nationwide there will be more corporate actions:

Denny’s travel centers are giving drivers discounts on food and prizes, including a $500 gift card, throughout September.

“This serves as a small token of our appreciation for these drivers’ hard work and dedication,” said Steve Henry, senior director of field marketing for Denny’s in Spartanburg, S.C.

Rudolf Foods Co., which makes Southern Recipe pork rinds and other snack foods, invited drivers to submit photos of themselves and their rigs to win a $2,500 prize and a donation to the St. Christopher Truckers Development and Relief Fund, an organization that provides financial help to drivers in need.

“When it comes to the food industry, none of us would be here without our truck drivers,” said Mark Singleton, vice president of sales and marketing for Rudolph Foods. “Last year, we worked hard to raise awareness and support even more drivers. This year, we aim to make an even deeper impact.”

Jane Jazrawy, chief executive of CarriersEdge, a provider of online training to the trucking industry, said fleets that are celebrating drivers with cookouts and giveaways of hats and shirts this week need to show that commitment throughout the year.

“Most successful fleets do little things all the time to show their appreciation,” Jazrawy said. “Grand gestures that happen once a year can be undermined by daily frustrations and actions perceived as slights or insults.”

Fleets such as Central Oregon Truck Co. in Redmond, Ore., for instance, offer concierge services at terminals to help drivers with personal and professional services while they are on the road, discounted or free work gear or uniforms and vouchers for safety shoes and jeans.

“Those are perks that can noticeably decrease the cost of doing the job for drivers at those fleets,” Jazrawy said. “The point is show that they’re appreciated, which means showing that you think about them regularly and care about what they like and want.”

In honor of #NTDAW & for those #Truckers delivering much needed supplies to hurricane ravaged cities across the southern states. #ThankYou pic.twitter.com/yUVUdfgVNH

Our #FactsOfTheFreeway series highlights the importance of drivers as we approach #NTDAW 2017. Join us in saying "Thank you!" pic.twitter.com/DtCSYwoJUL

We LOVE #Truckers! Nominate a driver in your life as a #BigRigRockstar for a chance for them to win prizes: https://t.co/gfWFNnFlt2 #NTDAW pic.twitter.com/5GsWMpPoMW