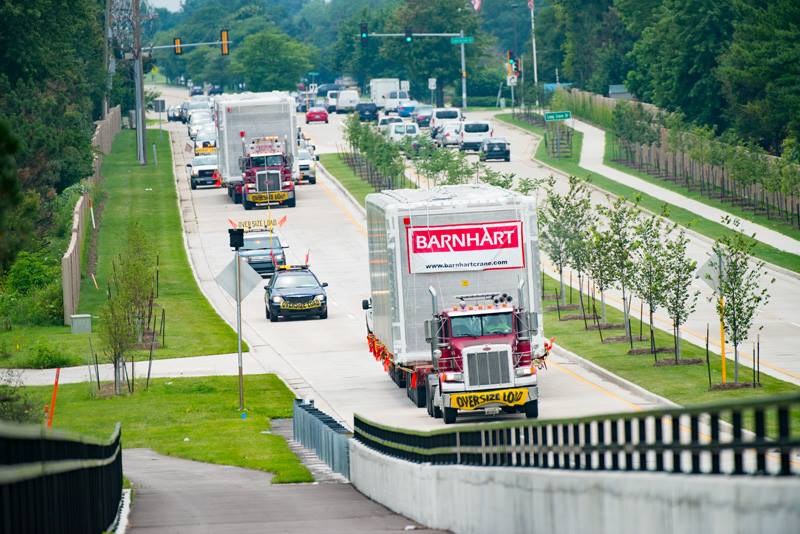 Ship traffic at the Port of Indiana-Burns Harbor was up 14% during the first six months of 2017 compared to the same period last year, with wind tower sections from Spain and Brazil and the world’s largest liquid argon particle hunter from Switzerland among the cargo arriving.

The port handled more than 1 million tons altogether in the six-month period, with increases in shipments of steel, coal and oils in addition to the heavy-lift cargoes, port officials said.

The particle hunter, called ICARUS, is the size of two semitrailers, port officials said. It’s used by particle physicists to study neutrinos, subatomic particles that are smaller than any other known particle, officials said.

“ICARUS left the CERN physics laboratory in Geneva, Switzerland, on June 10, arrived at the Burns Harbor port on July 11 and then was trucked the last 80 miles to its final destination in the U.S. Dept. of Energy’s Fermi National Accelerator Laboratory in Batavia, Ill., on July 26,” a port statement read.

#TBT to... the arrival of the ICARUS detector yesterday, because we have fresh photos to share. https://t.co/V2jqICogut #IcarusTrip pic.twitter.com/cWsLCB39kv

The Muon g-2 magnet arrived at Fermilab on July 26, 2013, and today we welcomed the ICARUS detector! July 26 is our #luckyday #IcarusTrip pic.twitter.com/tocRU4nT0C

ICARUS is still in Burns Harbor - due to arrive @Fermilab 26 July early morning US time. What a long #IcarusTrip! pic.twitter.com/Ngii5zOYQV

“The ICARUS shipment was a major highlight for the Burns Harbor port because it involved one of the most important scientific instruments in the world and had a tremendous following on Twitter,” Allen said.

He said project cargo shipments, such as ICARUS, were up more than 300% compared to the first six months in 2016, but still represent a small percentage of the port’s total cargo volume.

Allen said more than half of the port’s cargoes are related to the steel industry, including both in-bound and out-bound shipments of steel-related products for domestic and international markets.

International shipments of semi-finished steel generally come from Europe and are used by steel processing companies in Northwest Indiana, Chicago and elsewhere in the Midwest, primarily for the automotive, appliance and construction industries.

The Port of Indiana’s three ports together had shipments that totaled nearly 5.7 million tons, a 19% increase over the first six months of 2016, port officials said.

“This was the second highest volume during the first two quarters of any year in the organization’s history,” a port release stated.

The overall growth was primarily due to increased shipments of coal, ethanol, fertilizer, minerals and steel, officials said.

The Port of Indiana-Mount Vernon handled 3.4 million tons, an increase of almost 38%.

The Jeffersonville port handled nearly 1.2 million tons during the six-month period, putting it on track to exceed 2 million tons for the fourth consecutive year.