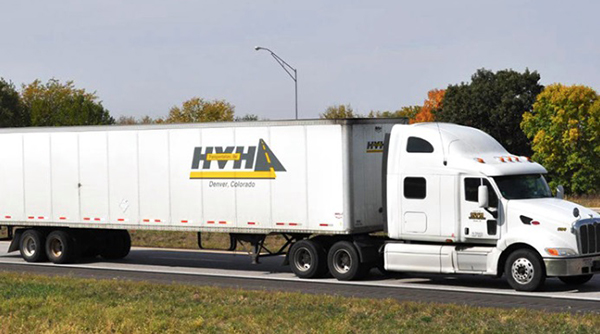 The medium-sized fleet had more than 120 drivers along with 250 contracted owner-operators, in addition to 75 office employees, CEO John Kenneally told TT.

The asset-light company owns about 20 tractors and a terminal in Henderson, Colo., and the remainder of its fleet of 380 trucks is leased through Penske Truck Leasing Corp. and Ryder System Inc., he said.

Drivers’ fuel cards were shut off as a result of the closure, stranding some of them in the middle of their deliveries. Kenneally on Aug. 29 said he was working to reinstate the fuel cards and help drivers complete their deliveries and get them paid.

HVH driver Travis Sikes of Eufaula, Ala., said he was hauling a load of beer for C.H. Robinson Worldwide from Denver to Laredo, Texas on Aug. 27 when a friend called to tell him that HVH had closed.

Sikes withdrew money from his own account and drove to the home of a relative in Wyoming while waiting to hear from either C.H. Robinson or HVH. Sikes said he is concerned about having to pay for fuel for the deadhead drive back to his Alabama home. His truck is part of a lease-purchase program.

C.H. Robinson has been working to help some drivers get the fuel they need to complete their runs. “We are providing fuel advances on a case-by-case basis to help meet delivery requirements for our customers,” said Tom Perlin, C.H. Robinson corporate capacity manager.

Enzo Pallette, an HVH company driver, heard of the closure through a friend, but said that he still delivered his last load — a shipment of paper delivered on Aug. 28 in Yakima, Wash. The next day, however, he was trying to get home to Los Angeles County, and had just 40 gallons of fuel as he neared Bend, Ore.

“I don’t know what I am going to do after that,” Pallette said. He doesn’t own or lease the truck.

Penske said drivers on the road should turn in their vehicles.

“Penske Truck Leasing can confirm that HVH Transportation is a customer and that it has begun repossessing its units,” said Randolph Ryerson, a Penske spokesman. “Any HVH Transportation drivers with Penske units still in their possession should turn in vehicles to their nearest Penske location or call.”

Kenneally said higher insurance rates slammed the company as summer approached. While HVH had been paying $150,000 a month with a $100,000 deductible, he said the insurer raised the monthly rate to $358,000 and also asked for a $750,000 payment to write the policy. Kenneally said the increased liability costs hurt HVH’s cash flow.

On top of that, the company’s bank froze its assets in late August after its liquidity dipped below $500,000 — the second time this had happened, a senior company official said. The first time was in March. This occurrence forced the closure, the official said.

The company is owned by HCI Equity Partners, a financial firm with offices in Washington, Chicago and Minneapolis. HCI referred TT back to Kenneally.

Shari Lee Campbell, a laid-off HVH driver manager from Denver, said once she learned the company was folding she began calling drivers urging them to fuel up so they could make it home. A company manager directed Campbell to stop calling drivers and to go home, she said. Once there, Campbell said she continued calling drivers for fear that their fuel cards would be shut off.

Campbell also said the company’s cash flow was a problem. “They ran out of money,” she said.