A Hurricane Ida Unknown: Economic Impact on Region, US 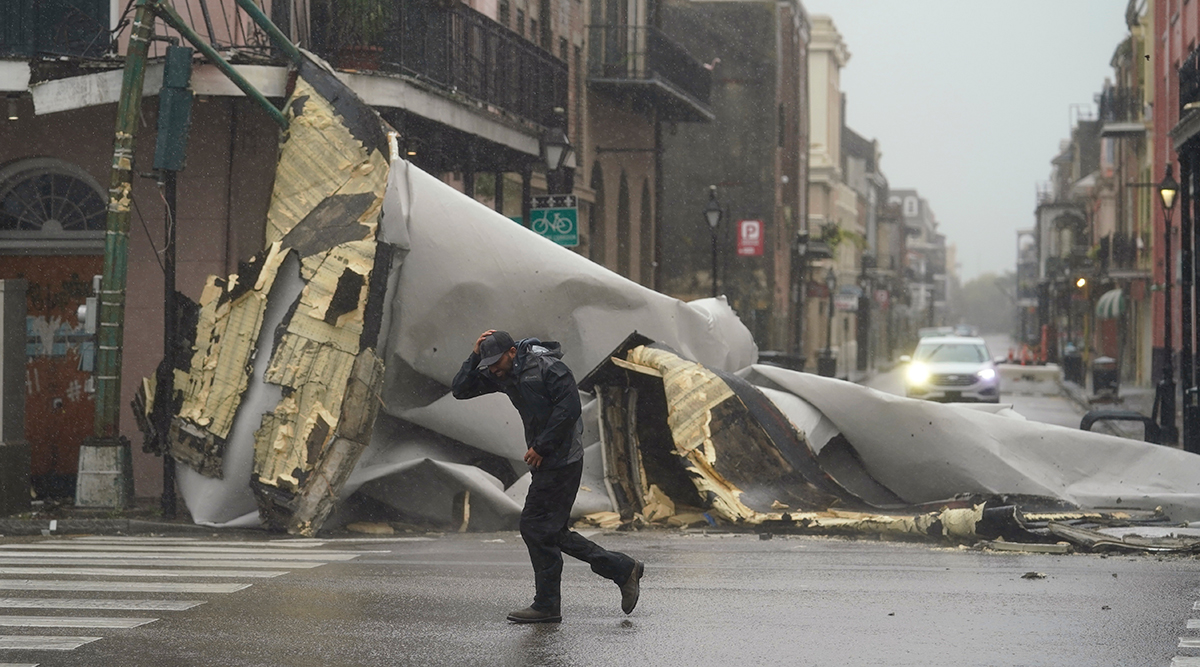 A man in New Orleans' French Quarter passes by a section of roof blown off by Hurricane Ida Sunday. (Eric Gay/Associated Press)

Hurricane Ida, bearing high winds and the likelihood of flooding rain as it strikes the Louisiana coast, could damage the energy-heavy Gulf Coast economy and potentially have economic consequences well beyond the region.

The Gulf is not only a major base for oil and natural gas companies but also a vital hub for the nation’s chemical and shipping industries.

Companies evacuated oil and gas platforms south of Louisiana ahead of the hurricane. But a far greater worry was potential damage to refineries and petrochemical plants in its projected path from flooding and storm surge.

Nearly 300 offshore platforms — or half the manned platforms in the Gulf of Mexico — were evacuated ahead of the storm, their production temporarily halted, the U.S. Bureau of Safety and Environmental Enforcement said on its website Aug. 28. Floating rigs also cleared out. In all, more than 80% of gulf oil and gas production halted, the agency said.

But a potentially more serious concern was the fate of refineries and petrochemical plants along the Mississippi River between Baton Rouge and New Orleans in or near the path of a storm whose maximum sustained winds reached 150 mph (Category 4) at landfall Aug. 29.

Louisiana’s 17 oil refineries account for nearly one-fifth of the nation’s refining capacity and can process about 3.4 million barrels of crude per day, according to the Energy Information Administration. Many could be vulnerable to flooding. The EIA said Ida could affect local energy supply — especially transportation fuel and electricity.

Less clear is whether the domestic fuel supply might be affected. U.S. daily oil consumption is a little under 20 million barrels a day. Analysts said it was too early to say, though S&P Global Platts said the storm could halt production of 765,000 barrels a day in gulf output.

FEMA assistance arrived in Alexandria, Louisiana for Hurricane Ida, with supply trucks and generators being shipped to the state in preparation of the storm's impact. https://t.co/cA5u8FofJl pic.twitter.com/A0mKJ1RZQy

It was not immediately clear how many refineries and petrochemical plants might be shut down.

Phillips 66 was halting production at its refinery on the Mississippi just south of New Orleans in Belle Chasse, La., due in part to “the potential for storm surge,” said company spokesman Bernardo Fallas. It’s daily capacity is 250,000 barrels.

Exxon Mobil said its Baton Rouge refinery, which produces about 520,000 barrels of crude daily, continued to operate while Chevron said it had shut down operations at terminals on the Mississippi River and gulf coast and their related pipeline systems. Shell, Marathon and Valero also have refineries close to the storm’s projected path.

“The industry has been through this maybe too many times over the last few decades,” Peter McNally, an energy analyst at Third Bridge, said of the hurricane. Several refineries in Lake Charles, west of Ida’s projected path, suffered wind damage in Hurricane Laura almost exactly a year ago.

Meteorologist Jeff Masters, who flew hurricane missions for the government and founded Weather Underground, said Ida is forecast to move through “the just absolute worst place for a hurricane.”

While refineries and petrochemical plants are generally built to withstand high winds, they are not necessarily prepared for high water, an increasing problem as global warming spurs higher rainfall amounts in big storms.

McNally said the industry is most concerned about flooding, which is what caused so much havoc in 2017 with Hurricane Harvey in the Houston area, where petroleum products were spilled at flooded tanker and chemical plants.

”Louisiana is low, so you are prone to the flooding. These things are built to withstand winds but it’s flooding you have tougher time dealing with,” he said.

Sixty percent of the gasoline used on the East Coast is shipped from the Gulf Coast, much of it through the Colonial Pipeline, which is in the storm’s path.