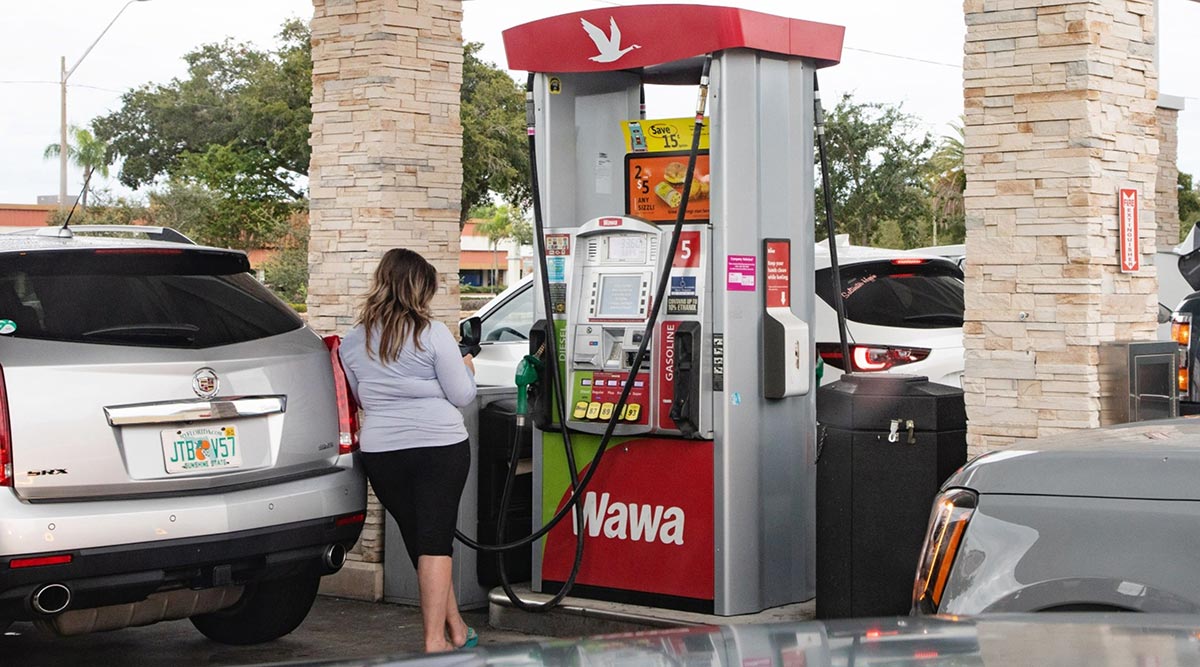 Hurricane Ian is poised to become one of the costliest storms in U.S. history, threatening to slam Florida’s western coastline with 125 mph winds.

The storm, which has already battered Cuba, has top winds near 120 mph as it swirls over the southeastern Gulf of Mexico, about 230 miles from Sarasota, Fla., according to an advisory from the U.S. National Hurricane Center at 5 p.m. EDT. The storm is forecast to strengthen through Sept. 28, bringing threats of 6-foot storm surges into Tampa Bay and heavy rains across the U.S. Southeast.

Damages and economic losses in the area could reach $45 billion to $70 billion if the current forecast comes to pass, said Chuck Watson, a disaster modeler with Enki Research. The top end of that range would rank Ian as the sixth-costliest U.S. hurricane, according to data from the National Oceanic and Atmospheric Administration.

The storm comes as climate change fuels extreme weather worldwide, including hurricanes that rapidly gain strength as they approach land. The year has already brought deadly flooding in Kentucky, a European heat wave that killed more than 2,000 people in Portugal and Spain, more relentless drought gripping the Western U.S. and a major hurricane that left catastrophic damage from Puerto Rico to Atlantic Canada — each disaster exacting its own human and financial toll.

Hurricane force winds extend out 35 miles from the center and tropical storm-strength winds reach out 140 miles, the agency said. Florida Keys should feel the wind starting later Sept 27. Some parts of central Florida could get two feet of rain. 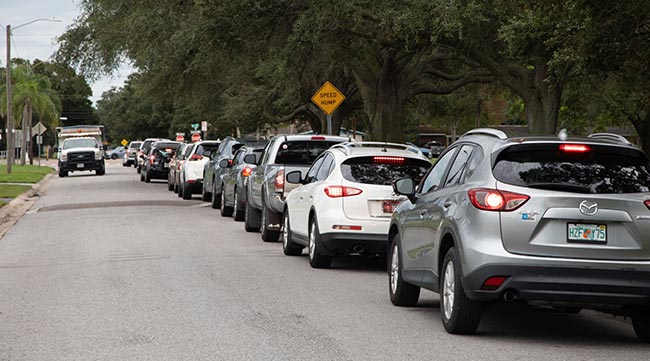 President Joe Biden told media at a Washington, D.C., event that he approved Florida requests for emergency assistance. The Federal Emergency Management Agency has deployed 700 personnel to Florida and its governor activated 5,000 from the state’s National Guard with another 2,000 expected from other states, Biden said.

Beyond the confines of Florida and neighboring states, the storm appears likely to intensify food inflation as Ian takes direct aim on crucial orange-growing and fertilizer-manufacturing zones.

Nearly the entire Florida peninsula is under a tropical storm or hurricane warning.

Check on your friends and neighbors. Make sure your family and home are prepped. Above all, stay safe by staying informed. We're LIVE. pic.twitter.com/mSwd5sBNPL — The Weather Channel (@weatherchannel) September 27, 2022

Ian’s winds are forecast to peak at 130 mph in the next 12 to 24 hours, making it a Category 4 storm on the five-step, Saffir-Simpson scale, the hurricane center said. With its track veering toward Florida’s west coast, Ian will have less time to weaken and it will likely be a Category 3 — a major hurricane — when it hits the Sunshine State, according to Adam Douty, a meteorologist with AccuWeather Inc.

Florida Gov. Ron DeSantis said in a Sept. 27 morning briefing that Ian is projected to strike south of Tampa Bay, with officials identifying Venice for the landfall around 8 p.m. Sept. 28 with winds of 125 mph. 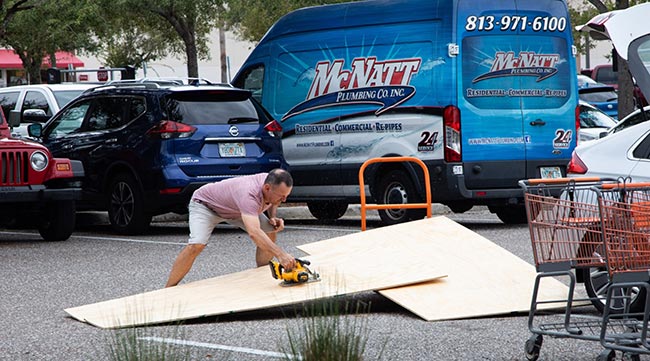 A shopper cuts plywood outside a Home Depot ahead of Hurricane Ian in St. Petersburg, Fla. (Tristan Wheelock/Bloomberg News)

The precise location could mean everything to Tampa, Douty said. A landfall north of Tampa Bay would slam the city with a flooding wall of water, while a landing zone farther south would be less dire for Tampa and more of a threat to Sarasota and Fort Myers.

“Tampa may end up avoiding the worst-case scenario, but it looks like it is going to be pretty close,” Douty said. “By the time it is clear to determine where it is going to make landfall it will be too late to evacuate or make preparations.”

The storm will bring as much as 25 inches of rain across Florida, in addition to any surge pushed on shore, Douty said. About half of all hurricane fatalities come from flooding.

Tampa and the surrounding region has been preparing for the storm since Sept. 26, with evacuation orders in place. Tampa Electric is proactively cutting power to low-lying areas of downtown Tampa later Sept. 27 to avoid serious damage to its equipment from a saltwater surge.

Grateful to our @FloridaTrucking partners and the truck drivers that are filling their rigs with fuel to transport to gas stations, and our @PortTampaBay on-port workers assisting. These folks are hustling to make this happens before conditions worsen. #FlaPol pic.twitter.com/NT34RfBZDb — FloridaPortsCouncil (@FloridaPorts) September 27, 2022

Tampa International Airport was to suspend operations at 5 p.m. Sept. 27, and American Airlines Group Inc. issued a travel alert for 20 airports in the western Caribbean and Florida. More than 80% of Sept. 28’s flights from Tampa have been canceled, according to FlightAware, an airline tracking company. Orlando International Airport said in a Twitter post that it is shutting operations as of 10:30 a.m. Sept. 28 due to the storm.

Florida fuel supplier Mansfield Energy Corp. raised its supply alert level to “code red” for the state, requiring a 72-hour notice of new deliveries as pre-storm demand strains supply, the company said in a note to customers. Some fuel terminals near Tampa closed the morning of Sept. 27, with more closures coming Sept. 28, which means fuel deliveries will have to be made from more distant terminals.