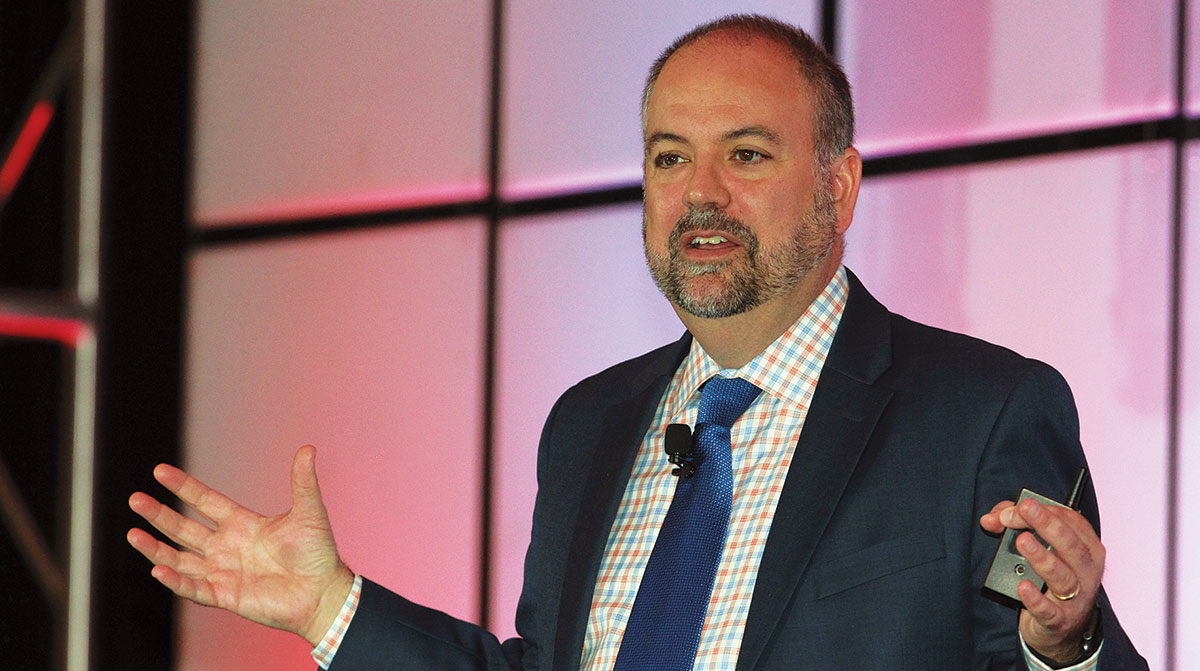 “Demand is there. No doubt about it, because the underlying drivers of growth are there. But we have got a supply chain problem," ATA's Bob Costello says. (John Sommers II for Transport Topics)

Costello prefers to look at household consumption, construction activity and industrial production to gauge how the industry is faring. All of these areas have been strong, but supply chain issues and a lack of trucking capacity have been driving down loads.

“Demand is there,” Costello said during a webinar to discuss the state of the economy and trucking. “No doubt about it, because the underlying drivers of growth are there. But we have got a supply chain problem, and that’s really our biggest constraint in the industry at the moment.” 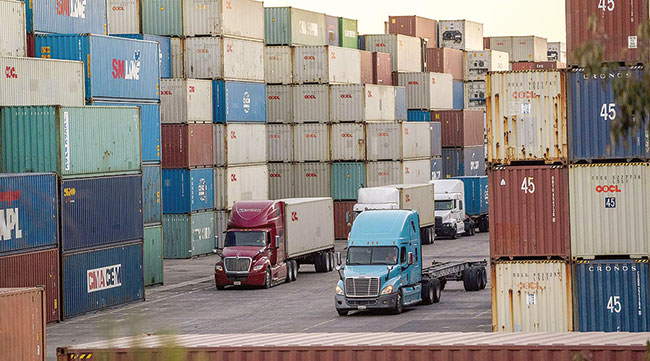 Containers stacked at the Port of Los Angeles cast a spotlight on the nation's supply chain. (Kyle Grillot/Bloomberg News)

Costello noted that in the past six months the industry has recouped about half of what it lost from early 2020 through midyear 2021, yet is still off about 5% from before the pandemic. In 2020, contracted freight was down 1.2% from the prior year. It also was down 3.2% last year, though there were improvements in the fourth quarter.

Costello added that the spot market has been surging because there is a lot of freight there simply trying to get covered. He noted that in January it was up almost a 100% year-over-year. He also indicated this shows demand is not the issue,

“Demand is strong,” Costello said. “I just went through all the drivers of demand for our industry. It’s a supply problem, and that’s really what we have. Now as demand is strong and supply is constricted, what happens to price? It goes up.”

Less-than-truckload has been somewhat of an outlier as these carriers are seeing volumes go up. Costello said they also have supply issues, but what they face hasn’t been as bad as what the over-the-road, for-hire truckload carriers have been dealing with. E-commerce being strong has benefited them, too. Some shippers also have used them for excess freight alongside the spot market.

“They’re benefiting from a lot of different sources of volumes here,” Costello said. “And, of course, their numbers are up as well. Their pricing is up as measured by average revenue per ton. So I don’t think a big surprise here.”

Costello pointed to a decline in equipment as being a major problem. He surveyed fleets and found the percent change in power units for truckload carriers was off more than 5% last year. He believes this was due to a surge in used truck prices and the shortage of drivers. Fleets likely considered those factors and decided it was a good time to offload older trucks that were just parked because they didn’t have enough drivers.

“Capacity is down,” Costello said. “No doubt about it. I just don’t know that usable capacity was down 5%. It’s got to be less than that. Nevertheless, I do think this group is shrinking overall. And if you look at the publicly traded truckload carriers and they report their tractor counts, even accounting for any acquisitions and so forth with a couple exceptions, they’re down.”

Costello added the driver shortage is being driven by a lot of factors such as demographics and high average age. He noted women are only 8% of all drivers, which means the industry is missing out on a big part of the labor force. He also noted many might be discouraged from the lifestyle and by other issues that make it hard to recruit and retain drivers, such as wait times at facilities and a lack of parking.

“Truck driver training schools are up to full capacity,” Costello said. “But in 2020 they weren’t, and that’s still a hole we’re trying to dig out of because of the pandemic. And then we had drivers leave. Anyways, you add it all up and we’ve got a driver shortage that is the worst we’ve ever seen. It did improve a little bit in 2019. In 2020, it came up but not back to '18 levels. But now we’re up to 80,123, I think, the driver shortage exactly is. And the trend line isn’t good. Listen, if we get to 160,000 short, we’re in big trouble.”

Today we signed a historic agreement with @USDOL establishing ATA as an official registered #apprenticeship sponsor. We’ve been working toward this day for some time, and it marks a major victory for our association. https://t.co/htTRv2g1CR — American Trucking (@TRUCKINGdotORG) March 2, 2022

Costello pointed to efforts to help bring new drivers into the industry. The U.S. Department of Transportation and the U.S. Department of Labor launched an apprenticeship program focused on 18- to 20-year-olds. That age group has previously been prohibited from operating a Class 8 truck in interstate commerce. The program is limited to 3,000 participants, but it could address the shortage while showing that younger drivers can operate big rigs safely with proper training.