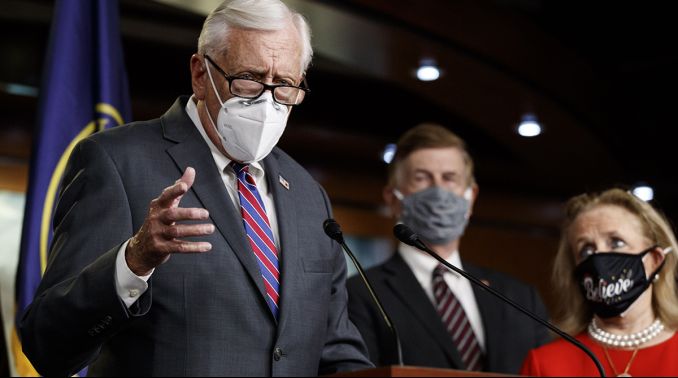 A surprise scuffle over pandemic relief is set to run up against a crucial federal funding deadline the week of Dec. 28 as Democrats side with President Donald Trump in his demand for $2,000 payments to most Americans and Republicans take up his criticism of government spending.

Republicans on Dec. 24 objected to House Majority Leader Steny Hoyer’s attempt to replace the $600 payments in the latest pandemic relief legislation with the $2,000 payments Trump said he wants. Democrats will try again Dec. 28, with a similar new bill that will be put to a full vote on the House floor.

Congressional leaders reached a deal on a roughly $900 billion spending package to bolster the U.S. economy amid the continued coronavirus pandemic, giving lawmakers a short timetable to review and pass the second-largest economic-rescue measure in the nation’s history.

The standoff over stimulus payments comes after months of intense negotiations finally yielded a compromise to inject $900 billion into the U.S. economy — including forgivable loans for small businesses, supplemental unemployment benefits, support for renters facing eviction and funds for vaccine distribution. Those measures were combined with $1.4 trillion in annual government spending, and now the entire package is in limbo.

Although Trump hasn’t explicitly said he would veto the legislation, if he doesn’t sign the bill by the end of day Dec. 28, the government — now operating under temporary funding — would begin a partial shutdown starting on Dec. 29. The House may attempt to pass another stopgap funding measure on Dec. 28 if Trump hasn’t acted.

The president tweeted a video Dec. 22 criticizing the $2.3 trillion bill. His call for $2,000 payments, which most Republicans rejected as too costly, surprised GOP lawmakers. Trump left Washington Dec. 23 to spend Christmas at his Florida golf club.

“Republicans in Congress and the White House can’t agree on what they want,” Hoyer told reporters Dec. 24 at the Capitol. “Surely, the president of the United States, whether he is in Mar-a-Lago or someplace else, ought to empathize with the suffering and apprehension and deep angst people are feeling this Christmas Eve.”

— With assistance from Laura Davison.