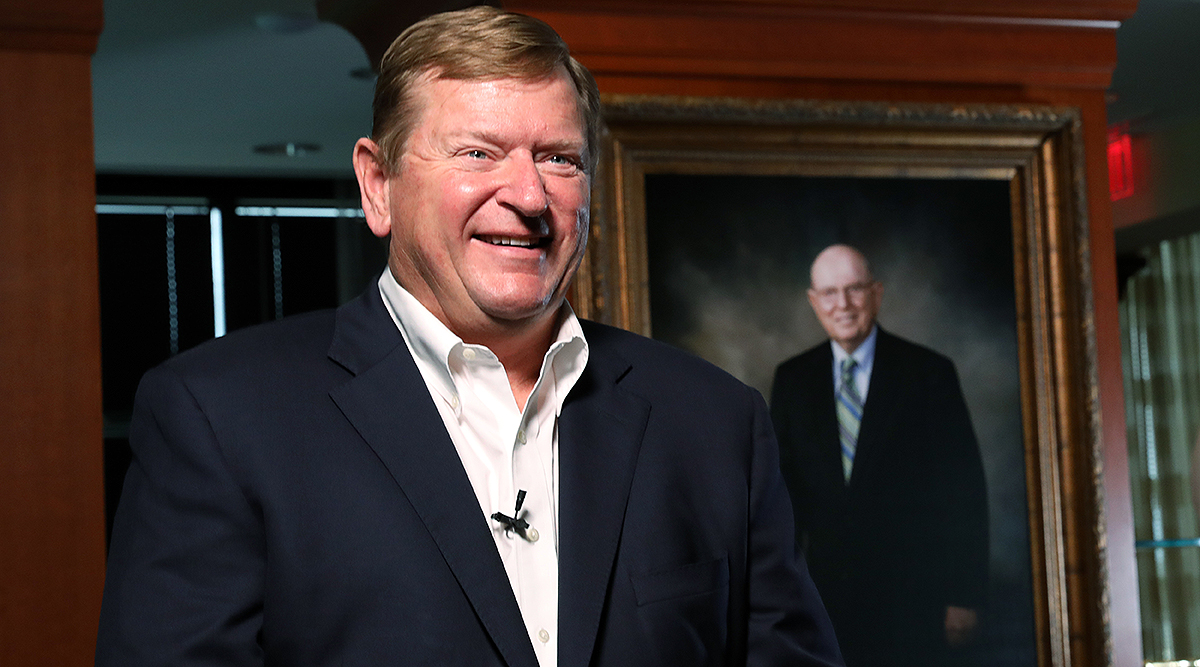 For much of Harold Sumerford Jr.’s adult life, he has risen at 4:30 each morning and worked 11 hours a day, six days a week. But it’s never felt like the daily grind.

“I’ve been doing this for 43 years,” said Sumerford, CEO of Birmingham, Ala.-based J&M Tank Lines and newly confirmed chairman of American Trucking Associations. “But I’ve never, ever felt like I went to work a day in my life.”

Sumerford was sworn in as chairman Oct. 26 at ATA’s Management Conference & Exhibition in Nashville, Tenn.

As the new public face of trucking, Sumerford likely will be spending equally long hours traveling the country to keep politicians and ATA members informed on the critical issues on his agenda.

Associates and friends say there isn’t a better man to serve as the 77th ATA chairman, and advocate for the industry he so loves. 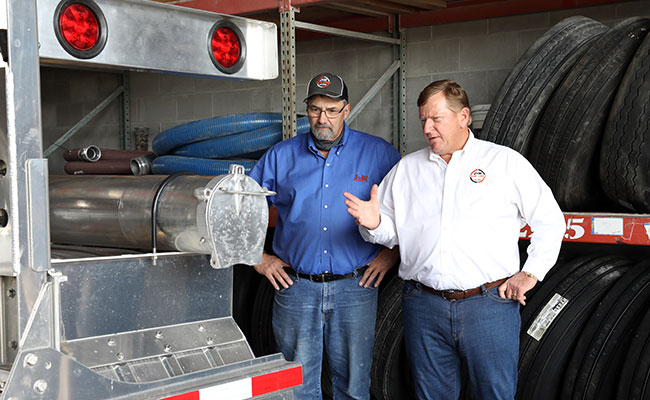 “I think he is someone who cares deeply about the opinions of others, so much so that the lengths that Harold goes to acquire a consensus are impressive,” ATA President Chris Spear said. “He really does a lot of outreach, some of it well in advance of a decision getting made because he wants to understand the broader viewpoints, the implications of an issue before rendering a decision. That’s the mark of a really good leader.”

Spear said the success of J&M Tank Lines and Sumerford’s public service with an array of state and national trucking associations is an indicator of his work ethic.

“He’s very engaged with creating a better, amplified narrative for the industry,” Spear said. “You don’t get there by taking a back seat. What an honor for all of us to have somebody that is committed to serve in that capacity.”

“He’s at the same time a visionary — can see big things in the future — and an operator,” Alabama Trucking Association President Mark Colson said. “He understands personal politics, intergovernmental politics, and the trucking industry — backwards and forwards.”

“He has earned his stripes at every level,” said Ed Crowell, president of the Georgia Motor Trucking Association. “He didn’t just wake up as CEO of J&M. He worked his way up.” 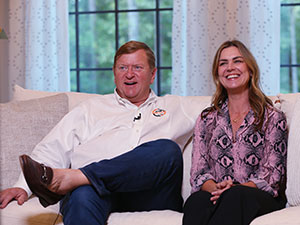 Sumerford, 60, is married to Shannon Sumerford, and has five daughters from ages 19 to 43, and six grandchildren. He started working for the company on a part-time basis after school, on weekends and during the summer when he was a teenager. His father, Harold Sr., became a partner in the business in 1960. By 1982, he had purchased all the company stock. When Harold Sr. went into semi-retirement in 2003, the family sold most of its rolling stock but kept the tanker side of the business.

“We felt we could do a better job with just tankers,” Sumerford said. In 2014, he and his brother, Peter, bought the family out of the business.

Early on, the newly focused company centered much of its business in Georgia and Alabama. Currently, J&M has 552 employees and 11 terminals, including locations in Chicago, Texas, Maryland and South Carolina. With 415 tractors and 720 tanks, the company handles transportation of dry and liquid products.

"We started as a family and we'll remain a family! J&M Tank Lines is blessed to have grown into what it is today. While we hope to continue growing, we will focus on the family values that started it all."

Sumerford is a past Chairman of the Georgia Motor Trucking Association and NTTC. During his 2015-16 run with NTTC, he kept the association running smoothly during some tough times for tank truckers.

“It’s sad that some people don’t get involved in associations, and it is because they don’t know what they’re missing,” Sumerford said. “The networking is just unbelievable.”

“I think he sees the big picture,” Streblow said. “Harold definitely looks at the industry from a 30,000-foot view and was able to assist us connecting the dots on various regulatory issues.” Sumerford is focused on the current challenges facing trucking.

Congratulations to our new chairman, Harold Sumerford Jr., CEO of J&M Tank Lines out of Birmingham, Alabama. Harold is a trucking lifer, having grown up in the family business founded by his father, which he now runs today with his brother. #ATAmce21 pic.twitter.com/9m7z23emx6 — American Trucking (@TRUCKINGdotORG) October 27, 2021

“The industry is stressed right now with capacity issues as well as issues for getting trucks parked, and even getting new trucks,” he said. “I had 50 trucks ordered for Q3. I’ll be lucky to get half of them by the end of the year. And those that I ordered for next year, they're saying you’re in line but we can’t tell you when next year you’ll get those trucks.”

He added, “The backlog is incredible. And we can’t get drivers to deliver the products. There’s a lot of things we need to figure out quickly. But one thing about trucking people: We’re very resilient. With all the things that get tossed at us, we generally will find out a way to overcome them.”

Several of his associates say Sumerford is primed and ready to continue giving back to the industry — like he always has — just now at the highest level.

“I believe he’ll be one of the best ATA chairmen ever,” said Dean Kaplan, CEO of Toledo, Ohio-based K-Limited Carrier. “Harold is one of the finest gentlemen I’ve ever met.”

Kaplan, one of the executives who recommended Sumerford to ATA’s nominating committee, said Sumerford has more than proved his mettle. “Harold’s practical, and he’s a hands-on leader,” Kaplan said. “He’s got a solid ear, he’ll listen to you. He’s just a very knowledgeable businessman.”

“We have lots of things going on with labor and COVID and vaccine mandates, and on and on,” Kaplan added. “I think he’s well-positioned to attack these challenges head-on. He’s already involved with lawsuit reform. His commitment to advocacy, which is critically important in the trucking industry, is second to none.”

“He leads his company with honesty and integrity,” added Todd Rice, executive vice president of Kansas City, Mo.-based MHC Kenworth Truck Sales. “He and his team do what they say every day. They take care of their customers and suppliers better than their competition.”

Rice said Sumerford has sold more trucks for Kenworth than him.

“He just took us under his wing and believed in our product and he introduced us to a lot of carriers who followed suit because he got us in the door. That’s how he is.”

Those who know Sumerford also say his work ethic is unrivaled, as evidenced by his long hours either at the office or working from home. “I can’t tell you how many emails or voicemails I’ve gotten from him at some ungodly hour. Especially early in the morning,” Kaplan said. 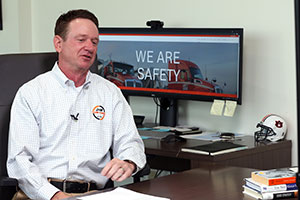 Peter Sumerford, J&M's director of sales, in his office at the Birmingham headquarters. (John Sommers II for Transport Topics)

“Even when Harold was a teenager, he was never one to sit still,” said his younger brother, Peter. “He was just never one to sit around the house and watch a Braves game. He’s always been that way, even as a kid. As soon as he got a car, he was always gone somewhere.”

Those who know Sumerford note he has deftly and with a cool head handled a number of challenges for J&M in recent years. When the company’s terminal trucks were tire-high in water during a Houston hurricane flood, he got them running again in no time. And when J&M’s computers were hacked twice, he made sure to get them back in working order in only a few days without paying a huge ransom. 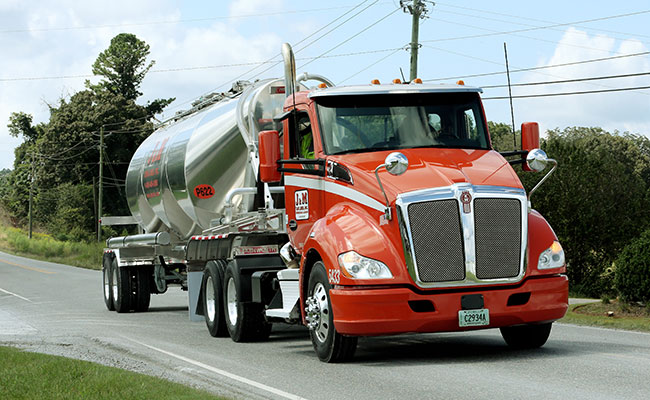 He also had to demonstrate to ATA leadership that he had the right stuff to be a chairman by effectively “going through the chairs” as the process is known— from second vice chairman and first vice chairman before becoming chairman. Sumerford is grateful for the input two previous chairmen, Tommy Hodges, chairman of Titan Transfer Inc.; and Phil Byrd, CEO of Bulldog Hiway Express, offered to him along the way.

“I’m not a micromanager,” Sumerford said. “I’m an accountant by trade. I like to give people an idea of what I think. I like to manage people at the 30,000-foot elevation. But I do expect for things to be right.”

If this company does good, it provides for our family.

As for the long hours at the office, he said his wife and daughters have always known he is very involved in the industry.

“If this company does good, it provides for our family,” he said. “I missed some things when the kids were growing up. But at the end of the day, they all knew that my efforts were to help them have a better life.”

Peter Sumerford said his brother is a strategic thinker.

“He’s data-driven,” Peter said. “He thinks a lot. If you don’t know him, sometimes you wonder if he’s listening. But here’s the catch: He is listening. He’s listening to gather all the data he needs to make a decision — whether it’s something you’re asking about, or if it’s something he’s trying to figure out and he’s coming to you for input.”

Peter added his brother is not wed to doing things the way they have been done in the past.

Peter added, “When faced with a crisis, he functions very well, and is very calm.” 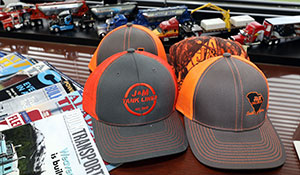 Whether a businessman, family man, cook or one who loves to entertain, Harold Sumerford Jr. wears many hats. (John Sommers II for Transport Topics)

Despite the commitment to work, associates describe Sumerford as a family man. His wife, Shannon, said he loves to cook, and loves to entertain.

“Most people don’t know about his exceptional tailgate parties,” she said. “We have customer events all the time, like taking them to NASCAR races or football games. I feel like you’re lucky if you get to come to one of our tailgates.”

The family spends weekends in the summer at their place at Smith Lake, north of Birmingham, and a home in Destin, Fla. Sumerford also likes to go boating, fishing, and hunting quail, dove and pheasant.

“But if you ever go hunting with him, don’t stand next to him because you’ll never shoot a bird,” Rice said. “He’s that good of a shot. He’s competitive.”