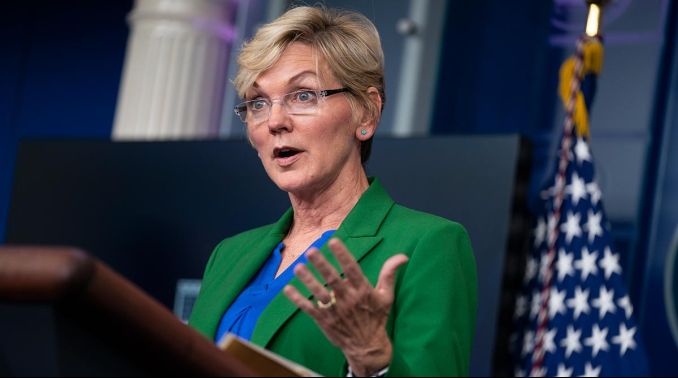 WASHINGTON — Energy Secretary Jennifer Granholm says the nation is “over the hump” on gas shortages following a ransomware cyberattack that forced a shutdown of the nation’s largest gasoline pipeline.

Problems peaked the night of May 13, and service should return to normal in most areas by the end of the weekend, Granholm said May 14 in an interview with The Associated Press.

“The good news is that … gas station outages are down about 12% from the peak” as of May 14, with about 200 stations returning to service every hour, she said. “It’s still going to work its way through the system over the next few days, but we should be back to normal fairly soon.”

A cyberattack by hackers who lock up computer systems and demand a ransom to release them hit the Colonial Pipeline on May 7. The hackers didn’t take control of pipeline operations, but the Georgia-based company shut it down to prevent malware from affecting industrial control systems.

The Colonial Pipeline stretches from Texas to New Jersey and delivers about 45% of the gasoline consumed on the East Coast. The shutdown has caused shortages at the pumps throughout the South and emptied stations in the Washington, D.C., area.

President Joe Biden said U.S. officials do not believe the Russian government was involved, but said “we do have strong reason to believe that the criminals who did the attack are living in Russia.”

As Colonial reported making “substantial progress” May 14 in restoring full service, two people briefed on the matter confirmed the company had paid a ransom of about $5 million.

Granholm, like other Biden administration officials, urged drivers not to panic or hoard gasoline.

“Really, the gasoline is coming,” she said. “If you take more than what you need, it becomes a self-fulfilling prophecy in terms of the shortages. Let’s share a little bit with our neighbors and everybody should know that it’s going to be OK in the next few days.”

Granholm’s agency is leading the federal response to the ransomware attack. She said the incident shows the vulnerability not only of U.S. infrastructure, but also personal computers. Her 86-year-old mother recently suffered a ransomware attack on her iPad, Granholm said.

“So it’s just happening everywhere,” she said. “All these cybercriminals see an opportunity in the cloud and in our connectivity. And so we all have to be very vigilant. That means we’ve got to have security systems on our devices and individually we shouldn’t be clicking on any email with attachments from people you don’t know. I mean it’s just around us.”

Biden signed an executive order on cybersecurity this week, and the Energy Department and other agencies are working to protect critical infrastructure, she said.

Much of the U.S. pipeline infrastructure, like Colonial, is privately owned. The chairman of the Federal Energy Regulatory Commission, which oversees interstate pipelines, said this week that the U.S. should establish mandatory cybersecurity standards for pipelines similar to those in the electricity sector.

“We definitely have to look at it,” Granholm said May 14, adding that pipeline organizations have voluntary standards. “Even though it may be privately owned, the public uses it. So I think we have to look at that, making sure that they abide by the latest and greatest.”

John Stoody, a spokesman for the Association of Oil Pipe Lines, declined to comment on Glick’s proposal. The industry historically has opposed government mandates on cybersecurity.

Fending Off a Cyberattack

Toyota Idles All Japan Plants Due to Supplier System Outage

Fleets Can Take Steps to Reduce Risk of Cybersecurity Threats