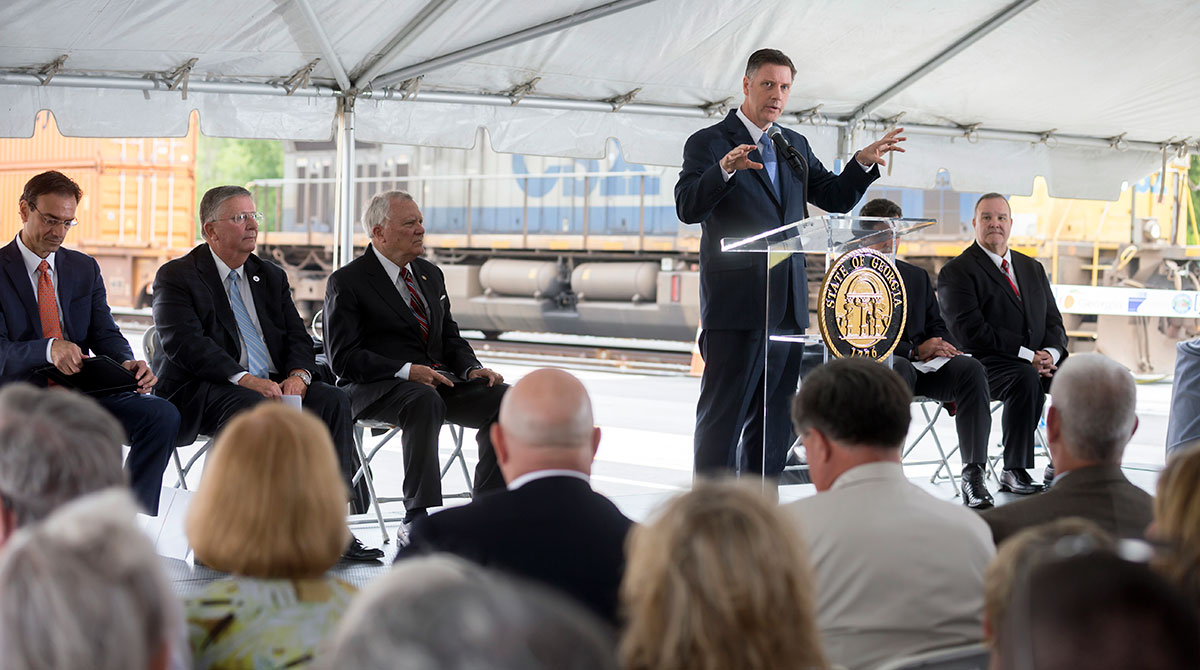 The Georgia Ports Authority celebrated the official opening of the Appalachian Regional Port in northwest Georgia on Aug. 22.

Located in Murray County, the facility will provide logistics solutions for customers in a four-state region and remove an estimated 50,000 trucks and 15 million truck miles from local highways every year, GPA officials said.

“The ARP is part of our Network Georgia initiative that brings services from the coast to communities around the state,” GPA Executive Director Griff Lynch said. “The new inland terminal will provide the same superior quality services our customers have come to rely on: congestion-free, easy access, expedited handling and reliability.”

Through intermodal rail service from CSX, the ARP offers customers across north Georgia, northeast Alabama, Tennessee and Kentucky a more efficient option to move cargo to and from Savannah’s container port.

“The Appalachian Regional Port is a powerful new gateway to the Port of Savannah that extends the efficiencies of Georgia’s superior port operations to new markets,” Deal said. “It will also serve as an economic development magnet, drawing business and industry to the southeast U.S.”

GPA board Chairman Jimmy Allgood said building additional logistics assets helps fulfill the authority’s mission. “Our job at Georgia’s ports is very simple — to build, operate and maintain the very best infrastructure and services in the maritime industry. And, the ARP will be another example of this commitment,” Allgood said. “We appreciate the governor’s support for the ARP and other projects that have helped to make our ports what they are today. Gov. Deal knows what it takes to make Georgia the No. 1 state in the nation to do business.”

The state contributed $23 million to the project with GPA providing about the same amount, Lynch said.

Handling import and export containers, CSX will provide service on a direct, 388-mile rail route to and from the Port of Savannah’s Garden City Terminal.

“CSX is proud to serve regional customers through the ARP, which will unlock new economic opportunities while lowering shipping costs,” said Dean Piacente, vice president of CSX intermodal sales and marketing. “We applaud the vision and leadership of Gov. Deal and the Georgia Ports Authority as they drive Georgia forward in ways that will benefit both businesses and consumers.”

“All but one of the 11 employees hired are local to Murray County,” Lynch said. “We hired early, and they all trained in Savannah.”

Copeland said the area offers prime locations for manufacturing and logistics development near the inland port. “Murray County features 16 sites offering more than 1,500 acres of developable land, most of which can support multiple developments,” Copeland said. “Of the 1,500 acres, 258 acres are rail-front property.”

Lynch said the first customer is Komatsu, which is scheduled for four containers in what Lynch calls, a “soft opening.”

“We are excited to have them on board,” Lynch said. “We are talking with several large customers and are sitting down with shippers and ocean carriers.”

Lynch said the goal at the ARP for the first 12 months is to handle 25,000 containers, half the port’s capacity.

“This is something that will grow as people are looking for alternate ways to move cargo,” Lynch said.

The new rail terminal will be worked by three electric rubber-tired gantry cranes. Each has a lift capacity greater than 40 tons and, working together, can handle 100,000 container lifts per year.

Murray County is a Tier 1 area, meaning special incentives are available to job creators who locate there. More direct and economical access to the second-busiest port on the East Coast will make Murray County more attractive to those involved in site selection.

“The Appalachian Regional Port is a great example of how the GPA is investing in rural Georgia, and not forgetting how that can play into the growing economic strength of the state,” Deal said.

The ARP is likely to be just the first inland port for Georgia, Lynch said.

“We think we will have an announcement about northeast Georgia by the end of the year,” he said.