Hero Gene Woolsey: 'I Just Like to Help People' 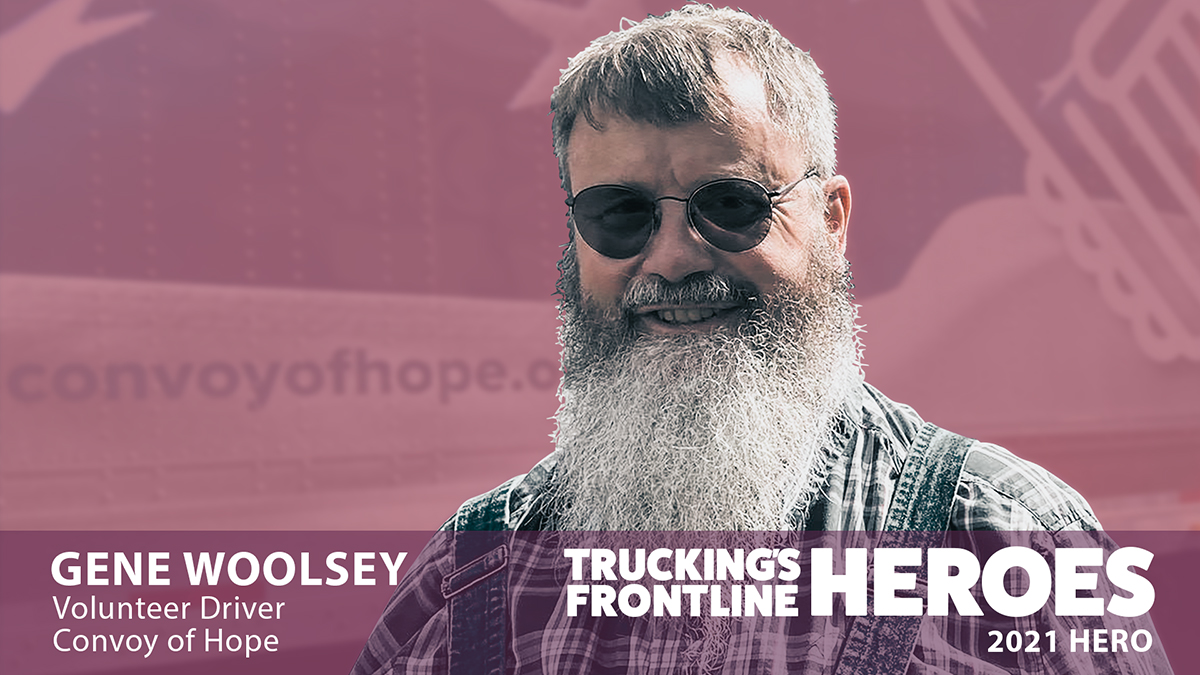 When Gene Woolsey retired five years ago, he knew his time behind the wheel was not over. But he wanted to transition from making a living to making a difference, and found his opportunity not far from his front doorstep.

A resident of the small Missouri town of Mountain View, between Poplar Bluff and Springfield, Woolsey had a long career hauling new cars coast-to-coast for Jack Cooper Transport. But it was during his time home that he became familiar with Convoy of Hope, a Springfield-based nonprofit that provides humanitarian and disaster relief including food, supplies and other services to impoverished or otherwise needy populations throughout the world. The organization specializes in disaster relief work.

“I knew they are a good outfit, but I didn’t know much of the details,” Woolsey told Transport Topics. “I had been by the warehouse in Springfield, Mo., and I wanted to see if they needed help. I didn’t need a full-time job, but they asked me if I would come to work.”

This year, that volunteer work has taken him on 13 cross-country trips, and earned him recognition as a 2021 Transport Topics Trucking's Frontline Hero.

In 2021, Woolsey traveled to Texas during February’s devastating ice storm that crippled the state’s power grid, to a church in Baltimore to help residents in need and to the Louisiana coast in the aftermath of Hurricane Ida.

As Ida was churning in the Gulf of Mexico and headed for Louisiana, Woolsey called Convoy of Hope’s dispatch office. “Send me, I’m ready to go,” he told the group’s emergency planners.

Woolsey made four one-way trips of 650 miles to Louisiana to drop off items, and then returned and headed back with more.

“I took a load of ice down there because people didn’t have freezers,” he emphasized. “I’ve hauled 30,000 live hens and tons of grain for Convoy.”

Woolsey said he was attracted to Convoy of Hope because of the organization’s four-star rating with Charity Navigator. Plus, 92% of the money and gifts it receives are used to assist people in need. Since 1994 it has provided nearly 500 million meals and helped 163 million people in need worldwide. 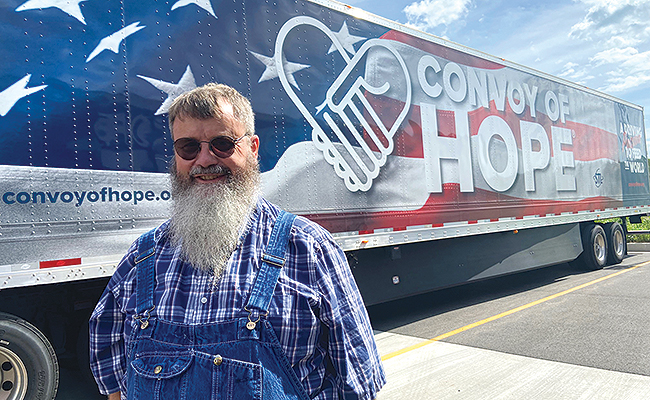 Gene Woolsey made four one-way trips of 650 miles to Louisiana to drop off items in the wake of Hurricane Ida. (Convoy of Hope)

“We haul grain, and they make package meals that go to Haiti,” he said. “We’ll take stuff into them to make the food, and in Springfield, they put it on containers and put it on the railroads and trucks, and it goes overseas and helps these little kids that need a meal.”

“It’s an unreal place to work,” he stressed. “The big food companies will call Convoy and say we have a load of food to donate, come get it, and we get in the truck and go get it and bring it back to the warehouse in Springfield. That’s the way they operate.”

Woolsey added, “Before, when I was driving and trying to make a living, you were thinking about what you were going to get paid. But now money is the last of my thoughts. You go into a driver’s meeting, and we ask, what do you need? It’s more like going to church.”

In addition to his volunteer work with Convoy, Woolsey is a long-serving deacon in his church, First Baptist, and is an on-call bus driver for the school district. The day after he spoke with TT, he carried the high school girls soccer team to a weekend match in a school bus. 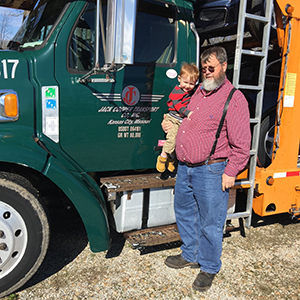 Woolsey when he worked for Jack Cooper Transport. (Courtesy of Gene Woolsey)

“I just like to help people, and I don’t know of a better way than to do this,” he said. “At Convoy, you are helping people. Here you don’t just take a load and drop it off, and it’s gone. We get to see the actual people we’re helping.

"When I took that load to Baltimore, we unloaded it and the church gave all of the items we delivered by the end of the weekend.”

Woolsey has been married to Rita, a retired human resources manager with Walmart, since 1973. Woolsey credits her with shouldering the majority of the child-rearing for their three children during his 40 years on the road. “I was on the road, and my wife ran the household,” he said. “For a long time, I was gone all week, and my wife pretty much raised the kids. You make a lot of sacrifices.”

Today, his son is in the trucking industry as a heavy equipment and diesel mechanic. One of his daughters is a nurse, and the other is in municipal government as a county clerk. The family has three grandchildren.

As a volunteer for Convoy of Hope, Woolsey said he is motivated by the face-to-face contact with people in need. He intends to keep volunteering for as long as he is able.

“People need help, and a lot of the time when I was working, I didn’t know the people needed help,” he said. “Now I know. Once you retire, that’s just the beginning of the work.”