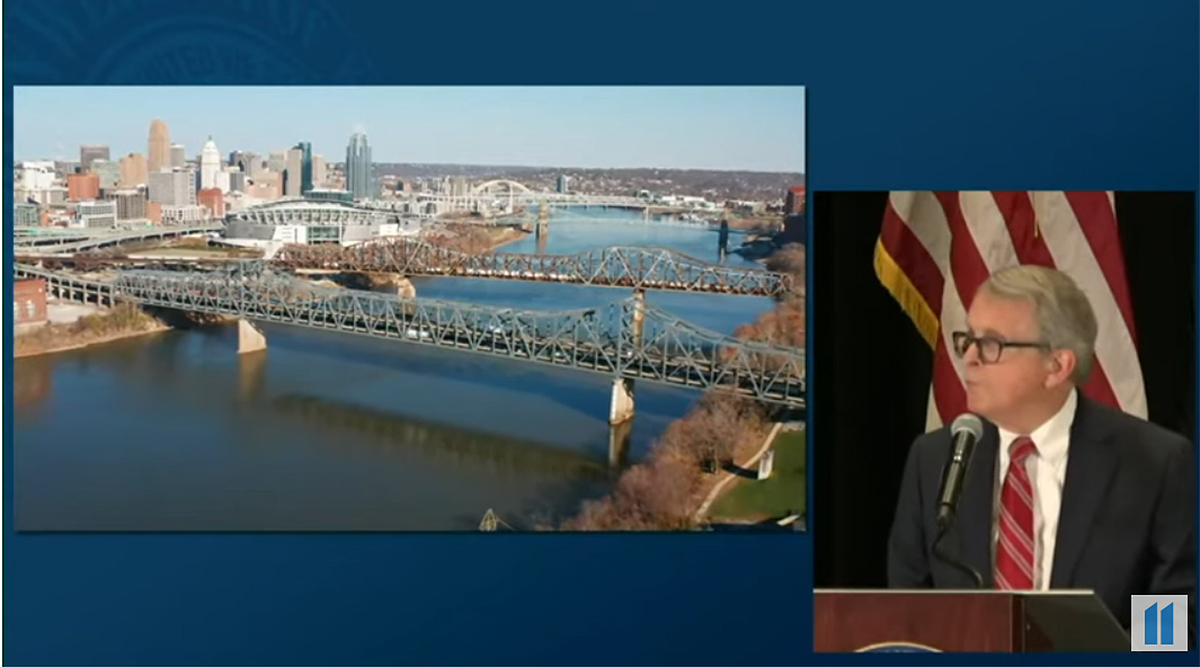 Kentucky and Ohio Govs. Andy Beshear and Mike DeWine announced their plans to jointly request up to $2 billion in federal funding for the Brent Spence Bridge Corridor Project at a press conference in Covington, Ky., on Feb. 28.

Both governors signed a memorandum of understanding confirming the states’ intention to work together on the long-discussed bridge project. Signing the memorandum allows transportation officials in both states to begin preparations for construction while also allowing the planned companion bridge to be built without tolls.

“The memorandum of understanding we will sign here shortly is the next, necessary step toward creating something that is essential for all of our futures,” Beshear said during the press conference. “Building a companion to the Brent Spence Bridge will boost safety and ease a traffic bottleneck that increasingly impacts our communities as well as this entire country, as so many goods flow across this essential corridor.”

Building a companion bridge over the Ohio River to the west of the Brent Spence Bridge would be the primary objective in the plan if the requested funds are approved. The funding is part of the bipartisan federal infrastructure bill, which includes at least $39 billion for bridge projects.

“We believe that there is no bridge in this country that is as necessary and in needing of a change,” DeWine said during the press conference.

The Brent Spence Bridge was built in 1963. It was originally constructed to carry around 80,000 vehicles a day, but the daily I-75 and I-71 traffic load has reached 160,000 vehicles in recent years. 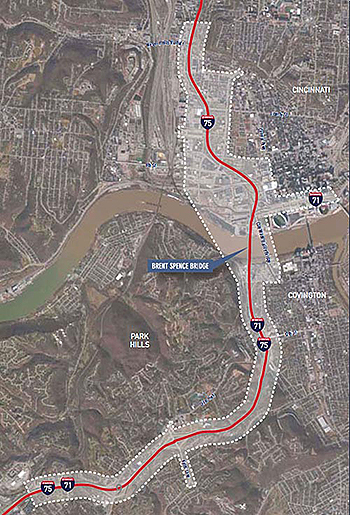 Map showing the areas of Interstates 75 and 71 from Northern Kentucky crossing north into Ohio that would be part of the project. (brentspencebridgecorridor.com)

Because I-75 is a key freight corridor stretching from Canada to Florida, the slowdowns also impact commerce throughout the eastern United States.

“The Brent Spence Bridge is a stout and sturdy structure that’s going to be carrying traffic over the Ohio River for many years to come, but it’s crying out for help,” Kentucky Transportation Cabinet Secretary Jim Gray said.

Gray said the project will be a “designed build project,” meaning the design, the engineers and the construction managers will work hand in hand, Gray said.

“That will help us to both improve quality results outcomes and improve our schedule,” Gray said. “Together they’ll be looking for opportunities to reduce the cost and footprint of the project, and to engage the community.”

Construction for the project could begin in 2024 if the requested funding is received. Kentucky and Ohio’s transportation departments have been planning the Brent Spence Bridge Corridor Project for nearly two decades, completing the critical groundwork that has made this project nearly shovel ready.

“I’m glad Kentucky and Ohio’s governors are taking this important step today to make sure this project gets done,” McConnell said in a statement read by Beshear. “I was proud to support last year’s landmark bipartisan infrastructure deal, because I know the vast positive impact it’ll have on our state and economy.”