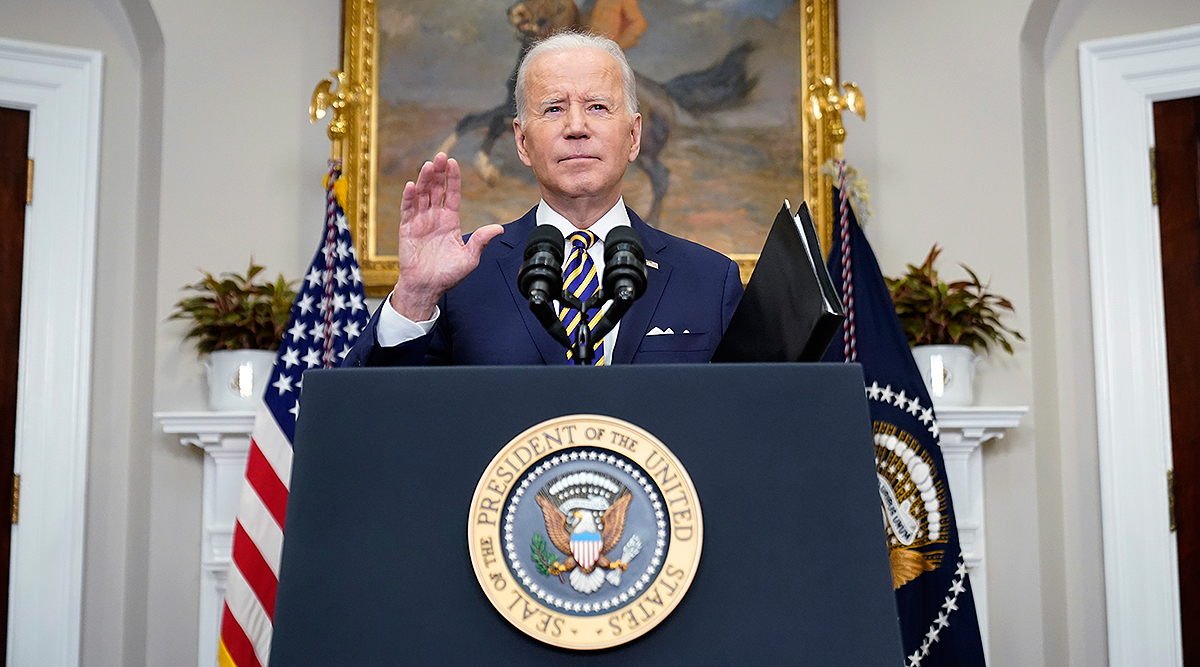 WASHINGTON — President Joe Biden announced March 8 the U.S. will ban all Russian oil imports, toughening the toll on Russia’s economy in retaliation for its invasion of Ukraine. But he acknowledged it will bring costs to Americans, particularly at the gas pump.

The action follows pleas by Ukrainian President Volodymyr Zelenskyy to U.S. and Western officials to cut off the imports, which had been a glaring omission in the massive sanctions put in place on Russia over the invasion. Energy exports have kept a steady stream of cash flowing to Russia despite otherwise severe restrictions on its financial sector.

“We will not be part of subsidizing Putin’s war,” Biden declared, calling the new action a “powerful blow” against Russia’s ability to fund the ongoing offensive.

He warned that Americans will see rising prices, saying, “Defending freedom is going to cost.”

Zelenskyy in a tweet praised Biden's action: "Thankful for US and @POTUS personal leadership in striking in the heart of Putin’s war machine and banning oil, gas and coal from US market. Encourage other countries and leaders to follow.”

Just the day before, the national average price for a gallon of diesel hit an all-time high at $4.848 a gallon following a record 74.5-cent weekly increase, while gasoline leaped 49.4 cents to $4.102 a gallon, its highest price since 2008.

Biden said the U.S. was acting in close consultation with European allies, who are more dependent on Russian energy supplies. The European Union this week will commit to phasing out its reliance on Russia for energy needs as soon as possible, but filling the void without crippling EU economies will likely take some time.

Unlike the US, which is a major oil and gas producer, Europe relies on imports for 90% of its gas and 97% of its oil products. Russia supplies 40% of Europe’s gas and a quarter of its oil. The U.S. does not import Russian natural gas.

Gas prices have been rising for weeks due to the conflict and in anticipation of potential sanctions on the Russian energy sector. Biden said it was understandable that prices were rising, but cautioned the U.S. energy industry against “excessive price increases” and exploiting consumers.

Even before the U.S. ban, many Western energy companies, including ExxonMobil and BP, moved to cut ties with Russia and limit imports. Shell, which purchased a shipment of Russian oil this weekend, apologized for the move on March 8 amid international criticism and pledged to halt further purchases of Russian energy supplies. Preliminary data from the U.S. Energy Department shows imports of Russian crude dropped to zero in the last week in February.

In 2021, the U.S. imported roughly 245 million barrels of crude oil and petroleum products from Russia — a one-year increase of 24%, according to the U.S. Energy Information Administration.

“It’s an important step to show Russia that energy is on the table,” said Max Bergmann, a former State Department official who is now a senior fellow at the Democratic-leaning Center for American Progress.

Bergmann said it wasn’t surprising that the U.S. was able to take this step before European nations, which are more dependent on Russian energy.

“All of this is being done in coordination, even if the steps are not symmetrical,” he said. “We are talking to them constantly.”