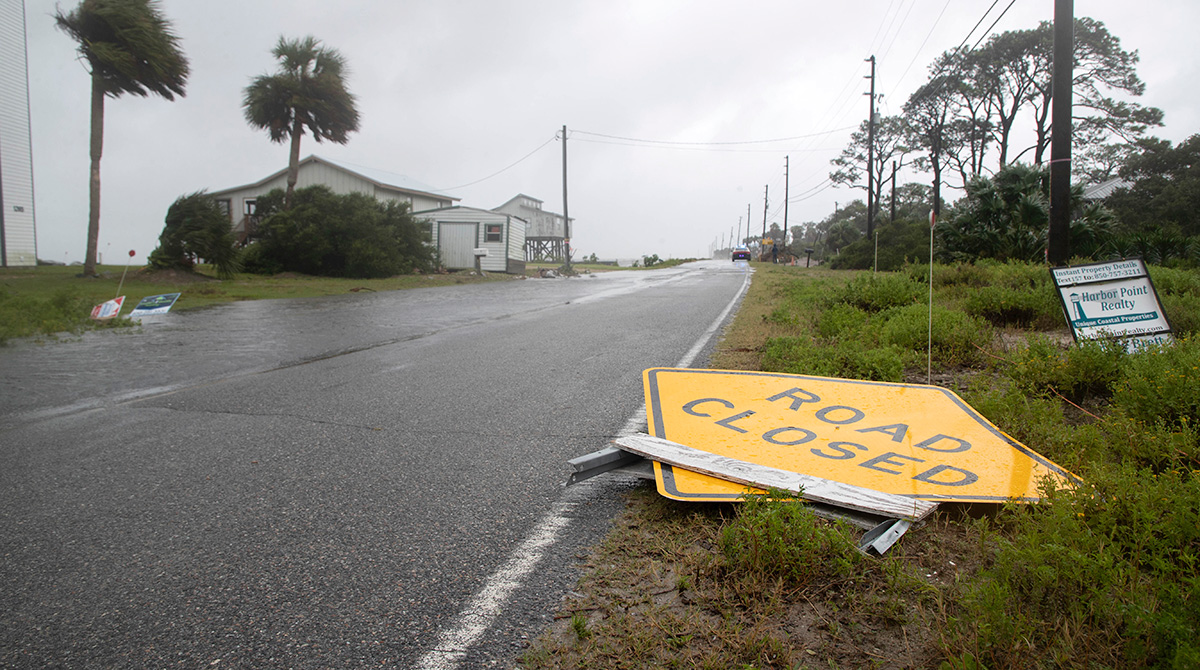 A sign is blown over on a side of Alligator Drive in Alligator Point, Fla. (Tori Lynn Schneider/Tallahassee Democrat via AP)

Tropical Depression Fred swirled over West Virginia early Aug. 18 and dumped heavy rain over the northeastern U.S., threatening to unleash mudslides and flash floods in upstate New York after closing interstate highways in the lower Appalachians. Tornado watches remained in effect for mountainous areas of Virginia and the Carolinas.

Unconfirmed tornadoes unleashed by the stormy weather already caused damage in places in Georgia and North Carolina on Aug. 17 as Fred moved north, well inland from the coastal areas that usually bear the brunt of tropical weather. One death was reported — a Las Vegas man whose car hydroplaned and flipped into a ditch near Panama City, Fla., hours after the storm moved ashore, Florida Highway Patrol said.

About 25,000 customers were without power early Aug. 18 according to the utility tracker poweroutage.us, most of them in West Virginia and North Carolina, where steady downpours swelled waterways and washed rocks and mud onto highways. Multiple landslides closed Interstate 19 through the Nantahala Gorge, according to the North Carolina transportation department.

The National Hurricane Center said Fred had top sustained winds of 25 mph and was moving northeast past Charleston, W.Va., at 20 mph the morning of Aug. 18.

Tropical Depression #Fred Advisory 35: Fred Moving Up the Appalachians and Cumberland Plateau While Slowly Transitioning Into a Non-Tropical Low. https://t.co/VqHn0uj6EM

As many as 14 possible tornadoes were reported across Georgia and the Carolinas on Aug. 17, according to the weather service. Transylvania County, N.C., declared a state of emergency after 10 inches fell, sending mud and rock onto highways, flooding roads and destroying at least one home.

Meanwhile, Tropical Storm Grace was strengthening after unleashing torrential rain on earthquake-damaged Haiti. Grace’s sustained winds grew to 65 mph early Aug. 18 as it moved between southeastern Cuba and Jamaica, and could be a hurricane before hitting Mexico’s Yucatan peninsula late Aug. 18 or early Aug. 19.

It was about 40 miles south-southeast of Grand Cayman, where a tropical storm warning was in effect, along with the Yucatan Peninsula of Mexico from north of Cancun to Campeche and from south of Punta Herrero to Puerto Costa Maya. A hurricane warning is in effect for the Yucatan from Cancun to Punta Herrero, including Cozumel.

Tropical Storm Henri, meanwhile, was about 160 miles south-southwest of Bermuda. The small tropical cyclone had 65 mph winds and was expected to circle widely around the island, the hurricane center said.