He also was chairman of the Minnesota Trucking Association. 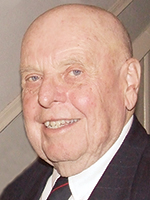 Hardman was known as a strong advocate for the use of owner-operators in trucking and led a successful lobbying effort in the 1980s and 1990s to legalize 53-foot high-cube trailers.

Dart Chairman Donald Oren spoke of Hardman’s role in shaping the company and the industry.

“He benefited everyone at Dart — indeed everyone in the truckload sector — with his talents, expertise and dedication,” Oren said.

Hardman was a transportation lawyer with his own law firm in Chicago in the 1950s when he went to work to represent Dart in seeking new operating authority from the Interstate Commerce Commission. He filed hundreds of applications which, after deregulation in 1980, Dart used to expand its truckload service nationwide.

Hardman also was instrumental in organizing a committee of shippers and carriers to lobby for changes in state laws that limited trailer length to 48 feet, an effort that ultimately succeeded with the 53-foot trailer becoming a national standard.

“This was an enormous step forward for the nation’s economy,” Oren said of the change in trailer lengths. “Shippers, consumers, the environment and the motoring public all benefit to this day through lower transportation cost, lower fuel consumption and fewer trucks on the road, helping to reduce highway congestion.”

Hardman served as president of the Transportation Lawyers Association in 1980 and moved to Minnesota to become general counsel at Dart.

While there, he became a strong advocate for the use of owner-operators.

Greg Feary, a managing partner at Scopelitis, Garvin, Light, Hanson & Feary in Indianapolis, remembers Hardman as “a staunch advocate for observing the rule of law” and a “traditionalist who fixed his eye on a goal and stayed the course.”

“He had both the bearing and tenacity of a Winston Churchill,” Feary noted. “He worked tirelessly with me and fellow lawyers at American Trucking Associations to preserve the small business model. He will be missed.”

John Hausladen was hired as CEO of Minnesota Trucking Association during Hardman’s chairmanship, in 1996.

“While Jim was an attorney by training, he really was a trucker at heart. He loved this industry and working on critical trucking issues.”

Hardman is survived by children Jimmy and Katie Maura Hardman.