Fleets Can Reduce the Risk of a Nuclear Verdict 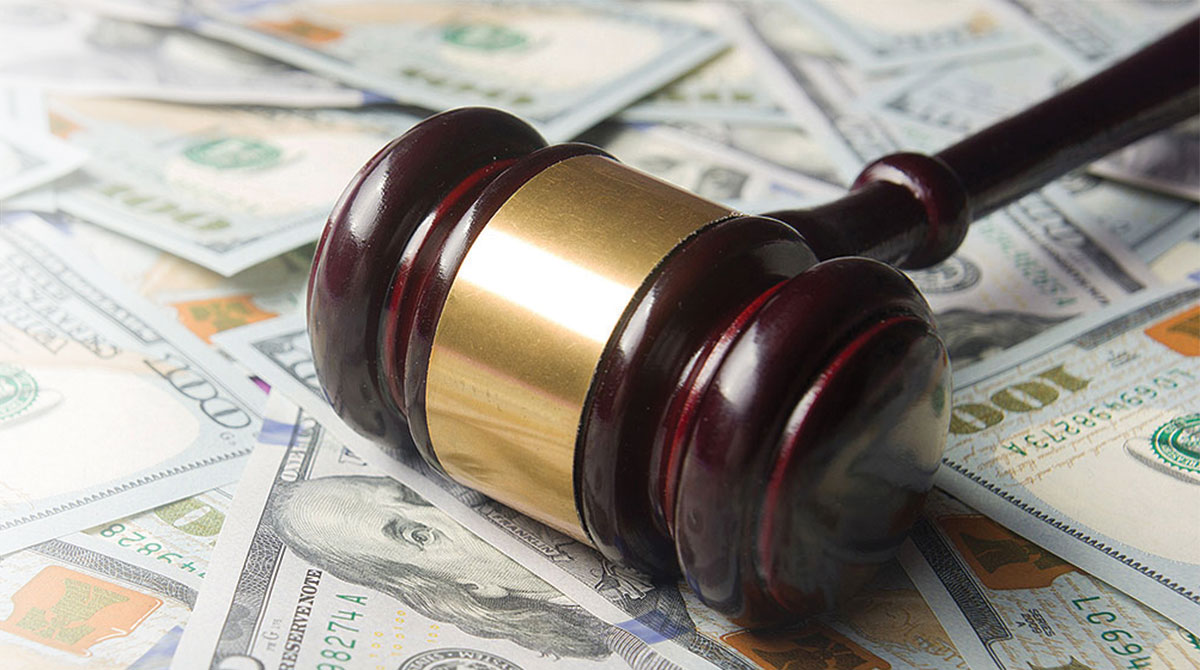 Nuclear verdicts can be detrimental to motor carriers and their insurance rates, but carriers can mitigate risk by utilizing technology, documenting and sharing safety efforts, and taking advantage of the first 24 hours if a claim occurs.

“Companies that have subscribed to a safety culture and live and breathe it have stabilized premiums and don’t have a fear of nuclear verdicts because there are very few gaps that can be exposed,” said Bryan Smith, vice president at HUB Insurance.

The largest contributing factors to nuclear verdicts typically revolve around safety statistics, a lack of hiring and training documentation, and the lack of defense, such as cameras. Record keeping and technology can take away the argument that there is a systemic failure.

The primary detonator of nuclear verdicts are systemic issues within the company rather than the specific facts of an accident, which is why documenting safety strategies is critical.

“The idea is to hit carriers with a large verdict to change their behavior,” said Doug Marcello, an attorney and chief legal officer for Bluewire, a software provider that helps fleets manage vulnerabilities. “We want to say there is a risk there, but there is an outweighing of that risk with what we can do for safety.”

Technology — including active braking systems cameras and telematics to monitor behavior — demonstrates a commitment to safety. However, technology only reduces claims and premiums if carriers take action on the information it generates, said Dan Cook, principal and practice leader at insurance broker TrueNorth.

Cook added that it is essential to remember the data exists, even if a carrier isn’t using it, and the plaintiff can get it. “If you have data that tells you that you have an unsafe driver operating in an unsafe manner and you fail to act on it, that will come out during the trial. At the same time, if you can show a history of corrective actions, you can show that as an organization you’re receiving information and using it to be safer, it gives you something to lean on in the defense,” he said.

While technology and the data it produces is valuable, it can be overwhelming. “The safety folks are drinking through a firehose when it comes to technology,” Marcello said, adding that the first step is for fleets to identify the technology they have. “Some people don’t realize what they have until after the accident.” 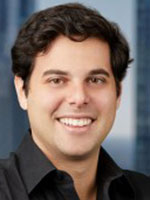 Reid Spitz, co-founder and chief product officer at High Definition Vehicle Insurance (HDVI), said data from electronic logging devices, for example, isn’t always used. “Fleets are often overwhelmed with information and don’t have the time or resources to evaluate and learn from the available information,” he said. “To be impactful, the data captured by telematics devices must be incorporated into a consistent and well-managed risk management program for fleets to see safety results.”

Fleets also need to look at where accidents arise in relation to the data and focus on behavior most indicative of accidents, Marcello said.

HDVI recommends all fleets use a learning management system, which helps coach drivers on specific behaviors and track what training or information drivers have accessed. “If a fleet is faced with litigation, they can use this information to demonstrate they have gone above and beyond to train drivers and offer them resources,” Spitz said.

Not having a complete driver file, not documenting training, not training at all and utilizing subpar training standards all increase risk of a large verdict. “It is pretty easy to have a jury look down on a trucking company if they’re not documenting training,” Smith said, adding that the same applies to companies with poor CSA (Compliance, Safety, Accountability) scores with no active plan to manage them. “If there are not guidelines, or if there are and they are not followed, that can be exposed and again painted negatively.”

If a plaintiff attorney can paint a picture that a fleet has a consistent problem of cheating their logs, not keeping well-maintained vehicles, not properly screening drivers in their hiring practices, etc., it makes it easier for them to use the reptile theory — a trial strategy that attempts to use fear and anger to win cases and accelerate the verdicts, Spitz said.

While large sums grab headlines, any verdict can be nuclear in relation to actual damages. “We’re seeing a rise in smaller verdicts — $500,000 — when the damages may have been a couple of doctor appointments that were $1,500 each,” said Jannie Steck, a partner with the Indianapolis-based trucking law firm Scopelitis, Garvin, Light, Hanson & Feary.

Safety culture is the lens through which workers and the public see how the company feels and acts on safety and is something that is demonstrated, not communicated. “You can’t just write a policy on safety and walk away,” said P. Sean Garney, co-­director of Scopelitis Transportation Consulting. 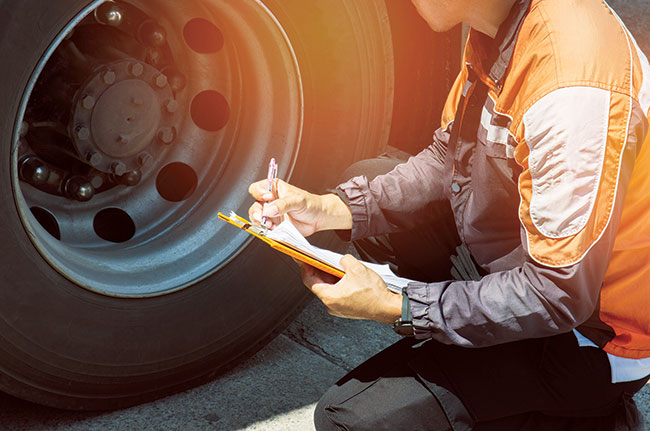 A driver checks his tires during a pre-trip inspection. (1933bk via Getty Images)

Internally, safety-focused leadership and managers empower all employees to listen to feedback and make decisions to improve safety, even if it means missing a delivery. “If you expect your drivers to take their pre-trip and DVIR [Driver-Vehicle Inspection Report] processes seriously, you need to take it seriously whenever they raise a concern about a piece of equipment they operate,” Garney said, adding that while much of the safety technology and discussion is focused on the driver, their managers, maintenance technicians and safety managers also need to be held accountable.

Setting up communication channels with drivers, such as social media groups, creates opportunities to share safety tips. “Traditionally we used to think about safety as a monthly safety meeting. Now companies are getting creative about finding ways to interact with drivers, dispatchers and everyone,” Garney said. 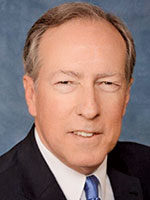 Marcello said one of the biggest challenges is fleets aren’t telling their story. “It starts with compliance in terms of what they do and how they comply with the regulations, but it goes beyond compliance,” he said.

Garney suggests fleets take advantage of opportunities to earn safety awards, which offer an opportunity to promote their overall efforts. “People often think it will take a long time to build an application for an award, but it can be a worthwhile marketing tool,” he said.

Carriers can also promote and take credit for their good work in the community. “The reptile theory case isn’t about the driver’s actions. It is targeting the big bad company. The company needs as much out in the domain as possible getting credit for their actions,” Cook said.

The Need for Speed

If a claim occurs, the first 24 hours are critical and often overlooked, which hurts motor carriers down the road. “If your insurance provider does not have the means to put boots on the ground as soon as possible, work with an independent consultant to help with statements and conduct accident reconstruction,” Smith said.

Steck said more often than not, it is worth investing in experts early on to help evaluate the case and have resources should the case go to trial. “The first thing we tell clients is if you had an accident or a claim, particularly if it is a serious injury or a fatality or you suspect there could be serious injuries, the best thing you can do is gather as much information as possible as early as possible,” she said. “Be clear-eyed early in the process to know which accidents have the potential to turn into a nuclear verdict.”

That means completing a thorough investigation, retaining experts, looking at phone records and driver files, and getting a sense of the big picture, including the weeks leading up to the event. “Look at it like the claimant’s attorney may look at it,” Steck said.

Cook said there can be reluctance among carriers to spend money on accident investigation and engage legal counsel early. “Those dollars, while they can be substantial, can put the motor carrier in a better position to mitigate the risk,” he said, adding that picking the right professional partners is critical. “If you’re a motor carrier that runs all 50 states, you should have national counsel selected so you can pick up the phone. You can’t be completely reliant on the insurance company to do that for you.”

After an initial investigation, follow-up is vital. “Have communication with a claimant where you can so you’re consistently evaluating a claim,” Steck said.

“Be aggressive and do what you can to try to defeat the jurisdiction if it is one that is adverse for you,” Marcello said. “If we have an argument on liability and our customer has damage, we’ll file first because the first to file determines the court.”

However, Steck said more and more geographies are embracing large sums. “What we are seeing across the country is verdicts are going up, and it seems like those nuclear verdict hot spots aren’t as rare anymore,” she said.

The regrettable reality of the industry is accidents are going to occur regardless of whose fault it is and lawsuits are going to arise. Thus, it’s best for fleets to stay prepared.

“We know that ahead of time. Let’s identify our vulnerabilities and address them today,” Marcello said.