Fleets Can Get Quality Equipment, Financial Flexibility With Used Trucks 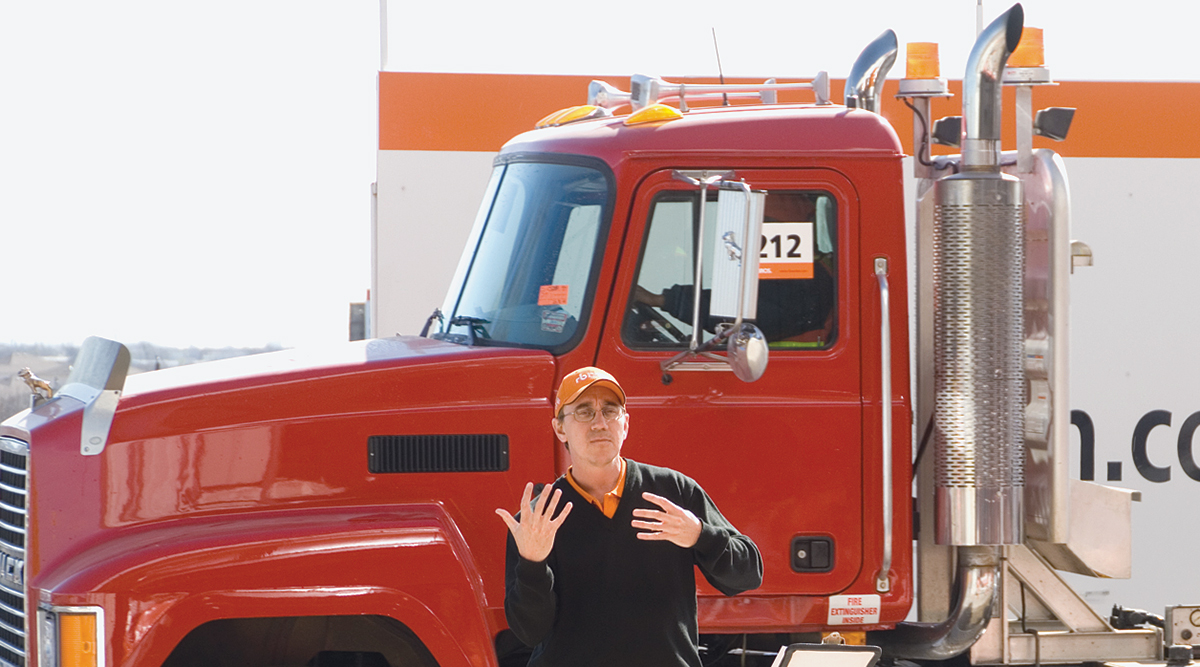 A bid catcher takes bids during an auction at Ritchie Brothers in Fort Worth, Texas. (Ritchie Bros. Auctioneers)

Motor carriers that typically purchase new trucks sometimes find themselves in situations where it is expedient to buy used trucks.

“There’s a lot of different situations where they might want to buy some used trucks,” said Gary Conleay, director of used truck sales for Peach State Freightliner, pointing to carriers aiming to establish or grow owner-operator divisions, carriers that have added business and need power units quickly, and carriers seeking to boost revenues without incurring new-truck costs.

Buying used trucks and offering them for lease is an effective way for a fleet to establish or expand its roster of owner-operators, Conleay said. A shorthaul or regional distribution operation that lands a contract and needs power units quickly also might opt to invest in used equipment. “Typically, we can get them power units on the road within 30 days,” Conleay said. Carriers that intend trucks for shorthaul use in urban settings “don’t want to have to buy a $150,000 truck to do that,” Conleay observed.

“For $150,000, they can buy three used trucks and get three times the revenue as opposed to buying a new truck,” he said. 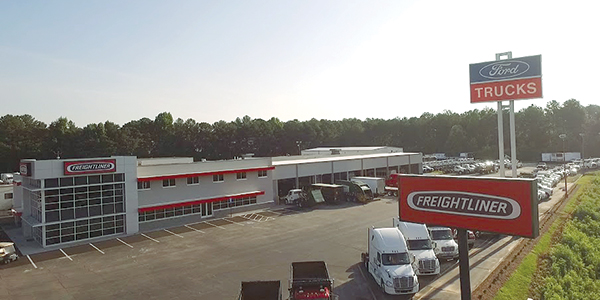 The depreciation curve is gentler on used trucks, Conleay and others who work in the market said. “Owning that truck, getting into it and then getting out of it in three years — their cost of ownership will be less,” Conleay said.

When large fleets don’t have the budget allocation to keep up with the growth that they’ve sustained, used trucks can be a cost-effective option, said Dan Piper, national sales manager for Ryder System. A carrier that picks up new routes and needs to add, say, 60 power units, might have a budget that allows for 25 new units. “That’s the main reason you see really large fleets purchasing [used] vehicles,” Piper said.

But he noted that financing is the determining factor in purchasing. “We typically ask a series of questions to identify what type of lending we can get the customer approved for,” he said.

The business of buying used trucks differs according to whether the buying is done from a fleet or leasing company, from a dealer that is associated with a new truck brand or at an auction, sellers of used trucks said.

The practice of going to a used truck lot, walking the aisles, looking for the ideal truck?

“Those days are over,” Piper said. “The world is rapidly moving from brick and mortar to click and order. We have tens of thousands of trucks at our fingertips.”

As the owner and seller of used trucks coming off lease, Ryder also has complete maintenance records, Piper said. Those records, provided by Ryder, “can be the best indicator of how that truck will perform in the future,” Piper said. 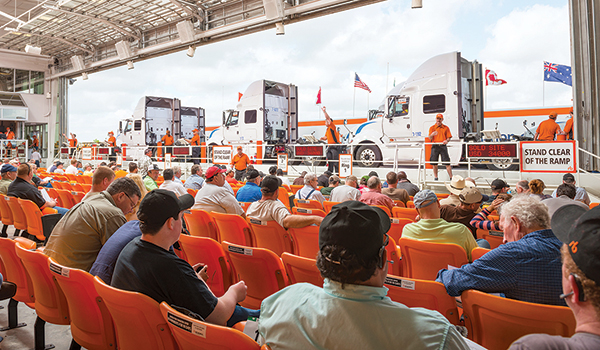 A Ritchie Brothers auction in progress in Orlando, Fla. Mike McMahon, director of strategic accounts for Ritchie Bros., said live auction sites are open 10 to 14 days before an auction begins so that potential purchasers can collect information on specific trucks. (Ritchie Bros. Auctioneers)

In the auction process generally, some potential buyers might expect limited opportunity to evaluate equipment before bidding, but Mike McMahon, director of strategic accounts for Ritchie Bros., said the auctioneer designs its live auctions to defy such expectations. Live auction sites are open 10 to 14 days before an auction begins so that potential purchasers can collect information on a specific truck or trucks, said McMahon, who specializes in transportation equipment.

“Our yards are open for people to come in to look at and inspect that equipment,” he said.

Some customers send their technicians or retain techs to examine the trucks before the event.

“They can’t drive it around the yard, but they can start it, maybe move it a little bit in place,” McMahon said.

Online, typically between 30 and 80 images of a truck, its specs and mileage are available. “There’s a lot of good information out there for our potential buyers to be able to look at online,” McMahon said.

Ian Malinski, Ritchie Bros. media relations manager, offered tips on bidding at live auctions: “Bid early and bid often. Don’t wait too long. If you wait too long, you’re not going to get it.”

Generally, a truck that is out on the interstate, going from here to California and back, can get a lot of miles on it very quickly, but it can be in better shape with 600,000 miles on it than a log truck is with 150,000 miles on it.

“Generally, a truck that is out on the interstate, going from here to California and back, can get a lot of miles on it very quickly, but it can be in better shape with 600,000 miles on it than a log truck is with 150,000 miles on it,” he said.

McMahon offered some pointers for buyers, including fundamental-yet-critical questions they should ask sellers: “Do you have the title?” “Is the title in your name?” And, “Is the owner’s manual in the truck?”

Consider whether the configuration of a used truck or trucks will fit “what the potential buyer intends to use the truck for,” paying specific attention to the gear ratio, McMahon said.

If dashboard warning lights come on, that may or may not be an issue. “Sometimes that’s as easy as clearing some codes, but sometimes there could be an issue with the engine or the aftertreatment system,” he said.

The marketers said prospective buyers should verify that lights function properly and that brakes and tires are in acceptable condition.

“Most of the trucks that we sell have either some new truck warranty remaining, or they’ve probably just gone out of warranty, since most warranties are around 500,000 miles,” Conleay said. SelecTrucks has access to warranty records for Freightliner and Western Star products, which can be printed and provided, he said.

“We don’t have access to [fleet] maintenance records,” Conleay noted, “but that’s not a big deal, because any significant repairs would have been performed by the dealer, under warranty, and we would have access to those records.”

“When a truck has 400,000 or 500,000 miles, you really need to know that the emissions system is serviced and operating correctly,” Conleay said.

There is a simple way to find out.

“Reach into the exhaust pipe and feel it, and pull your hand back and see if it’s got a lot of smut on it. If there’s a lot of smut [from] a late-model truck, that truck’s not running correctly. It should be clean as a whistle.” He cautioned, “You want to do this when the exhaust is cold, not when it’s hot.” 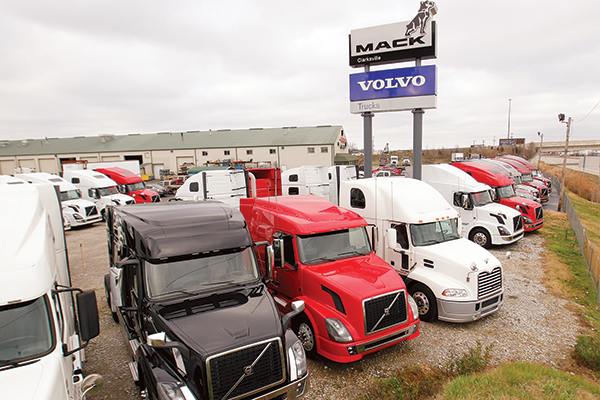 Olen Hunter of PacLease advised that buyers should not judge a truck strictly by its odometer. Ask for an engine ECM download. Hunter said it can help a buyer understand whether the miles on the ECM are consistent with the odometer reading.

“That ECM record will also show engine hours,” Hunter said. “That’s often overlooked. You can’t look at the miles or kilometers on the odometer to tell how much life is left in a truck.”

A low-mileage tractor might have been running in a pumping application with a power takeoff. “It sat there and idled at a high frequency,” Hunter said. “That puts wear on the engine.”

Promptly after purchase, have a DOT inspection done, McMahon advised. Ritchie Bros. operates “refurb facilities” — sites where purchasers can have their trucks refurbished — including cleaning, painting and minor body work.

For owners looking ahead to collecting maximum value when selling, the critical thing to do is to follow OEM guidelines, whether they are in the owner’s manual or online, McMahon and others said.

Spec’ing the truck for the long haul is equally important, so that its value holds, Hunter of PacLease said. The company specs its vehicles to make them useful to a variety of operational types, he said, spec’ing disc brakes on the front for stopping distance and for lower maintenance, and generally, in a 6 × 4 tractor application spec’ing a 40,000-pound rear axle.

“It’s not the lightest weight, and it’s not a heavy-duty axle,” Hunter noted. “It’s an optimal spec for a rental truck and what is going to be most suited for the secondary market.”