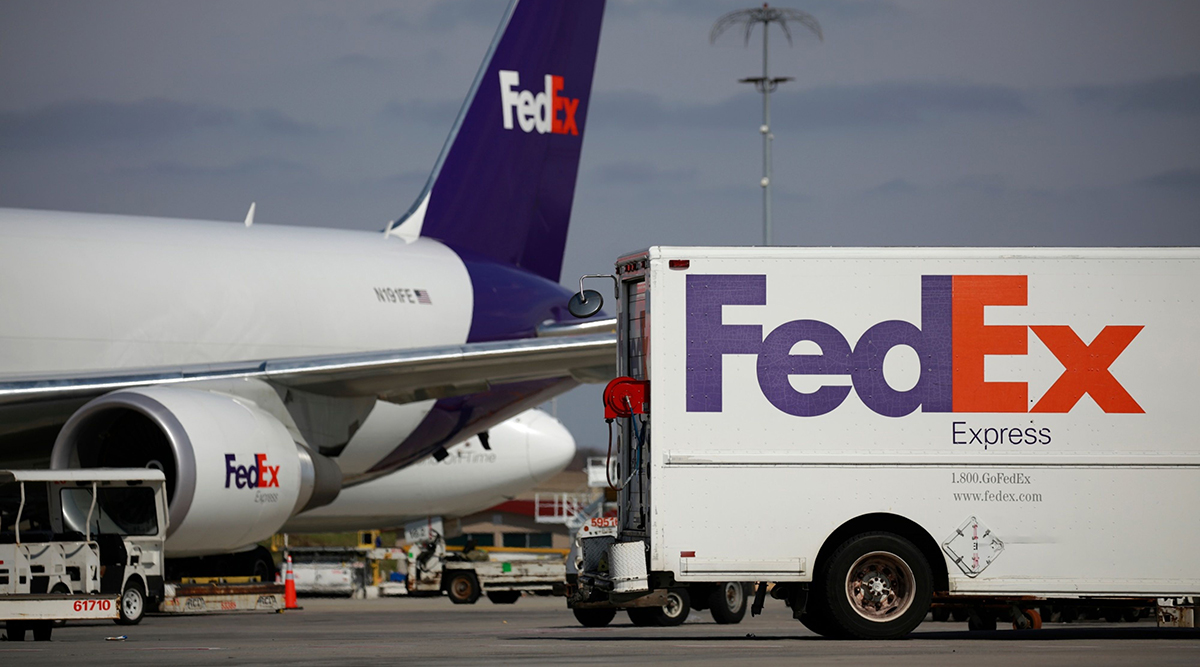 A FedEx delivery truck parked near a cargo jet at the FedEx Express Hub in Memphis. (Luke Sharrett/Bloomberg News)

Analysts surveyed by Refinitiv were expecting $6.86 in earnings per share on $24.56 billion of revenue.

FedEx operates on a fiscal year cycle that closed on May 31.

As part of its earnings presentation, FedEx said it expects an adjusted earnings for this fiscal year of between $22.50 and $24.50 a share, which is higher at the range’s midpoint than analysts’ predictions.

“Our foundational investments have set the stage for a strong fiscal 2023,” CEO Raj Subramaniam said. “As we move forward, our focus will be on revenue quality and lowering our cost to serve.”

According to one analyst, the company’s higher-than-expected outlook when it comes to its profit forecast is good news for its new CEO, who has been in the top job for less than a month, taking over on June 1 from legendary CEO and company founder Fred Smith, who remains with the company as its chairman.

“FedEx has long been outpaced by its parcel rival UPS in terms of creating profits for investors. The new CEO is expected to make strides towards operating the Ground and Express segments as a more cohesive network, which should create incremental profit gains,” Third Bridge Senior Analyst Patrick Donnelly told Transport Topics.

On June 29 Subramaniam will address investors at the company’s Memphis, Tenn., headquarters when he discusses FedEx’s short- and long-term strategy at its annual investors conference.

In his first weeks on the job Subramaniam has announced FedEx will increase its dividend by 53% and the company will slow capital spending. He gave investor D.E. Shaw, a FedEx shareholder with less than a 1% stake in the company, a say in the appointment of a new member of the company’s board. FedEx earlier this month announced the appointment of two new directors — Amy Lane, a former Merrill Lynch executive, and ex-Union Pacific COO Jim Vena. Their addition brings the board’s strength to 14 directors, 12 of whom are independent.

The company said its quarterly profit was helped by an easing of the labor shortage, which improved its overall operations as more sorting hubs were fully staffed. During the quarter it improved its delivery time to 93% from 89% in December, according to ShipMatrix, which collects data on the parcel industry.

In the other segment revenue, FedEx reported a 24% quarterly increase to $1.13 billion from $915 million. For the full year revenue increased to $4.68 billion from $3.52 billion.