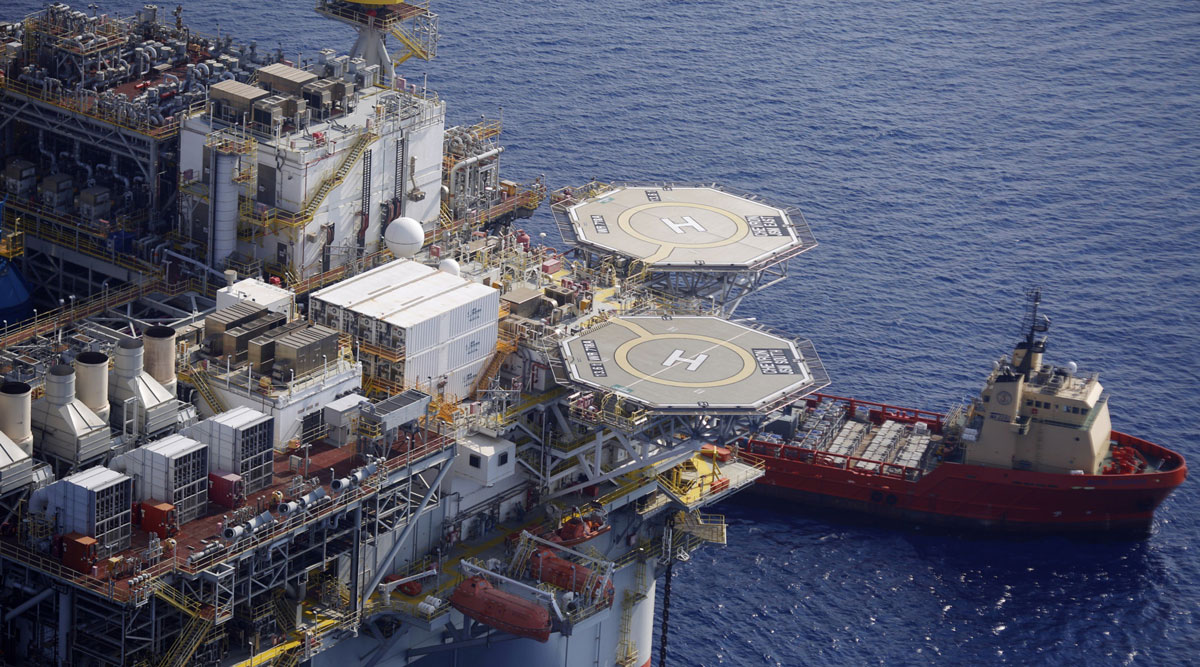 A platform supply vessel sits anchored next to a deepwater oil platform in the Gulf of Mexico. (Luke Sharrett/Bloomberg News)

Oil fell again as a fresh coronavirus outbreak in China, and increases in cases elsewhere, spurred concerns that a second wave of the virus will derail a nascent economic recovery.

Futures declined to near $35 a barrel in New York, sinking in tandem with equity markets, after falling 8.3% last week. Beijing closed the city’s largest fruit and vegetable supply center following a surge of cases, stirring fears of a resurgence just as the world’s largest oil user was showing signs of improving demand.

“Fear has started sprouting again,” said Bjornar Tonhaugen, head of oil markets at consultant Rystad Energy A/S in Oslo. “Concerns that we may be seeing the beginning of a second wave of the pandemic are dominating trading floors.” 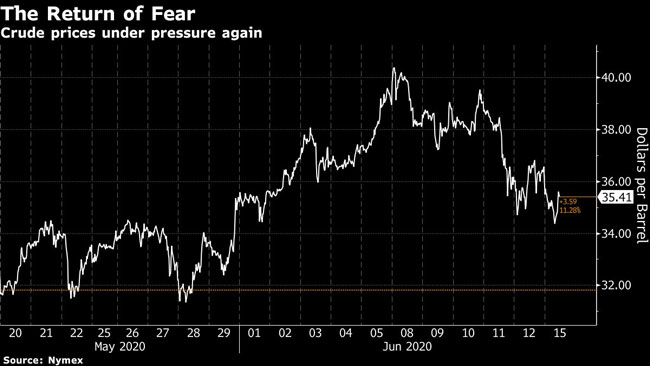 Crude’s six-week rally fizzled on June 12 amid concerns the worst of the virus isn’t yet over and as the U.S. Federal Reserve warned the pandemic could inflict lasting damage on the American economy. BP Plc’s announcement on Monday that it will write down the value of the business by the most in a decade reinforced the picture of an industry in turmoil.

West Texas Intermediate crude for July settlement fell 3.2% to $35.11 a barrel on the New York Mercantile Exchange as of 8:29 a.m. local time. It has lost more than 11% since closing at a three-month high on June 10. Brent for August delivery declined 2% to $37.96 a barrel on the ICE Futures Europe exchange after dropping 8.4% last week.

Still, there are signs that the physical oil market is tightening.

OPEC and its allies have agreed to maintain production cutbacks amounting to about 10% of global supply into next month, and will hold committee meetings on June 17 and 18 to assess their impact.

Saudi Arabia will deliver between 10% and 40% less crude than requested to seven refiners in Asia in July, according to refinery officials who asked not to be identified. Iraq, which has typically lagged in implementing its agreed cuts, instructed BP to reduce output by 10% at the country’s biggest oilfield.

Activity at America’s vast deposits, including shale, continues to slow, with drilling rigs falling to a 13th week to the lowest in more than a decade, data from Baker Hughes showed on June 12.

On the demand side, Chinese official figures showed refinery runs in Asia’s largest economy rose last month on a year-on-year basis. Refineries processed 13.69 million barrels a day in May, according to Bloomberg calculations based on figures from the nation’s statistics bureau. That was 7.5% higher than in April and 8.2% more than a year earlier.