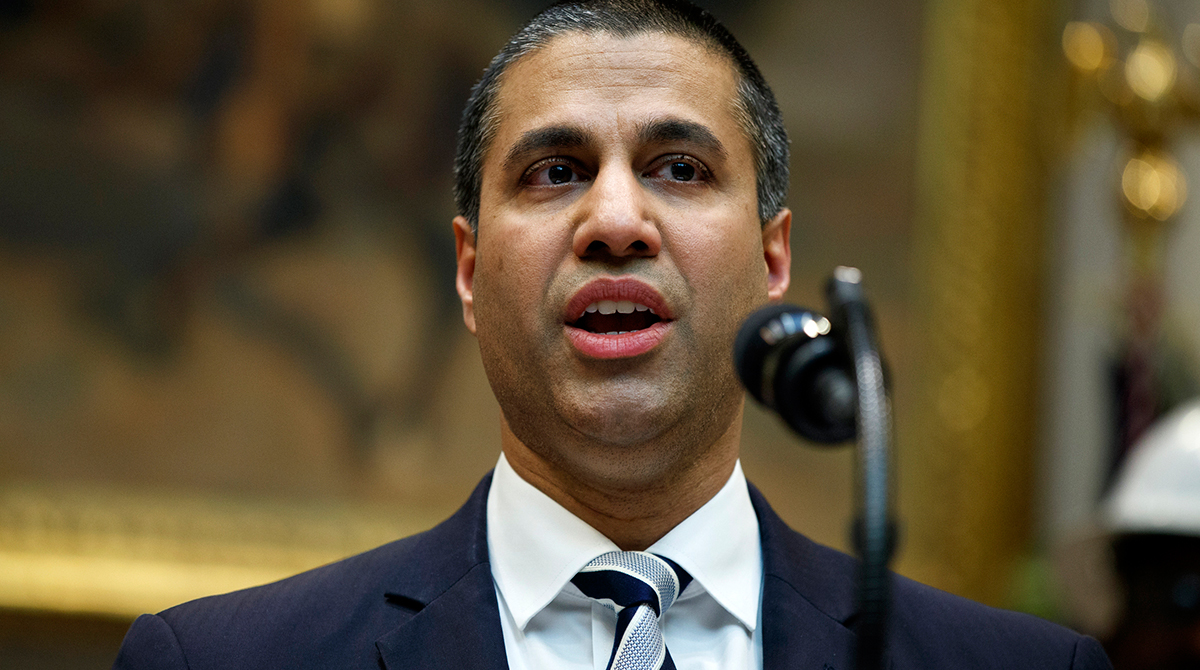 In 1999, the FCC set aside 75 MHz of spectrum in the 5.9 GHz band for applications intended to improve highway safety and efficiency, placing it under the umbrella of the U.S. Department of Transportation’s then-emerging intelligent transportation systems program.

“After 20 years of seeing these prime airwaves go largely unused, the time has come for the FCC to take a fresh look at the 5.9 GHz band,” Pai said. “DSRC has evolved slowly. It’s not widely deployed. And in the meantime, a wave of new transportation communication technologies has emerged.”

Pai wants to make available the lower 45 MHz of the band for unlicensed uses like Wi-Fi and allocate the upper 20 MHz for a new automotive communications technology, Cellular Vehicle to Everything, or C-V2X.

“I’m also proposing that we seek public input on whether to allocate the remaining 10 MHz in the band to C-V2X or DSRC,” Pai said.

He said the commission will vote Dec. 12 on whether to move forward with a notice of proposed rulemaking along the chairman’s path.

In a statement opposing any change in DSRC, American Trucking Associations, said: “With more than 36,000 people in 2018 losing their lives in traffic fatalities, it is inconceivable and unacceptable that the FCC would consider slashing available transportation safety spectrum; which could have the greatest impact in reducing traffic fatalities moving forward. We urge the commissioners not to move forward with this proposal and to prioritize transportation safety over faster Wi-Fi.”

Connected vehicle technologies are on the cusp of dramatically reducing roadway fatalities. It is vitally important that the entire 5.9 GHz spectrum remains dedicated to safety -- V2V and V2I communication. These critical channels should not be diverted for other uses like WiFi. https://t.co/o3AepGrwL9 — American Trucking (@TRUCKINGdotORG) November 20, 2019

Meanwhile, the standards-based development of performance requirements and data elements for V2X wrapped up in 2016 — and DOT hailed it as the first time that a stable set of standards were available for the entire V2X ecosystem. DOT said as of June, 54 projects are deployed, with dozens more preparing to launch. It opposed Pai’s proposal.

Cable providers who offer Wi-Fi for customers’ wireless use are hungry for spectrum as digital technology transforms everything from cars to video feeds and household appliances, according to Bloomberg News.

In April, Toyota Motor Co. announced it would suspend activities to put DSRC technology in its cars and trucks, citing lack of progress at other automakers, according to reports. But the company remained supportive of the technology as the only proven means and available technology for collision avoidance communication.

Testing to see if the band could be shared by different services, like Wi-Fi, has been underway for the past few years, but only one of three scheduled tests is complete, and it was done in the laboratory.

In our second episode of RoadSigns Season 5, we ask: How Can Fleets Navigate The Path Ahead For Data Analytics and ELDs? Hear a snippet, above, and get the full program by going to RoadSigns.TTNews.com.

A second test of channel sharing has begun, DOT said, on a closed course in Maryland using Wi-Fi devices equipped with technologies designed to share the 5.9 spectrum with V2X communications.

The FCC is “prepared to trade safer roads for more connectivity,” said ITS America President CEO Shailen Bhatt. ITS America is a public-private advocacy group that worked with DOT to secure the dedicated spectrum.

“Any re-allocation to C-V2X should be phased and in conjunction with the availability of fully functional radios that support existing services now running on DSRC,” Bishop told Transport Topics. “Where is the market and technology analysis that convinces [Pai] now is the right time to make such a drastic shift?”

Bishop said ATA’s Technology & Maintenance Council has a study group on automated and electric trucks that “is working to educate and inform fleet users regarding new connected automated system products.”

Peloton Technology is in the process of commercializing truck platooning using DSRC to exchange safety-related information between the trucks operating in tight formation. “Nearly $1 billion of industry and taxpayer dollars have been invested in developing and deploying robust V2X safety solutions that rely on solid access to the 5.9 GHz band,” Peloton said.