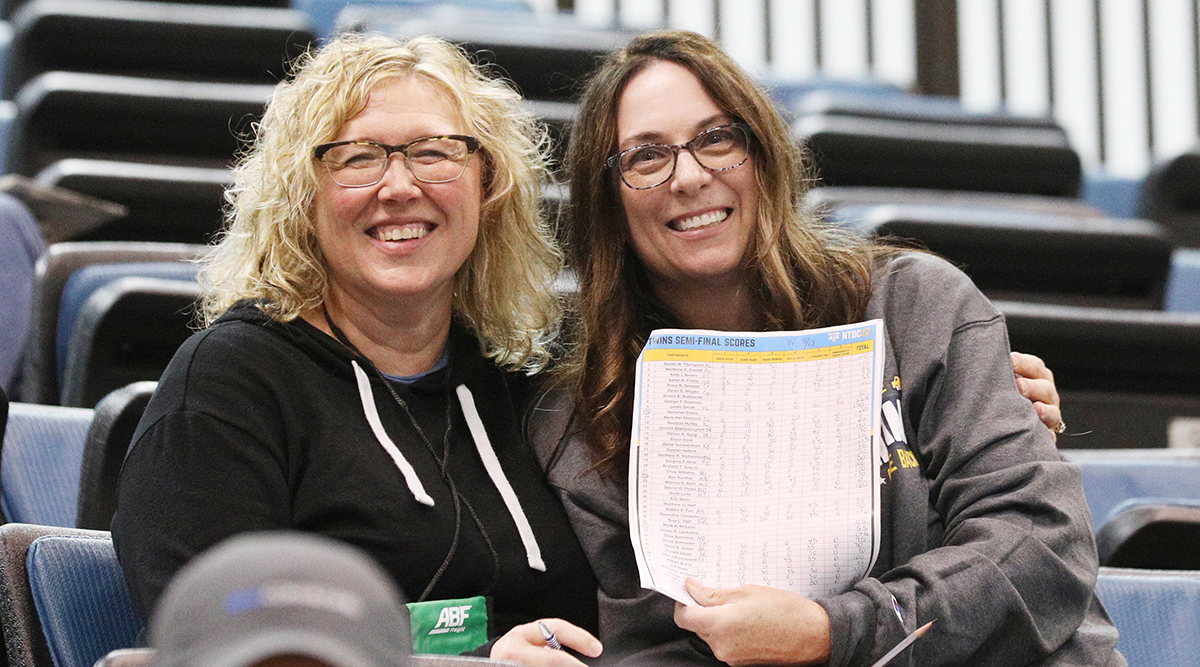 Trina Quaal (left) and Jacki Harren from Minnesota cheer on their respective husbands, Bruce of ABF Freight and Jesse of Yellow, at NTDC Aug. 18. (John Sommers II for Transport Topics)

INDIANAPOLIS — To qualify for the National Truck Driving & Step Van Driving Championships, drivers spend much of their careers perfecting their safety skills. Doing so requires discipline and often encouragement from a reliable support system.

Friends, colleagues and the families of the more than 400 competitors at this week’s premier safety tournament filled the stands at the Indiana Convention Center to root for the professional driver they’ve supported over the years.

For Jacki Harren of Minnesota, wife of Jesse Harren, a driver with Yellow competing in the tanker class, NTDC has simply been “the thrill of a lifetime, truly.”

After nearly two decades of coming up just short in qualifying for national competition, Jesse finally achieved his goal and made his NTDC debut this week.

“He’s just a respected leader and for him to be here, it was just his year,” Jacki Harren said of her husband’s achievement.

The bright lights and loud sounds of the NTDC arena sparked overwhelming joy for Harren, as well as others in the crowd. About 2,000 attendees are expected at this NTDC.

She went on, “It’s just a real honor to be here. I’m so proud of him. I know that that word is probably overused, but I can’t think of a better word. I’m just happy for him. I think he deserves this.”

The spirit of competition did not escape Harren, who acknowledged drivers at NTDC toiled for years to showcase their aptitude and talents. Still, the simple act of participating at NTDC felt like an accomplishment.

“To see him here, and however he did, whatever score he got, it’s immaterial,” Harren said. “I mean, I know that it’s a big deal, but for him to just actually get here at all, he’s already a winner. He’s my champion.” 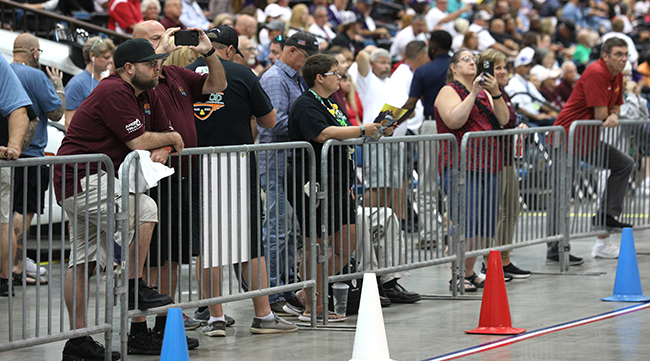 Some "railbirds" prefer to get as close to the action as possible, while other NTDC fans settle into seats to prepare for hours of cheering on competitors. (John Sommers II for Transport Topics)

Trina Quaal echoed much of Harren’s viewpoints. Her husband, Bruce, with ABF Freight, drove the 4-axle during the tournament’s second day of driving. The Quaals also arrived at the tournament from Minnesota. Bruce has competed in past nationals.

“He’s very humble,” Quaal observed. “And when he comes here, he sees friends. He sees family. He’s cheering everybody else. He’s very humble. Does an amazing job. Never wants to brag about himself.

“I’m proud to say that my husband is a truck driver. During COVID, they kept, literally, the country going.”

When her husband and the other drivers are recognized on the final day of competition Aug. 19, she said “it’s something that makes you smile.”

Decked out in a wizard’s hat that a magician made for him as part of NTDC’s festivities was Sebastien Boucher, who along with sister Allison and mother Jennifer, were among the fans cheering drivers Aug. 17. Their favorite is Fabien Boucher, the family’s patriarch, representing The Boeing Co. from the state of Washington in the 5-axle. This week marked Fabien’s debut at the national tournament. 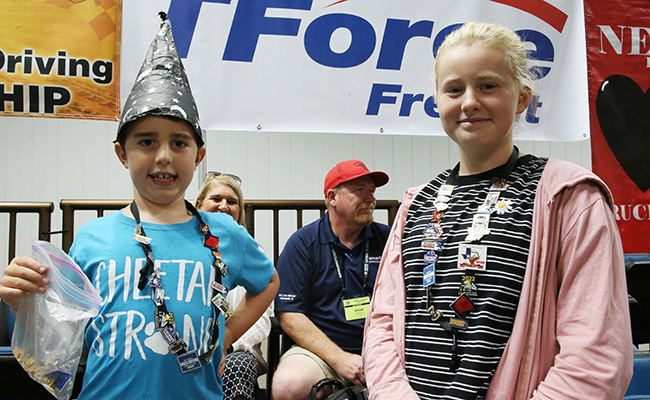 “It’s so cool watching because they’re such big trucks,” noted Allison Boucher. “It’s really cool that he made it to the nationals.”

Sebastien said when he learned his father had qualified to compete at NTDC, he was incredulous. “When I heard, I was like, ‘No! He’s joking.’

“I feel like really proud of him, and it feels really good to know like he made it,” Sebastien added. To put a fine point on it, Jennifer Fabien emphasized, “They’re very proud of him.”