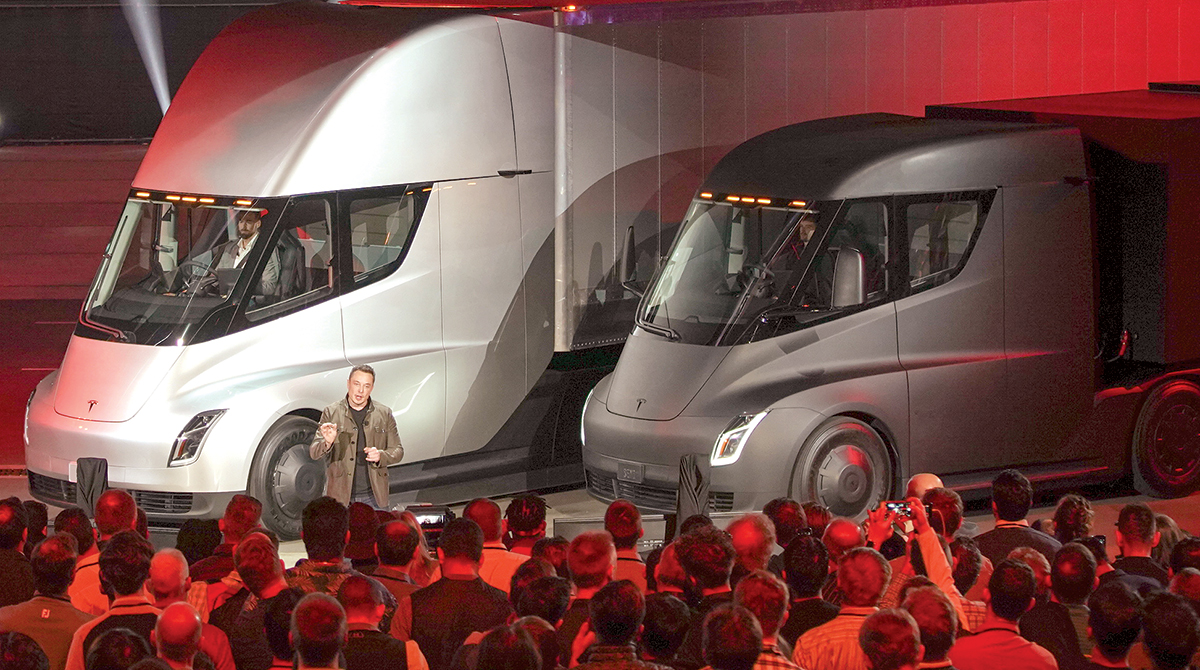 Tesla's Elon Musk speaks to the crowd after the unveiling of the all-electric Class 8 tractor. (Tesla)

The next battleground for replacing fossil fuel-guzzling vehicles will be U.S. interstate highways, where longhaul trucks keep the economy moving.

Electric trucks are coming, and they’ll be cleaner and cheaper to operate than conventional models that burn diesel, according to Tesla Inc., which already has prototypes on the road. Diesel advocates say range and recharging will be bigger hurdles for massive 18-wheelers than they have been for cars, and it will be several years before battery-powered models are ready for the open road.

The shift comes amid a growing debate over U.S. vehicle emission standards. President Donald Trump is seeking to roll back limits, while California and other states are challenging the plan in the court.

The transition will have a significant impact on commerce and the environment. Trucks are the lifeblood of the U.S. economy, handling 71% of the food, retail goods, construction supplies and other freight delivered every day. They also are a significant source of air pollution. U.S. greenhouse gases from medium- and heavy-duty trucks increased 85% from 1990 to 2016, according to the Environmental Protection Agency, accounting for about 23% of carbon emissions from transportation in 2016.

While electric trucks will curb pollution, it’s not clear the industry is ready to switch, Mills said. For starters, longhaul truckers would need a place to recharge during cross-country trips. Plus, batteries are heavy, and adding weight cuts into the cargo truckers are paid to haul.

Cummins supplies engines for vehicles including consumer pickups, fire engines, tractors and heavy-duty trucks. Most burn diesel and the Columbus, Ind.-based company has some that use natural gas. It also is developing electric motors, but Mills doesn’t expect much demand for them in big trucks anytime soon.

Diesel will be “the primary option for heavy-duty trucking markets, longhaul especially, for a decade or more,” Mills said in an interview.

Tesla expects it sooner. The top electric car maker unveiled the Semi in November, a Class 8 truck that can haul a maximum vehicle weight of 80,000 pounds, the standard size for longhaul shipping. It will go about 500 miles (805 kilometers) on a charge, with a base price of $180,000. A cheaper version will go 300 miles. The company expects to deliver production models next year and said Walmart Inc. and PepsiCo Inc. are among customers that have placed orders.

Tesla CEO Elon Musk said during the November introduction that the Semi costs about $1.26 per mile to operate, compared with $1.51 a mile for diesel models. The company declined to answer additional questions about the Semi.

“It’s easy if you’re just coming into this market to say, ‘They’re $1.50 per mile and we can do it for $1.20,’ said Allen Schaeffer, executive director at the Diesel Technology Forum trade group. “But where’s the proof? I haven’t seen it.”

Diesel trucks are entrenched in the shipping industry, and there’s little need for a new entrant, Schaeffer said. The industry has made significant advances in reducing pollution. According to EPA estimates, emissions from current engines are about 85% lower than before 2007, when new standards took effect.

There are other issues that concern truckers. A 500-mile range is fine for shorter delivery routes but diesel trucks typically go much farther before refueling, sometimes more than 2,000 miles. Also, some drivers get paid by the mile and wouldn’t make money while batteries recharge.

Tesla said it is planning a high-speed truck Megacharger that, in about 30 minutes, would give a battery enough juice to go 400 miles. The company hasn’t said when it would be available. 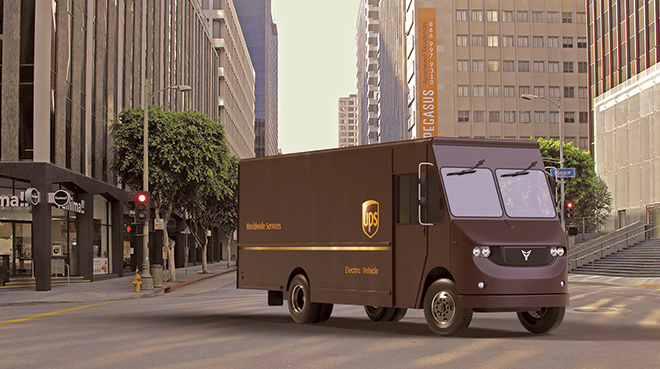 A rendering of the UPS fully electric class 6 delivery truck. UPS will collaborate with Thor Trucks, Inc. to develop and test the truck. (UPS)

Thor announced a Class 8 in December. CEO Dakota Semler said already has orders, though he wouldn’t identify the customers. The ET-One is designed for customers with shorter delivery needs. It will have a top range of 300 miles and a base price of $150,000. The company said the battery can fully recharge in 90 minutes.

“If you’re able to produce a vehicle that would save fleets money, there’s really no reason why you’re not able to adopt more of them,” Semler said in an interview.

Electric trucks are slowly gaining momentum, said Don Ake, vice president of commercial vehicles at FTR Transportation Intelligence. They’ll enter the market next year, and he said they would be a more competitive option in about five years.

“There’s going to be a competitive battle at some point,” Ake said. “Diesel isn’t going down without a fight.”