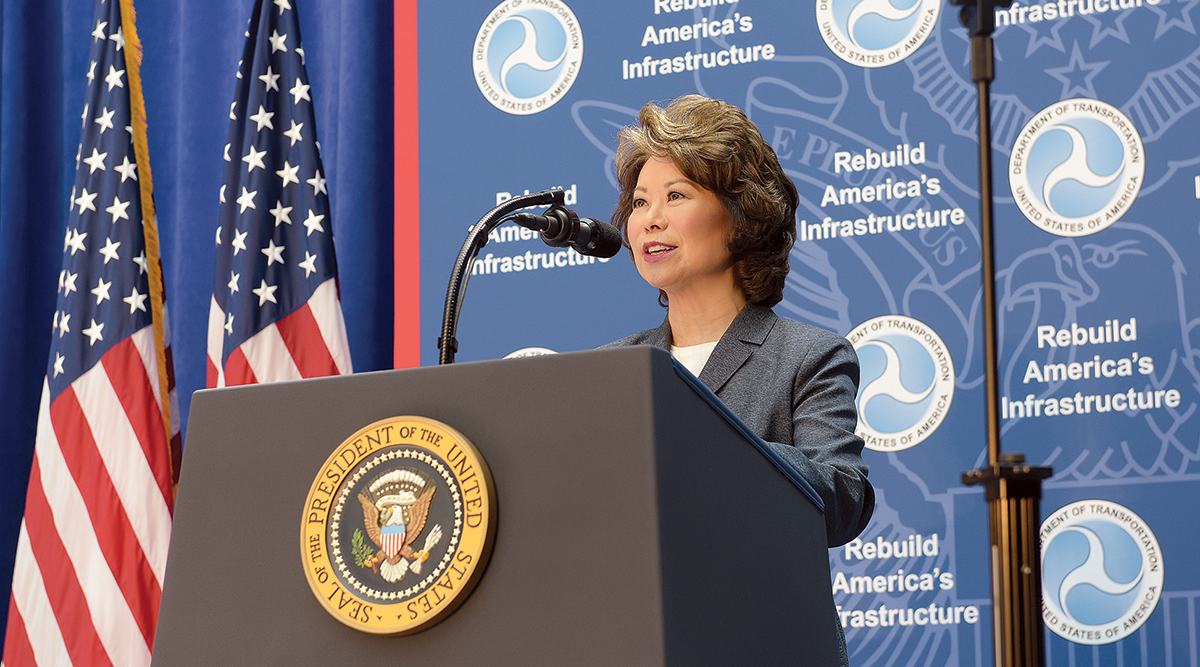 Transportation Secretary Elaine Chao at an Infrastructure Week event in 2017. She cited the partnerships the agency has built as her proudest accomplishment as DOT leader. (U.S. Department of Transportation)

After a year when the federal government confronted the challenges of the coronavirus while also developing frameworks to help guide transportation toward a future that promises to be reshaped by automated technology, Transportation Secretary Elaine Chao credited stakeholders for helping regulators propel the industry forward.

Chao in an exclusive Dec. 3 interview with Transport Topics cited the partnerships the agency has forged as her proudest accomplishment as DOT leader — a tenure that stretches back to 2017 and the beginning of the Trump administration. She cited everyone from shipping groups and technology experts to state and local government officials, all of whom offer wisdom and experience grounded in their respective fields.

“We understand that they know what they’re doing and the government is not this all-knowing command and control entity,” Chao said. Recently, she said partnerships with shipping entities, airline companies and government agencies have helped facilitate a plan for COVID-19 vaccines’ transport, taking into consideration the dry ice and lithium batteries needed for safe storage during movement.

“We want to be a problem-solver,” Chao said.

That also was true when the Federal Motor Carrier Safety Administration on her watch reviewed about 8,000 public comments in consideration of that agency’s eventual updates to hours-of-service regulations. Chao and former FMCSA acting Administrator Jim Mullen announced the new rules, which granted increased flexibility to truckers, May 14.

To help the nation combat the coronavirus, FMCSA earlier this year issued relief for certain HOS regulations so that truckers could get needed supplies to hospitals, grocery stores and consumers.

In the coming years, automated vehicle technology will be a frontier of possibility for the transportation sector, Chao said. She noted that DOT must manage the dual responsibilities of building the transportation system of the future while addressing legitimate public concerns regarding safety, security and privacy.

I also say to the innovators [of automated vehicle technology] that they need to share their enthusiasm with the rest of the country, because there are people who are hesitant, anxious [and] afraid of this new technology.

In June, DOT launched the Automated Vehicle Transparency and Engagement for Safe Testing Initiative to increase transparency and inform the public about automated vehicle technologies. Chao said AV TEST serves as a way to increase public awareness of automated vehicle testing, acknowledging that some people are reluctant about such technology, perhaps harboring fear that it may displace them from their jobs.

“I also say to the innovators that they need to share their enthusiasm with the rest of the country, because there are people who are hesitant, anxious [and] afraid of this new technology,” Chao said. “Consumer acceptance will be the constraint to growth.”

Engagement with transportation technology experts and members of the public has been a focus during Chao’s tenure. 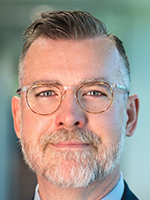 “With the [AV TEST] initiative itself, [my] baseline, initial thought is, ‘Yes, more please,’” Luke Stedke, managing director of communications and policy at DriveOhio, told TT. DriveOhio, which is supported by the Ohio Department of Transportation, ensures that state regulations and policies accommodate the development of infrastructure and technology needed for smart mobility.

“The ability to establish relationships at the state, federal and industry level has been invaluable,” he said.

In addition to increasing awareness surrounding automated vehicle technology, Chao has placed an emphasis on rural communities. The agency has split distribution of federal resources evenly between urban and rural areas through discretionary grant programs. Since January 2017, DOT has distributed nearly $300 billion in funding, including more than $49.3 billion through 7,933 discretionary grant awards.

The North Dakota Department of Transportation, for one, was awarded a $22 million Better Utilizing Investments to Leverage Development program grant to raise the grades of flood-susceptible roadways at 13 locations throughout the state. These rural roads are important for freight movement and, when closed, can force truckers to use routes that aren’t designed for heavy trucks. According to NDDOT spokesman David Finley, the department wouldn’t have been able to move forward with these projects without the grant.

“The federal funds will help MDOT officials continue with the plaza project as the department remains committed to improving the flow of people and goods at this important border crossing,” MDOT spokesman Jeff Cranson said.

Chao said investments in rural areas are much needed, noting rural America experiences a disproportionately high rate of traffic accidents and fatalities. She said more than 36,000 bridges in rural areas have fallen into poor condition. Some 90% of load-posted bridges are in rural areas, which is troublesome for the heavy trucks that have to take detours to avoid them.

In July, DOT unveiled an online toolkit to help those interested in participating in the Rural Opportunities to Use Transportation for Economic Success program. The resource, which Chao described as a way to level the playing field for interested groups, illustrates applicant requirements and sorts grant programs by applicant type and eligible project activities.

“I come from rural America, and I know that rural America does not want a handout,” Chao said. “They just want equity in the distribution of federal resources. It’s an issue of equity, as well as safety.”