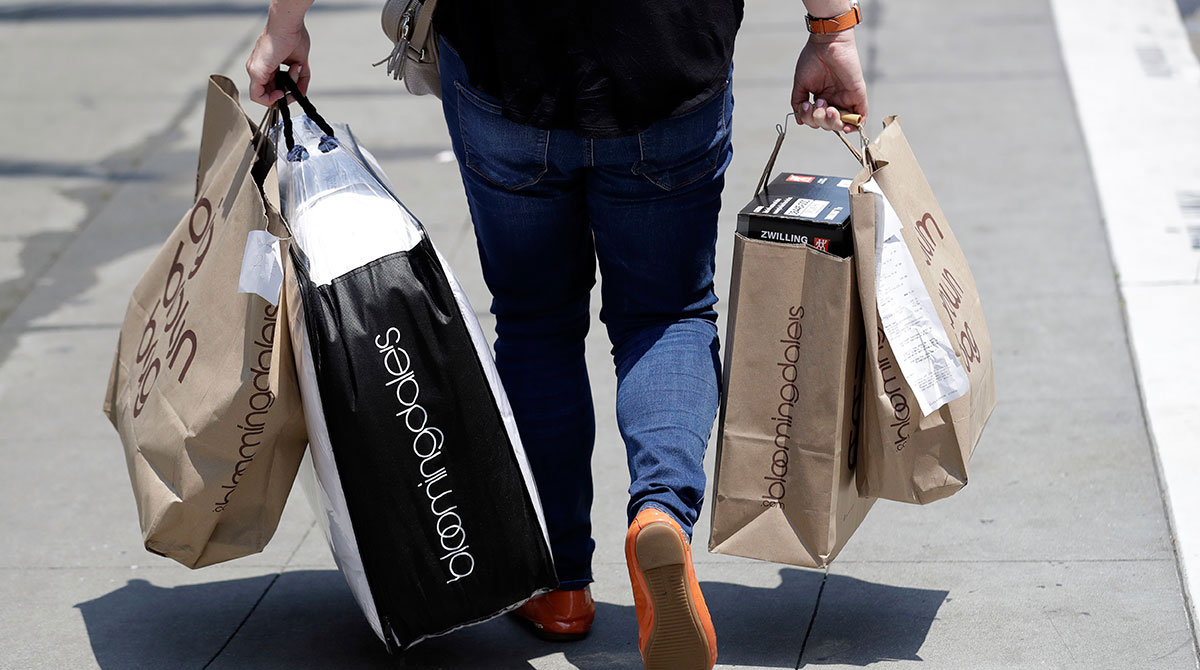 WASHINGTON — The U.S. economy shrank in the first three months of the year even though consumers and businesses kept spending at a solid pace, the government reported May 26 in a slight downgrade of its previous estimate for the January-March quarter.

Last quarter’s drop in the U.S. gross domestic product — the broadest gauge of economic output — does not likely signal the start of a recession. The contraction was caused, in part, by a wider trade gap: The nation spent more on imports than other countries did on U.S. exports. The trade gap slashed first-quarter GDP by 3.2 percentage points.

And a slower restocking of goods in stores and warehouses, which had built up their inventories in the previous quarter for the 2021 holiday shopping season, knocked nearly 1.1 percentage points off the January-March GDP.

Analysts say the economy has likely resumed growing in the current April-June quarter.

The Commerce Department estimated that the economy contracted at a 1.5% annual pace from January through March, a slight downward revision from its first estimate of 1.4%, which it issued last month. It was the first drop in GDP since the second quarter of 2020 — in the depths of the COVID-19 recession — and followed a robust 6.9% expansion in the final three months of 2021.

The nation remains stuck in the painful grip of high inflation, which has caused particularly severe hardships for lower-income households, many of them people of color. Though many U.S. workers have been receiving sizable pay raises, their wages in most cases haven’t kept pace with inflation. In April, consumer prices jumped 8.3% from a year earlier, just below the fastest such rise in four decades, set one month earlier.

High inflation is also posing a political threat to President Joe Biden and Democrats in Congress as midterm elections draw near. A poll this month by the Associated Press-NORC Center for Public Research found that Biden’s approval rating has reached the lowest point of his presidency — just 39% of adults approve of his performance — with inflation a frequently cited contributing factor.

Still, by most measures, the economy as a whole remains healthy, though likely weakening. Consumer spending — the heart of the economy — is still solid: It grew at a 3.1% annual pace from January through March. Business investment in equipment, software and other items that are intended to improve productivity rose at a healthy 6.8% annual rate last quarter.

And a strong job market is giving people the money and confidence to spend. Employers have added more than 400,000 jobs for 12 straight months, and the unemployment rate is near a half-century low. Businesses are advertising so many jobs that there are now roughly two openings, on average, for every unemployed American.

The economy is widely believed to have resumed its growth in the current quarter: In a survey released this month, 34 economists told the Federal Reserve Bank of Philadelphia that they expect GDP to grow at a 2.3% annual pace from April through June and 2.5% for all of 2022. Still, their forecast marked a sharp drop from the 4.2% growth estimate for the current quarter in the Philadelphia Fed’s previous survey in February.

Considerable uncertainties, though, are clouding the outlook for the U.S. and global economies. Russia’s war against Ukraine has disrupted trade in energy, grains and other commodities and driven fuel and food prices dramatically higher. China’s COVID-19 crackdown has also slowed growth in the world’s second-biggest economy and worsened global supply chain bottlenecks. The Federal Reserve has begun aggressively raising interest rates to fight the fastest inflation the United States has suffered since the early 1980s.

The Fed is banking on its ability to engineer a so-called soft landing: raising borrowing rates enough to slow growth and cool inflation without causing a recession. Many economists, though, are skeptical that the central bank can pull it off. More than half the economists surveyed by the National Association for Business Economics foresee at least a 25% probability that the U.S. economy will sink into recession within a year.

“While we still expect the Fed to steer the economy toward a soft landing, downside risks to the economy and the probability of a recession are increasing,” economists Lydia Boussour and Kathy Bostjancic of Oxford Economics cautioned May 26 in a research note.

“A more aggressive pace of Fed rate hikes, a tightening in financial conditions, the ongoing war in Ukraine and China’s zero-COVID strategy increase the risk of a hard landing in 2023,” they added.

In the meantime, higher borrowing rates appear to be slowing at least one crucial sector of the economy — the housing market. Last month, sales of both existing homes and new homes showed signs of faltering, worsened by sharply higher home prices and a shrunken supply of properties for sale.

What We Know About the Economy in 2021