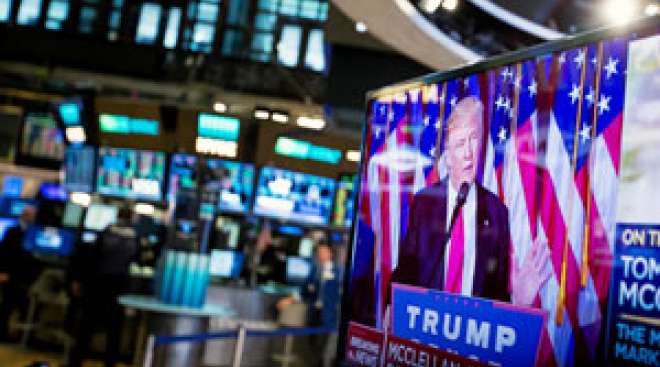 The 30-stock gauge climbed 1.4% to 18,589.69 on  Nov. 9, briefly surpassing its Aug. 15 high before paring the advance in the final 30 minutes, while futures traded in a 1,172-point range, going from down 867 points to 305 points up. Caterpillar Inc. and Pfizer Inc. led the rally, rising more than 7% as investors assessed a Donald Trump presidency.

While first-day moves after Election Day are notoriously unreliable, equity markets were all green Nov. 9, aided by timely hedges and the first blush of optimism over Trump’s economic program. The gains flew in the face of dire warnings from Wall Street strategists of a sell-off after a Republican victory.

“People focus on the fact that his acceptance speech kind of changed the direction of the market,” said Krishna Memani, New York-based chief investment officer at Oppenheimer Funds Inc., which oversees $223 billion. “It was far more conciliatory and far more fiscal-focused than these acceptances typically are. That made a world of difference.”

The market came around quickly just a week after enduring a nine-day sell-off that was the longest since 1980. Futures went from the brink of triggering Chicago Mercantile Exchange limit-down trading curbs around midnight as votes were being tallied to extending the biggest three-day advance since June.

“Our base case is we’re more likely to see a more moderate president than we saw as a candidate, and the market’s agreeing with that,” said Lowell Yura, head of multiasset solutions for BMO Global Asset Management in Chicago, which oversees $238 billion.

European markets warmed to what had seemed like a long-shot candidate. The Stoxx Europe 600 Index erased a slump of as much as 2.4% to end 1.5% higher in the biggest reversal since European Central Bank President Mario Draghi said in March he didn’t anticipate further rate cuts.

“If fiscal spending comes up front and generates growth, ultimately that’s good for Europe,” said John Haynes, head of research at Investec Wealth & Investment in London. His firm, which oversees 27.8 billion pounds ($34.5 billion). “There’s no reason to think Trump is anti-Europe rather than pro-America, and the recovery in Europe should stay on track, everything else being equal.”

Even so, one day’s gain doesn’t make a rally and uncertainty over the newcomer politician is likely to linger, particularly for investors who crave clarity, said David Schiegoleit, a senior portfolio manager based in Newport Beach, California, for U.S. Bank’s Private Client Reserve. If he demonstrates more of a “pragmatic tone,” like his victory speech, it will go over well.