Projects Would Be Aimed at Reducing Congestion 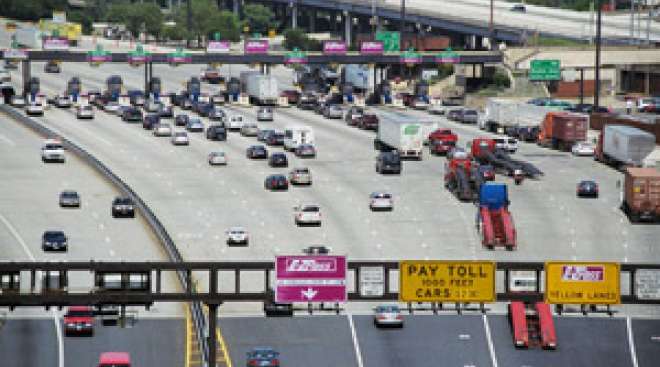 The U.S. Department of Transportation issued grants to five metropolitan areas that will require or promote greater use of tolls to decrease congestion.

“These direct user fees have the advantage of both reducing the enormous costs of congestion, and also of raising funds more effectively than the gas tax does to help states and cities build and maintain critical transportation infrastructure,” she said in a statement.

In addition to New York City’s congestion-fee plan, in which DOT will give the city $354 million, DOT also said it would give:

Miami, $63 million: Florida will immediately begin converting underused high-occupancy vehicle toll planes into an all-electronic high-occupancy toll highway, the Miami Herald reported. Planners speculated the lanes — dubbed “Lexus lanes” by some, because wealthier drivers would be better able to afford them — could cost 30 cents a mile, or up to $6 to make an express trip from Miami to Ft. Lauderdale.

Minneapolis, $133 million: The city’s Finance Department said Minneapolis has spent $2.5 million related to the recent bridge collapse and expects to spend another $7.5 million to handle traffic problems around the site, the Minneapolis Star-Tribune reported.

San Francisco, $159 million: Drivers approaching the Golden Gate Bridge would have to pay an extra toll of about $2. Revenue would help pay for an $810 million project to replace the 70-year-old Doyle Drive approach road, the San Francisco Chronicle reported.

Seattle, $139 million: The DOT grant requires a new toll on the Evergreen Point Bridge to help reduce congestion, the Seattle Post-Intelligencer reported. The tolling would not begin until September 2008 and must be debated in the state legislature, the paper said.