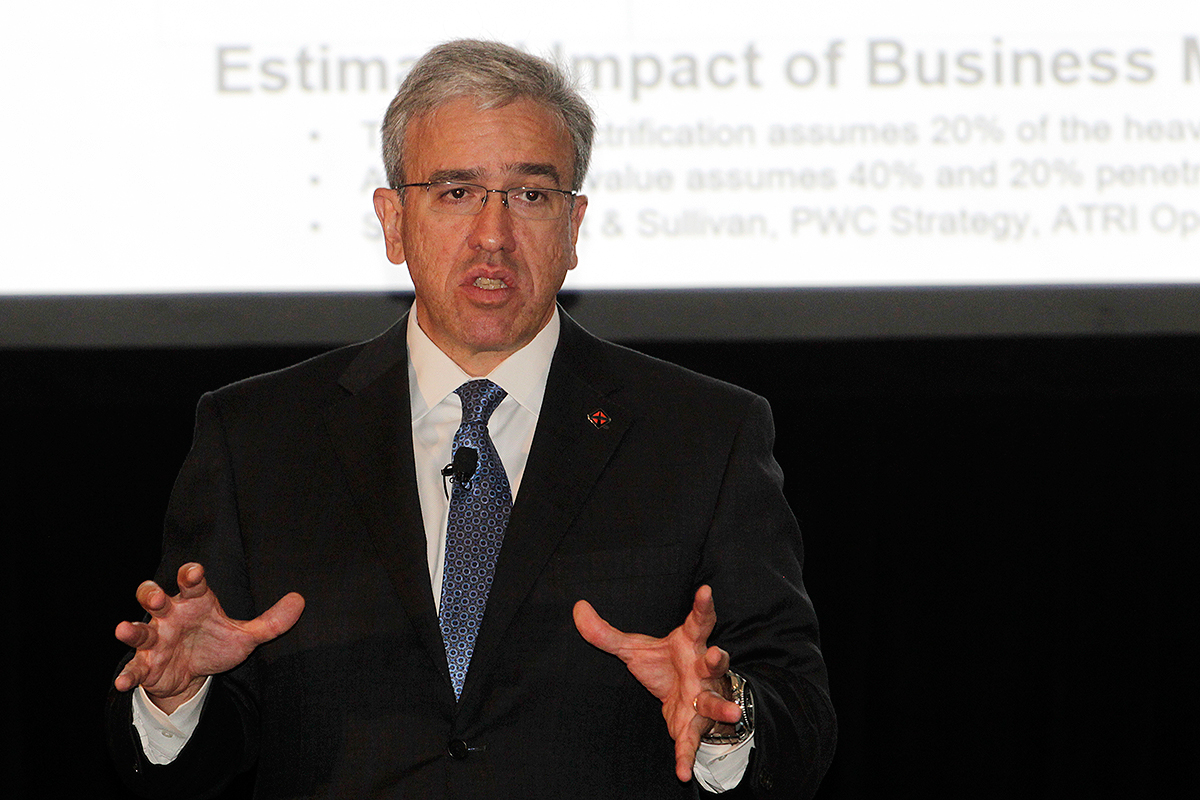 ATLANTA — Disruptions of supply chain operations are coming and will shake up the trucking industry from fleets to suppliers, an executive with one truck maker said, adding it was time for the industry to get “paranoid.”

“The industry will really look different, and we better all be prepared for that because there is change coming,” said Persio Lisboa, chief operating officer at Navistar International Corp.

Lisboa made the comments while delivering the keynote address at the annual Heavy Duty Manufacturers Association Breakfast and Briefing, which was part of the inaugural North American Commercial Vehicle Show here Sept. 27.

Driving that disruptive change is the need to keep up with customers’ expectations of instant information and order delivery — or close to it, he said, adding those factors are reshaping the supply chain. Plus, there’s the need to reduce unplanned down time, increase driver safety and maximize asset utilization.

To help with that, the industry has the emerging power of big data — built on connectivity — behind it, and that can improve supply chain operations and fleet performance, Lisboa said.

Lisboa told the story of how, using “cluster methodology,” Navistar was able to gather data through its connected vehicle services application from participating carriers clustered in a geographic region. Navistar analyzed the information and compared the performance of the similarly operating carriers.

One carrier in the group stood out as operating about three times less efficiently, he said. Navistar contacted that carrier and ultimately learned the carrier was using a spec that had been part of the way it operated for a long time, but it was causing the fuel efficiency of its trucks to fall.

The company pointed that out to the carrier, and they changed the spec and improved its fuel efficiency.

Meanwhile, connected vehicles will be the “backbone” of the digital supply chain, he said. Yet, about 70% of the trucks on the road don’t have telematics devices.

“How do we reach them?” he asked. “That is a major opportunity for disruption” and for digital load-matching companies “to jump into our sector.”

Navistar monitors about 350,000 trucks using its OnCommand Connection and stores 8.8 million miles of data each day, and can identify where and when 1.3 million gallons of fuel are consumed in those trucks, Lisboa said.

As it turns out, Friday is the day with the highest fuel consumption, according to Navistar data.

In addition, the federal government needs to pass regulations encouraging the use of automated trucks to make the roads safer. “We will see dedicated vehicles operating ramp-to-ramp,” he said.

“Call it disruption, but in the end it is just productivity — it is just taking waste out of the system,” Lisboa said.

The question is who is going to be in the forefront of the coming changes, he said.

Christmas at Risk as Supply Chain ‘Disaster’ Only Gets Worse