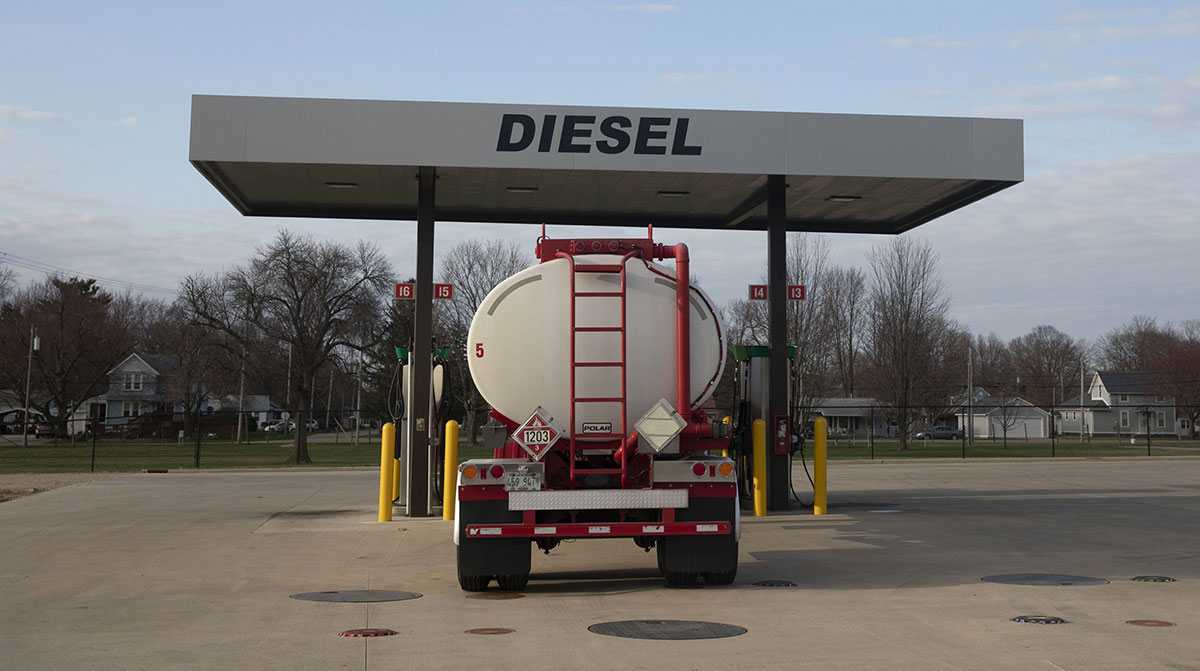 Diesel's cost dropped by at least 11 cents in four of the 10 regions surveyed by EIA. (Daniel Acker/Bloomberg News)

EIA showed that the price of diesel declined in all 10 regions it surveys. That includes an 11-cent drop in four regions. The Lower Atlantic saw the biggest decline at 11.8 cents to $5.479 a gallon. The Rocky Mountain region had the smallest at 5.8 cents to $5.674.

“Even with oil getting beat up, diesel prices were pretty strong,” Phil Flynn, senior energy analyst at The Price Futures Group, told Transport Topics. “They continue to be really because of the concerns about what’s going on in Europe. And obviously the concern surrounds gas supply in Europe and whether Russia is going to cut off supplies.”

Flynn pointed out diesel prices are still struggling to come back down, even with oil prices dropping, due to concerns of recession.

“We think that trend is going to continue,” Flynn said. “We don’t think there’s going to be a lot more downside on diesel. We think that the oil correction is going to level off here a little bit. But diesel prices could settle in this area. We might get into the $5.50s as a national average. But I don’t look for us to sell off too much in the near-term, especially as we get closer to winter.”

Flynn noted winter tends to be a time of higher costs because of the competition for fuels and a lack of refining capacity. He noted all these things are going to keep the diesel market relatively tight into the new year.

“We’re an owner-operator fleet,” said Paul Jameson-Lee, principal at R&R Express Inc. “Our guys said we really don’t want to go to the West Coast anymore. And a lot of the way our business operates is coast-to-coast type over-the-road traffic in the power-only industry. So, when the drivers said, ‘we’re not going to go out west because of fuel prices,’ on January 24th of this year, we implemented a separate fuel surcharge for the West Coast.”

Jameson-Lee noted the approach seemed to alleviate a lot of the problems drivers had. R&R Express is paying its drivers in most of the country 92 cents a mile for fuel, the exception being the West Coast, which is about $1.09 a mile.

“We have successfully passed the fuel surcharge to our customer base because it’s in the national news almost every day and they understand this is the cost of doing business right now,” Jameson-Lee said. “We’re not being bashful about saying we have no control over fuel pricing. All we can do is react to it in the most logical manner that we possibly can.”

R&R Express updates its fuel surcharges for its customers and drivers on a weekly basis.

The EIA weekly diesel prices are used as a metric to determine what those fuel surcharges are going to be.

Leonard’s Express also utilizes a fuel surcharge that is updated on a weekly basis to offset costs. CEO Ken Johnson is more concerned about what impact rising gasoline and diesel prices overall will have on the economy and trucking industry.

“It’s certainly nice to see it come down,” Johnson told TT. “I hope it continues to come down and gasoline as well. Obviously, the inflation numbers were not good and fuel plays a big role in that. We see it as a headwind to the amount of freight we’re going to have to haul. People spending more on gas and groceries are going to have less to spend on other things.”

Inflation surged as the government’s consumer price index soared 9.1% over the past year, the biggest yearly increase since 1981, with nearly half of the increase due to higher energy costs.

EIA’s diesel price decline began a bit under the radar because of a reporting delay. A voltage irregularity caused hardware failures on two of its main processing servers.

“I’m glad that they’re back on track now,” Johnson said. “But the overall concern is just the economy in general and what these costs are doing to it.” 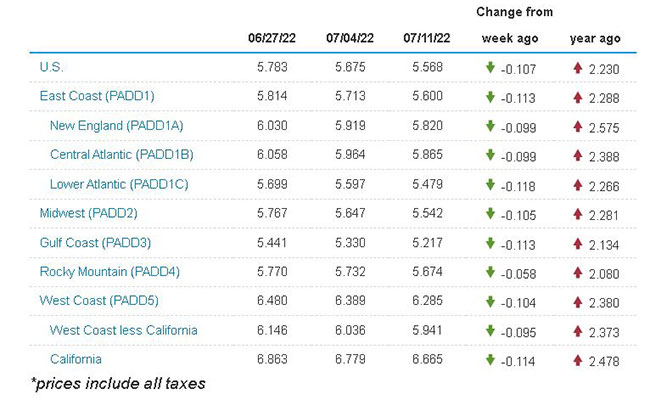