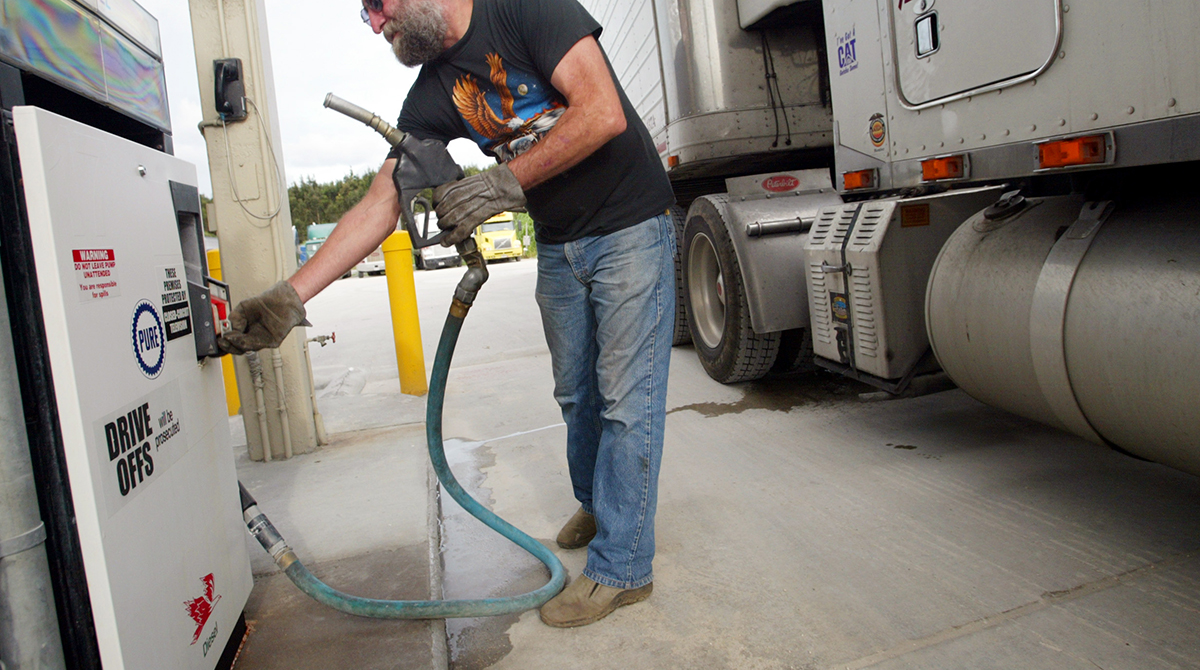 The cost of trucking’s main fuel has increased 2.6 cents over the past three weeks and now costs 8.9 cents more than it did a year ago, when the price was $2.402 a gallon, according to DOE.

Diesel ticked up in seven DOE regions. California and New England were exceptions, where the prices dropped 0.2 cent and 0.5 cent, respectively.

Meanwhile, the average price for regular gasoline dropped 1.9 cents to $2.278, or 4.8 cents higher than a year ago, according to DOE. West Texas Intermediate crude futures on the New York Mercantile Exchange closed at $47.12 per barrel on July 19, after a year-to-date low of 42.53 on June 21.

Around the industry, diesel’s incremental gains are drawing mixed reactions from trucking executives.

“To be honest, it came down pretty drastically last year, then started to go up and now it’s sort of leveled off,” Bill Bliem, senior vice president of fleet services for NFI Industries, said in an interview with Transport Topics. “It would have to go up pretty significantly, 20 or 30 cents” for NFI to be concerned. NFI, which is based in Cherry Hill, N.J., has a company fleet of 2,400 trucks and ranks No. 27 on the Transport Topics Top 100 list of the largest North American for-hire carriers.

However, Kyle Kottke, general manager of Kottke Trucking, said his fleet still keeps a close eye on prices. “Of course, it impacts us,” he said. “We’re currently deadheading about 11% of the time, and we have to use different strategies to manage that 11%,” he said. The fleet does “simple fuel hedging strategies,” he added, and covers a percentage of the deadhead figure “that are exposed to the market with forward fuel contracts. We’re buying fuel in the future at a price today.”

He noted that Kottke Trucking, headquartered in Buffalo Lake, Minn., also invests in fuel-saving strategies. “We have the [auxiliary power units] on our tractors to eliminate idling while not moving. We have fuel-efficient technology on tractors and trailers to maximize fuel economy, including the skirts on the side of the trailer and on tails on the back of the trailer,” he said.

Kottke also adds a shipper fuel surcharge to keep fuel costs in check. In his case, the surcharge is “a contractual item that states your base rate is based on fuel on x, and anything over x, there’s an agreed-to amount that the customer will pay in addition to the base rate,” he said.

Tim Flanigan, vice president of Bay & Bay Transportation, in Eagan, Minn., said diesel prices seem “very stable, which is good, but we do watch them very closely. Pennies matter in this business. So a 1-cent rise isn’t as alarming as something 20 or 25 cents, or a big change in the oil market, which can create quite a shock to the industry.”

“It seems like we’ve kind of found a new value range around $45, and the market is hunting for its next real driver,” Gene McGillian, market research manager at Tradition Energy in Stamford, Conn., told Bloomberg News.

The weekly U.S. rig count has remained unchanged, as reported July 17, but is up 505 from the past year, according to Houston-based Baker Hughes Inc., an oil field services company that ranks No. 14 on the Transport Topics Top 100 list of the largest North American private carriers.