The U.S. average retail price of diesel rose 4.4 cents to $2.802 a gallon on the heels of Hurricane Irma slamming into Florida, causing power outages for millions of people and disrupting fuel supplies.

Irma’s strength, a Category 4 that made landfall in Florida on Sept. 10, steadily degraded to a Category 1 storm as it moved north, and two key Florida ports handling petroleum tankers and barges each reported they were quickly returning to normal. 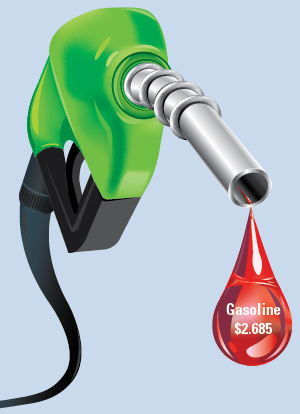 “Now that the storm has passed and the [Florida] ports have reopened, the fuel logistics network is starting to return to operations. But even the bulk transport carriers are challenged to put their tractors back on the road as many of their drivers were forced to evacuate the region,” Scott Perry, chief technology and procurement officer for Ryder System Inc., said Sept. 13.

Miami-based Ryder is coordinating with all fuel suppliers and carriers to try to ensure “we have fuel inventory available across the region to support our customers as they restart their operations,” Perry said.

Prices for trucking’s main fuel climbed in all regions.

The U.S. average price for regular gasoline rose 0.6 cent to $2.685 a gallon. It costs 48.3 cents more than it did a year ago, DOE’s Energy Information Administration said.

Weekly gasoline prices rose in all regions, except in the Gulf Coast area, where it dipped 0.5 cent.

“Ten of the 12 petroleum companies that operate at the port have reopened. The two that are still working to reopen have water intrusion and related issues,” Assistant Director of Communications Ellen Kennedy said Sept. 13. “They are working around the clock to meet unusually high consumer demands resulting from Hurricane Irma.”

Fuel tankers have been given top priority by state officials for docking at the port, and 10 were scheduled to arrive by Sept. 14, she said.

“There are all kinds of petroleum products on these vessels; diesel, regular, premium and jet fuel,” she told TT.

Port Tampa Bay supplies about 45% of the fuel arriving by ship transport to the state of Florida, Sodos said.

One transportation and logistics provider in Jacksonville, Fla., was back in business Sept. 12.

“We have a local fleet of 20 day cabs, and we haven’t had any interruptions as far as fueling,” Grimes Cos. Executive Vice President Ike Sherlock told Transport Topics. We were able to fuel [Sept. 8], fuel everything. And we have just started back to work this morning. We don’t see any issues with fueling or with any price changes.”

He said the trucks purchase fuel in Jacksonville.

“The flooding is receding, but was a big issue,” Sherlock said.

“We run a million square feet of [logistics] facilities, six facilities, and they are all open today. We were very fortunate, very blessed — no damage to our facilities or equipment,” he said. “The City of Jacksonville has responded very well to this disaster.”

At the same time, crude refineries in Texas were moving closer to normal production after Category 4 Hurricane Harvey struck Texas on Aug. 25, according to reports, as all U.S. refineries operated at 77.7% of their operable capacity the week of Sept. 8.

West Texas Intermediate crude futures on the New York Mercantile Exchange closed at $48.07 on Sept. 11 compared with $48.66 per barrel Sept. 5.