A 2.4-cent dip Oct. 31 marks the only decline in the national average price of diesel over the past five weeks. (Rogelio V. Solis/Associated Press)

The national average price of diesel nudged up 1.6 cents to $5.333 a gallon, according to Energy Information Administration data released Nov. 7.

Diesel’s average price has increased in four of the past five weeks. The cost of a gallon had risen 50.5 cents over three consecutive weeks before a 2.4-cent drop Oct. 31.

The average price of diesel rose in six of the 10 regions in EIA’s survey and dropped in four. The largest increase was 11.3 cents in New England; the biggest decline was 6.3 cents in California.

California still has the costliest diesel in the nation with an average price of $6.191 a gallon — 42.7 cents more than the second-most-expensive region, the West Coast.

The price of gasoline also notched up 5.4 cents week-over-week from $3.742 to $3.796 a gallon. Even with the declines through much of the summer and fall, gas costs 38.6 cents more than at this time a year ago. 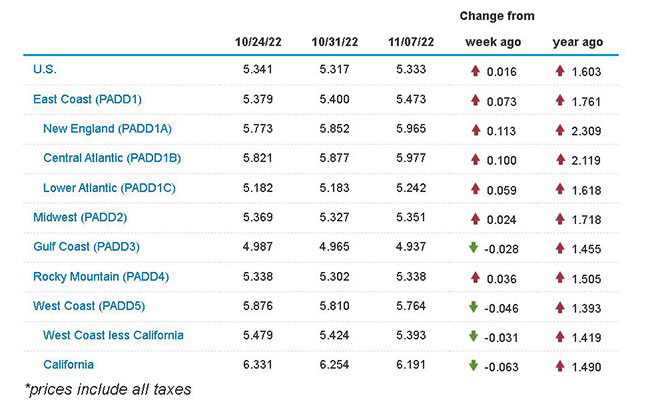 Meanwhile, concerns are growing in the Northeast over the availability and price of diesel fuel and home heating oil. Both products are midweight distillations of petroleum that produce the same amount of energy, with the difference being home heating oil is dyed to distinguish it from lower-taxed versions of diesel fuel.

Northeast consumers will shoulder the highest energy bills in decades this winter. The Energy Information Administration reports the average family in the Northeast and Mid-Atlantic that uses home heating oil will pay an estimated $2,354 this season compared with $1,307 last winter. The price surged to $5.86 a gallon Nov. 2, up from $3.36 last November.

As supplies have tightened in the Northeast, the price is up 13.3 cents in just a week.

The least expensive home heating oil in the nation is in the Midwest, where it can be purchased for $5.20 a gallon. That’s up 4.1 cents week-over-week and $2.02 from this time last year.

Northeast households that use heating oil have dropped in recent years as more switch to gas, but that’s little comfort to the almost 20% of homes there that still rely on it.

Residential propane prices have been relatively stable most of the year, moving in a range between $2.60 and $3 a gallon. That fuel on Nov. 2 cost $2.66 a gallon, which is 5 cents cheaper from the same time in 2021. EIA says households using propane will pay an estimated $1,970 during the heating season from October through March. The agency says the price difference between home heating oil and propane is a savings of $384 during the winter, if the household is heating with propane, compared with diesel.

In the Northeast, a typical family is expected to pay $1,094 for natural gas this winter, an increase of 23% year-over-year.

The Biden administration is facing pressure to increase the supply of energy across the country, especially as a global supply chain crunch is playing out, brought on in part by Russia’s invasion of Ukraine.

In its latest report, EIA said U.S. petroleum product exports increased 11% in the first half of the year to nearly 600,000 barrels per day compared with the first six months of 2021. It’s the fastest growth rate for exports since the same period in 2017.

The report said nearly all petroleum products contributed to increased exports, and the largest volumes came from distillate fuel oil and hydrocarbon gas liquids, which include propane.

The White House continues to release unprecedented amounts of oil from the nation’s Strategic Petroleum Reserve, however oil refineries are running at nearly 91% capacity compared with 85.1% last year.

Oil industry advocacy group American Petroleum Institute and others have called for more domestic oil production as a way to lower prices.

EIA said U.S. crude oil production averages 11.7 million barrels per day and is expected to jump to 12.4 million barrels in 2023, which would surpass the record high set in 2019.