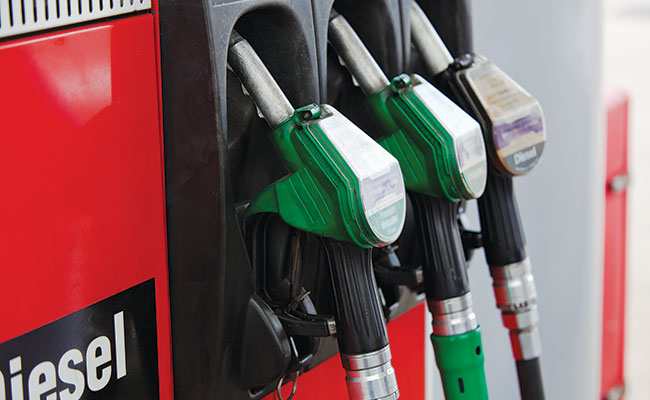 The average price of diesel went up in five of the 10 regions in the Energy Information Administration's weekly survey and down in the other five. (Thinkstock)

The national average price of diesel remained essentially flat, nudging up two-tenths of a cent to reach $5.341 a gallon, according to Energy Information Administration data released Oct. 24.

Diesel’s average price has risen 50.5 cents a gallon over the past three weeks after five consecutive weeks of declines.

Diesel’s price went up in five of the 10 regions in EIA’s survey and down in five. The biggest gain was 17.8 cents in New England; the largest drop was 16.8 cents in California. 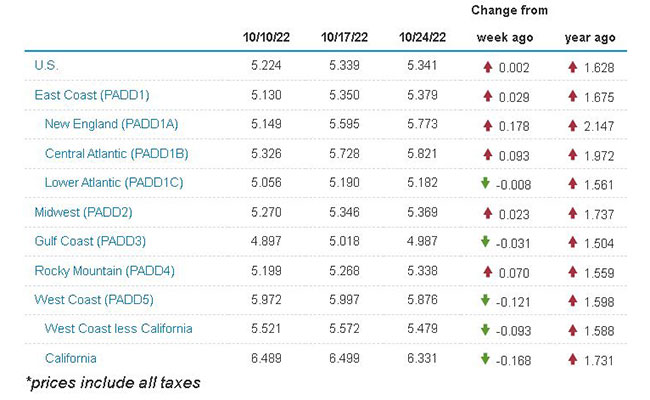 Gasoline prices are falling ahead of the midterm U.S. elections, easing the pressure on Democrats grappling with high fuel prices in key swing states and elsewhere across the country, Bloomberg News reported. The national average price for a gallon of gasoline is now in its third week of declines and has fallen by $1.25 since the June peak of more than $5.

At the same time, the federal government put more oil into the market from the Strategic Petroleum Reserve in an attempt to bring down fuel prices further and continue to address the ongoing market disruption caused when Russia invaded the Ukraine Feb. 24.

“This year’s survey had the highest number of responses to date, showing how committed our industry is to identifying the most critical concerns, and more importantly, figuring out how we collectively deal with each issue,” said ATRI President Rebecca Brewster.

It was the second year in a row owner-operators ranked fuel prices as their No. 1 issue, according to ATRI.

Also, 54.7% of respondents believed federal action was the best way to stabilize the fuel supply — including by expanding refining capacity, increased domestic drilling or continuing to tap the SPR.

Measures such as state fuel tax holidays were seen as more problematic because of lost funds for bridge and road construction.

Also, only 6.8% of respondents believe the best approach for addressing high fuel costs is by increasing alternative and renewable fuels. Only 7% of respondents in ATRI’s 2022 Operational Costs of Trucking analysis used some form of alternative fuel, primarily in local and regional delivery operations.

But U.S. truck makers are moving ahead steadily in pursuit of zero emissions.

Recently, at the Green Transportation Summit and Expo in Tacoma, Wash., executives from Daimler Truck, Navistar, Paccar Inc. and Volvo Group outlined a shared vision for an industrywide transition to medium- and heavy-duty zero-emission vehicles.

The four truck makers are founding members of the coalition Partners for a Zero Emission Vehicle Future that considers ZEVs to be the future of commercial transportation.

“In the early stages of the industry’s transition to zero emissions, grants and incentives are essential to help operators and owners offset initial higher purchase costs and encourage deployment of these vehicles on our nation’s roads,” Alec Cervenka, zero emissions sales manager at Paccar’s Kenworth Truck Co. brand, said at the event.

As volumes increase and the industry brings to bear economies of scale, Cervenka said, “we eventually expect ZEV technology to provide a total cost of ownership on par or better than the current diesel truck.”