The Dawn of Electric Trucks 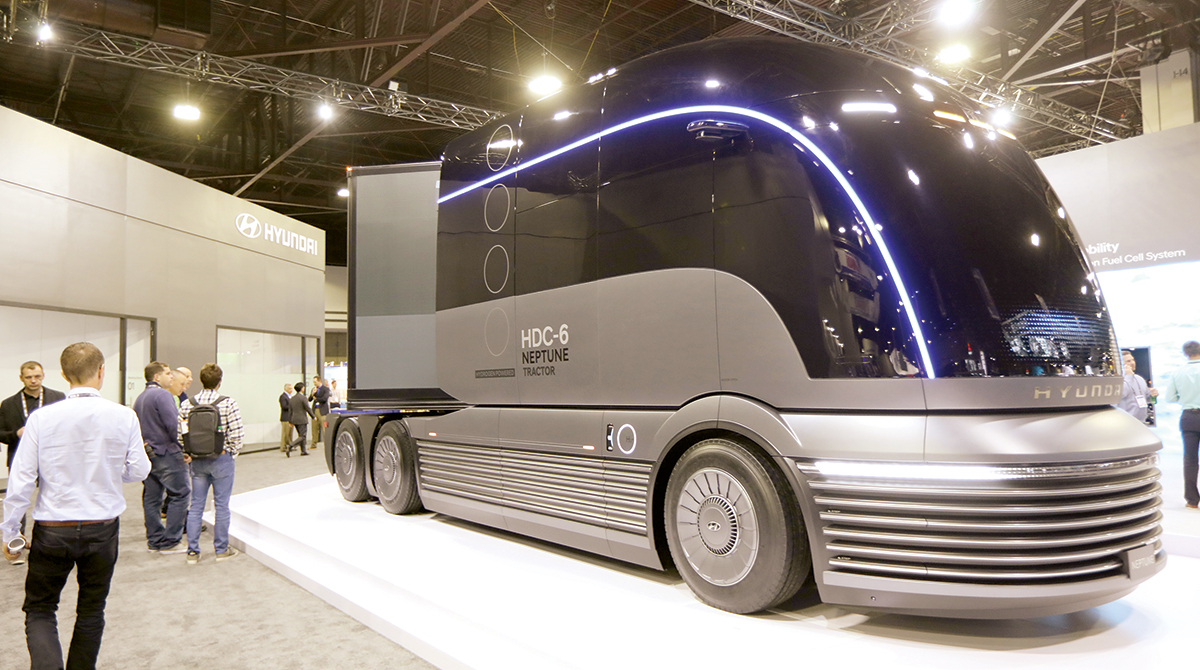 This emerging segment of the commercial vehicle market is still in its infancy, but the world’s largest truck makers and their suppliers have made it clear that they see electrification as a pillar of the industry’s future.

What’s less clear, however, is how quickly that future will arrive.

Diesel undoubtedly will remain trucking’s primary fuel for years to come, and the internal combustion engine still has a long road ahead of it, but manufacturers believe that electric trucks are poised to become an increasingly important piece of the freight transportation industry.

“I’m convinced in the next 10-15 years, one-third of our trucks and buses will have an alternative drivetrain, and most of those will be fully electric. And by the way, this is a very conservative ballpark figure,” Traton Group CEO Andreas Renschler said at an Oct. 28 press event at the 2019 North American Commercial Vehicle Show in Atlanta.

Traton Group, a Volkswagen subsidiary, sells commercial vehicles worldwide under the MAN, Scania and Volkswagen brands and has a strategic alliance with U.S.-based truck maker Navistar. 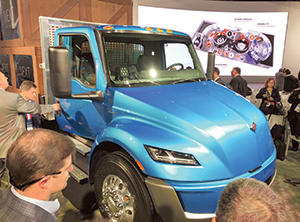 At this stage, however, these trucks come with higher costs than diesel models, along with vehicle range limitations and added weight that can cut into payload capacity.

“In certain regions and countries, I think we will see a ramp-up,” ­Lundstedt said at the Heavy Duty Manufacturers Association’s luncheon and briefing Oct. 29 at NACV.

But the shift toward electric trucks will require more than the vehicles themselves. It also will require charging infrastructure, adequate power grid capacity and upstream electricity generation that is sustainable, he said, adding that it wouldn’t make sense from an environmental standpoint to replace diesel with electricity from coal-fired power plants.

“That’s the reason why it’s so important to take it from a system perspective,” Lundstedt said.

Volvo Group is the parent of Volvo Trucks and Mack Trucks.

Although electric trucks are not yet widely available in North America, truck manufacturers and a select number of their fleet customers have begun putting prototype vehicles to work moving freight.

The majority of these electric trucks have been deployed in port drayage operations in Southern California with the aid of grant money available in the state.

Meanwhile, industry suppliers such as Dana and Meritor have been investing in electrification to support original equipment manufacturers.

Battery-electric vehicles remain the most prevalent development pathway toward zero-emission trucking, but a growing number of developers also are espousing hydrogen fuel cells as a complementary technology.

That was particularly evident at NACV, where several exhibitors showcased hydrogen-­electric trucks. 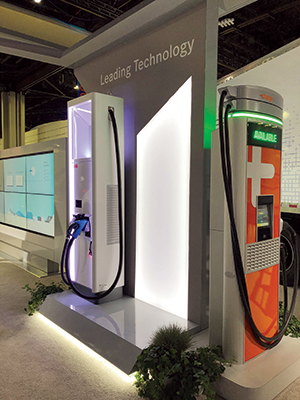 Bosch exhibited a hydrogen-electric truck from Nikola Motor Co. to illustrate its collaboration with the startup truck manufacturer. Nikola helped spark the trucking industry’s conversation about electric trucks — and the use of hydrogen fuel cells to extend their range — when it revealed its first hydrogen-­electric Class 8 model in late 2016.

All of the established truck manufacturers in North America have since introduced their first electric truck ­models, and have outlined plans to begin series production within the next couple of years.

The nascent electric truck segment also has attracted several newcomers to the industry.

As truck makers prepare for the commercial launch of electric-powered models over the next couple of years, they are focused on easing the learning curve associated with implementing these vehicles.

Navistar, for one, has established an electric-vehicle business that will not only build electric vehicles, but also provide consulting and support to fleet customers as they look to deploy them in their operations.

The mission of this business unit, named NEXT eMobility Solutions, is “to make the move to electric as easy as possible,” Persio Lisboa, Navistar’s chief operating officer, said at NACV.

Fleets need more than a truck — they need clarity on issues such as vehicle charging infrastructure, training for drivers and technicians, and the availability of grant money, he said. “Over and over, we hear it is not just about the hardware. Their concern is about everything else required to move to electric.”

NEXT will develop customized implementation plans for each fleet customer’s unique operations, along with charging strategies and performance monitoring, the company said.

“There is a large potential market for electric trucks. The economics of these vehicles is getting better every day. But the market is still finding its footing,” Lisboa said. “Early adopters are finding there is no one-size-fits-all option.”
Navistar also unveiled a battery-­electric model based on its medium-duty International MV Series truck at NACV. The company said it plans to begin production of medium-duty electric trucks under the International brand in early 2021.

Early Use Cases for Electric Trucks

In the near term, electric trucks will be best suited to shorthaul and regional operations in which the vehicle returns to a terminal for recharging.

“We have designed our electric vehicles to perform as well as a diesel powertrain truck,” said Scott Newhouse, Peterbilt’s chief engineer. “We believe these three applications — refuse, regional haul and city delivery — will provide the most immediate and near-term return on investment for our customers.” 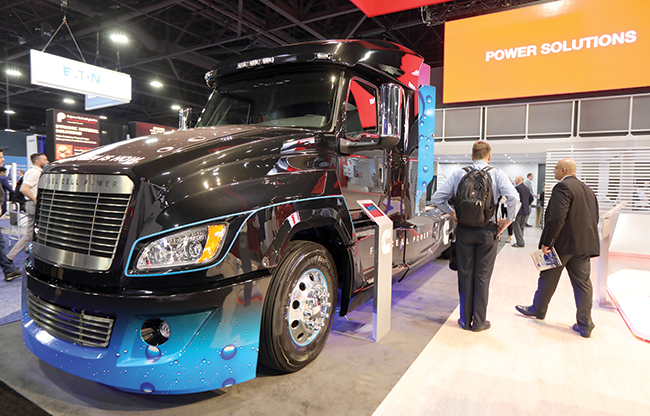 Today, the company is focused on gaining test miles in real-world applications. Peterbilt announced at the show that it has 16 electric trucks in operation, with 21 more going into service in the first half of 2020.

The truck maker said it will begin taking orders for its three electric truck models in the second quarter of 2020, with low volume production scheduled to start by the end of 2020.

“Frito-Lay is continuously exploring current and emerging technologies for our freight equipment as we work toward reducing PepsiCo’s absolute greenhouse gas emissions by 20% by 2030,” said Michael O’Connell, the company’s vice president of supply chain.

“Biagi Bros. has a history of green fleet operations, and we’re extremely proud to have partnered with Peterbilt to add the 579EV to our diverse fleet of special trucks, tractors and trailers we use to serve our customers,” said Gregg Stumbaugh, director of equipment at Biagi Bros.

Electric trucks are not just appearing at trade shows, but increasingly are moving freight in real-world trucking operations.

Manufacturers have begun handing over electric prototypes to fleet customers to help prove the viability of the technology and pave the way for a broader rollout.

These early deployments have been concentrated primarily in Southern California, which has become an early incubation zone for this technology in North America. 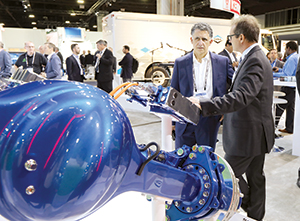 Suppliers such as Dana have developed e-axles and other systems for electric trucks. (John Sommers II for Transport Topics)

Through this initiative, the truck ­maker plans to introduce 23 of its VNR Electric regional haul models to haul freight from the ports of Long Beach and Los Angeles to four nearby logistics ­facilities.

Volvo is partnering with two trucking fleets — NFI and Dependable Highway Express — to put the demonstration trucks to work.

The project addresses not only the trucks themselves, but also charging infrastructure and other factors necessary to support electrification.

Volvo LIGHTS is supported by a $45 million investment by Volvo and a $45 million grant funded by the California Air ­Re­sources Board.

The truck maker has been handing over its initial Class 8 Freightliner ­eCascadia and medium-duty eM2 models to NFI and Penske Truck Leasing for testing in their freight operations.

This first wave of test trucks, dubbed the Freightliner Electric Innovation Fleet, is intended to help DTNA and the fleets expand their knowledge on how to implement the technology more broadly.

DTNA said it plans to expand the Innovation Fleet to 20 eCascadias and 10 eM2s to help prepare for series production of those models in 2021.

Mack Trucks is preparing to deploy a battery-electric refuse truck with the City of New York Department of Sanitation.

The Road Ahead For Alternative Fuels

While electric-powered trucks are just beginning to enter the market, compressed natural gas remains the most widely available alternative to diesel today.

“We continue to believe that CNG is a viable alternative for many customers here in North America,” he said in an interview with Transport Topics at NACV.

At the same time, manufacturers will continue to further refine diesel engines ahead of the federal Phase 2 greenhouse gas regulations, which will introduce increasingly stringent emissions and fuel-economy standards through 2027. 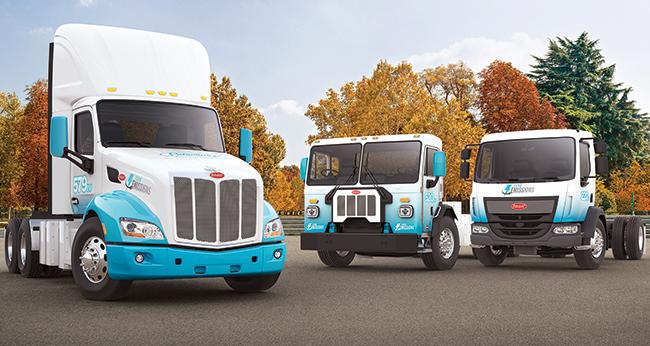 But looking further ahead, manufacturers are positioning electric trucks as the industry’s future, or at least an important part of it.

Andreas Juretzka, director for product development at DTNA’s e-mobility group, said the electric truck market may ramp up slowly when the vehicles first become available, but he predicted that this new truck category eventually will take off.

He acknowledged that electric trucks currently rely heavily on government grants and incentives to offset higher vehicle costs, caused primarily by the high cost of batteries. Battery prices are coming down, but must continue to drop to reduce the price disparity with diesel.

However, in the decades to come, ­Juretzka said it’s not difficult to envision a day when renewable energy has become widely available. He predicted that future generations will marvel that people once extracted fossil fuels from the ground just to be mobile.

“I took this assignment because I ­really believe in it,” he said. “I believe that electric is for the future.”

The current push toward electric vehicles is also in some ways a return to the distant past.

In the early 1900s, electric cars held a sizable portion of the still young automobile market, but were leapfrogged by mass-produced cars powered by gasoline engines.

Now, more than a century later, electric vehicles are again becoming competitive with combustion engines and have a chance to overtake them, due in large part to the advance of battery technology, Juretzka said.

“There was always this rivalry,” he said. “It seems that there’s a real chance for electric now where it never had a chance before, because of energy storage.”