Daimler’s Legal Risks Around Emissions Linger Ahead of Revamp

Daimler AG shares have soared since the pandemic forced the Mercedes-Benz maker to postpone its annual shareholders’ meeting around this time a year ago. Its chairman’s swan song still will hit some low notes.

Investigations into diesel emissions have been on the agenda of almost every supervisory board meeting of late, Chairman Manfred Bischoff wrote in a letter to shareholders ahead of Daimler’s annual meeting March 31. A separate European Commission probe into whether the company colluded with German peers Volkswagen AG and BMW AG on emissions technology also remains an important issue, he added.

The remarks are a fresh reminder of the persistent regulatory issues looming over CEO Ola Kallenius, whose overhaul of Daimler has gained traction, as well as Bernd Pischetsrieder, who will succeed Bischoff as chairman after the meeting. He’ll inherit a supervisory board still examining how the company ran afoul of emissions rules with its diesel engines and whether management failed to take appropriate measures. It also is looking into potential compensation claims against current or former executives on the antitrust matter. 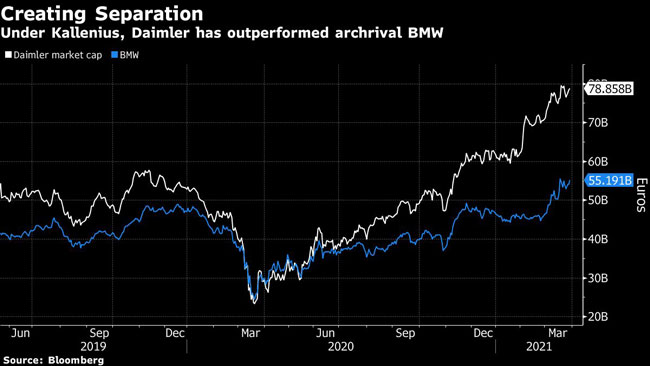 The legal issues still left to be resolved have been overlooked by investors lately as the world’s largest luxury-vehicle maker revamps itself for the electric-car era. Daimler shares have surged more than 170% over the past year as Kallenius has made plans to spin off the company’s sprawling trucks division. Mercedes also is launching key models including the battery-powered EQS sedan that will be critical to challenging Tesla Inc. and keeping archrival BMW AG at bay.

Daimler agreed last year to pay out about $2.2 billion in penalties and settlements to resolve diesel issues in the U.S., but it remains subject to investigations in Germany and elsewhere. The antitrust matter relates to accusations the company conspired with VW and BMW to delay the introduction of emissions-control technology for cars sold in Europe from 2009 to 2014.

Deka Investment GmbH fund manager Ingo Speich acknowledged Daimler’s progress under Kallenius in a statement but criticized the appointment of Pischetsrieder — a former CEO of BMW and VW — on grounds that the company needs to pivot to a new generation dominated by EVs and software. Speich urged sustained cost discipline and more efforts to clarify legal risks to avoid “a fire that can turn into conflagration.”

Bischoff wrote in his letter that Daimler’s products are in great demand across all major markets and are generating the funds to finance the company’s transformation.