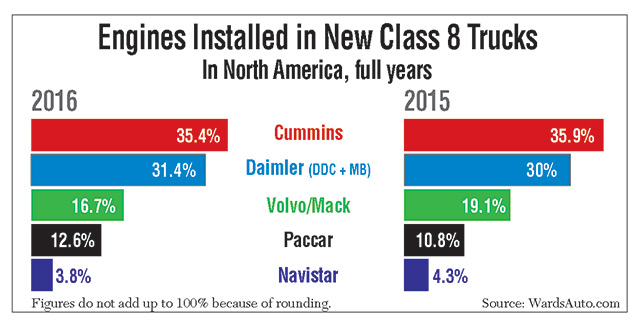 This story appears in the March 20 print edition of Transport Topics.

A second-half slowdown in truck sales for Daimler Trucks’ two North American brands carried Cummins Inc. to its leadership in North American Class 8 truck engines for all of 2016, according to figures from WardsAuto.com.

Daimler’s Detroit brand engines eclipsed those from Cummins during the first half, but as sales of Freightliner and Western Star trucks flagged in the second half, Cummins’ sales remained steady, giving the Columbus, Indiana-based manufacturer a heavy-duty engine market share of 35.4% compared with 31.4% for the combination of Daimler’s Detroit and Mercedes-Benz engines.

Among the other three participants in the engine business, all of them truck makers as well, Volvo Group lost 2.4 percentage points from 2015 to finish with 16.7% of the 2016 engine market, Paccar Inc. gained 1.8 points to 12.6%, and Navistar Inc. lost a half-point to 3.8% last year.

“We are pleased to remain as the first choice for customers seeking productivity, fuel efficiency or balanced performance with the industry’s broadest range of diesel and natural gas heavy-duty engines and SmartAdvantage powertrains,” said Amy Boerger, Cummins vice president for North America sales.

Cummins, the last independent engine maker, has held the top spot since 2007, Ward’s said. Its lead was solidified and even topped 40% after competitor Caterpillar Inc. left the on-highway engine market at the end of 2009, but since then, Cummins has acknowledged its share has been eroding as truck makers have actively manufactured and marketed in-house engines as “integrated powertrains” of engines and transmissions, and even drive axles.

Among the smaller heavy-duty engines, often referred to as “Baby 8” trucks and engines, Cummins claimed a majority market share and also in the Class 7 medium- duty group.

The Cummins Baby 8 entry, also used in Class 7, is the L9 engine, an updated version of the longtime ISL engine.

The role of the independent engine manufacturer has been debated for more than 20 years, said ACT Research Co. Vice President Steve Tam, a former Cummins employee who still lives in Columbus.

“If there is one component on a truck that is spec’ed by name, it’s the engine,” Tam said.

“All of the truck OEMs have gone on record supporting dual brands. They want their proprietary brands to dominate, but ultimately they will do what the customer wants,” he said.

Paccar’s growth in 2016 market share corresponds with the rollout of its MX-11 to complement its older, larger MX-13 model.

Navistar is trying to regain a piece of the engine market after problems in 2012 with the introduction of the 12.4-liter A26 engine last month.

Neither Navistar nor Paccar makes an engine larger than 13 liters, although DTNA makes 15- and 16-liter models. While some big bore buyers have changed to 13-liter engines, there still is a strong North American demand for 15-liter models, Tam said.

“There are some 15-liter customers still out there who don’t need them, but won’t give them up. But the overwhelming number who have them, have a definite, work-based need for that kind of power plant,” Tam said.

The Ward’s data show that all seven truck brands used some Cummins power in 2016 for their large-engine vehicles. Mack used the fewest, just 53, and Kenworth the most, with 25,330.

On a proportional basis, Navistar was the heaviest Cummins customer, as 76.2% of Navistar’s large- engine trucks featured a red engine. For Kenworth, the rate was 61.5%, Ward’s said.