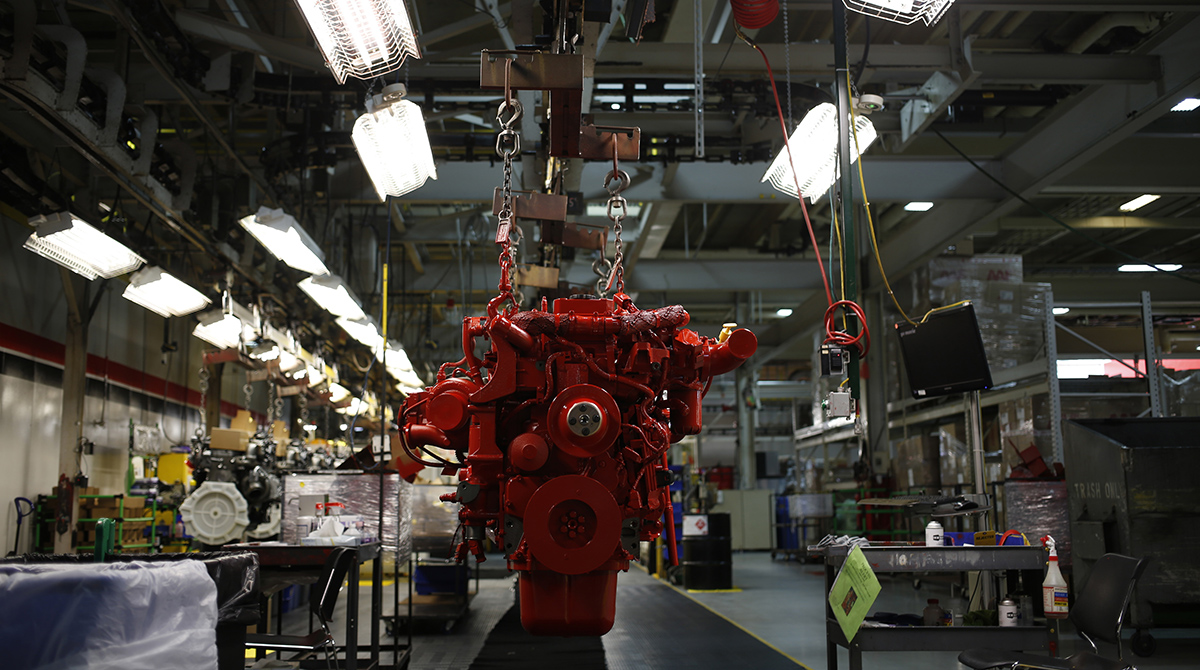 Cummins Inc., the last independent engine maker, clawed back some market share from truck makers’ integrated powertrains to reclaim first place in North American engine sales during the first half of 2017.

Cummins was the only manufacturer to install more engines in North American Class 8 trucks during the first six months of this year, with an increase of 2.6% to 42,062 for the period, compared with 40,999 engines from January through June 2016.

“Cummins is pleased with our gains in North American market share and with our overall second-quarter sales increases in all four business segments,” company Vice President of Sales Amy Boerger said.

Overall, the North American engine market contracted 10.5% to 112,511 heavy trucks from 125,715 year-over-year. The figures come from a WardsAuto.com report on North American factory sales of heavy-duty trucks, including their engines, released July 31.

Daimler Trucks North America dropped to second place this year with 36,566 engines, down 12.9% from last year’s first-half level of 41,966. In the first half of 2016, DTNA owned first place as Freightliner and Western Star customers specified in-house Detroit brand and Mercedes-Benz engines.

Despite the decline, DTNA is pleased with the progress of its integrated equipment lineup, said Kary Schaefer, DTNA general manager for marketing and strategy.

“Penetration of Detroit engines and Detroit integrated powertrain components has never reached higher penetration levels in DTNA products,” Schaefer said. “Our Detroit components are viewed by our customers as critical in achieving incredible reliability, fuel efficiency, and an integral component of the new Cascadia and our complete Freightliner product line.”

However, Cummins’ lead among the smaller heavy-duty engines, typically installed in trucks often called “Baby Eights,” allowed the Columbus, Ind.-based manufacturer to take the lead among all Class 8 engines.

North American truck makers sold 98,702 of the larger Class 8s during the first six months and 13,809 Baby Eights. Of the smaller heavy-duty models sold, 73.5% had a Cummins engine. The 9-liter ISL is Cummins’ main product in this market.

Cummins also dominated the Class 7 market, placing its engines in 54.6% of those trucks during the first half of the year. 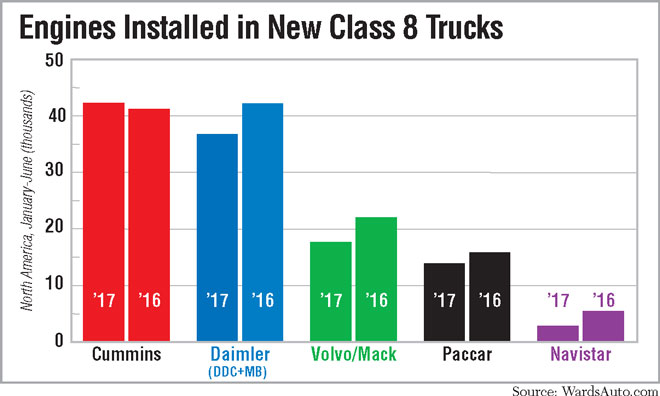 All heavy-duty truck makers have been trying to get their customers to select engines made in-house rather than by an independent supplier. The truck OEMs argue that when a truck, its engine and transmission are designed by a single engineering team, it maximizes the opportunity for improving fuel economy.

Sometimes the truck makers even add tractor drive axles as part of the design process, which is known broadly as vertical integration.

Volvo Group’s two North American companies, Mack and Volvo Trucks, combined for third place with 15.6% of engines, down from 17.3%.

Paccar Inc., the parent of Kenworth Trucks and Peterbilt Motors, placed 12.1% of engines, a dip from 12.4% a year ago.

Navistar International Corp. declined to 2.4% of North American engines from 4.2%.

“As pioneers of integration, Mack strongly believes in the benefits it enables, and we continue to refine and optimize our integrated powertrain,” including Mack brand engines, automated manual transmissions and drive axles, he said.

While Kenworth and Peterbilt buy a lot of Cummins X15 engines, especially for customers that do oil field work, the two OEMs also use many 11- and 13-liter engines made by Paccar, said Landon Sproull, Paccar powertrain vice president.

“For on-highway customers, they look at fuel economy and weight, so the MX-13 is attractive,” Sproull said. “Big liters [15 or 16] are not as important as they used to be. Look at Europe, it’s all 13 liters over there,” Sproull said.

The MX-11 has a maximum of 430 horsepower and the MX-13 goes to 510 hp, Sproull said, providing much more power in less space than 10 to 15 years ago. He said Kenworth and Peterbilt will continue to offer X15s to fleets and drivers that want them, but the 11- and 13-liter market probably will continue to grow and Paccar wants to dominate there.

The timing of the Ward’s report did not include Navistar’s latest effort, the 12.4-liter A26 engine. The Lisle, Ill., OEM announced its first shipments of A26s on June 30.

Navistar said Aug. 3 it is phasing out its 9- and 10-liter engines, currently made in Melrose Park, Ill. The N9 and N10 power plants often are used in Baby Eight and Class 7 International trucks, but lately customers have switched to Cummins engines.