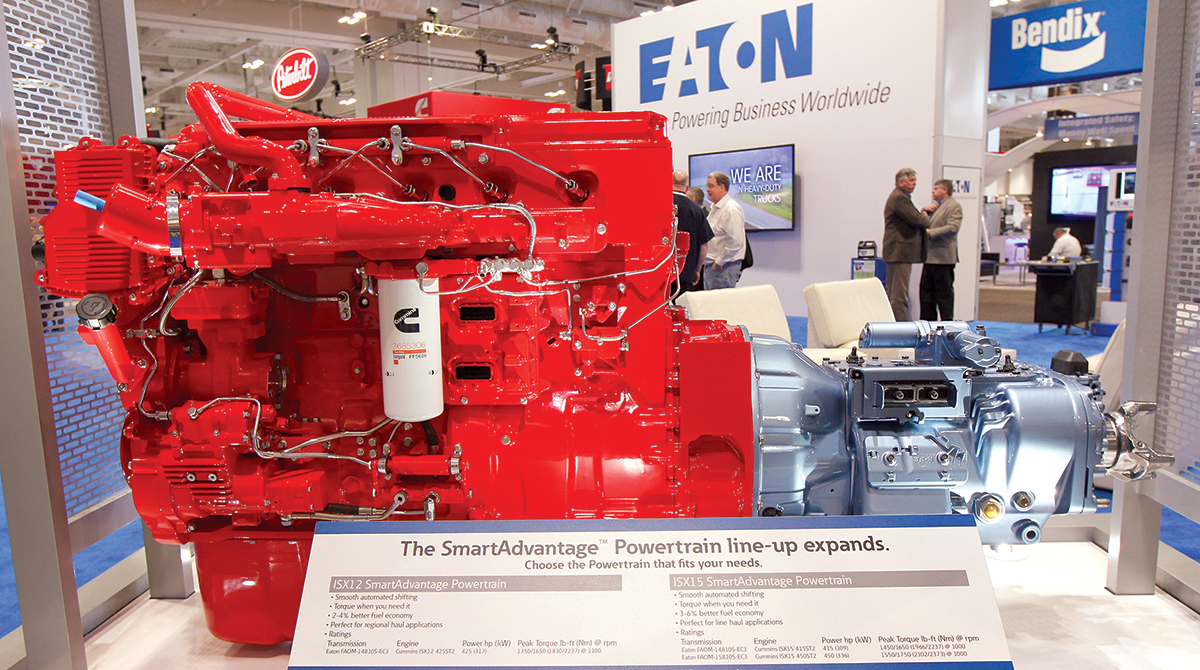 The current SmartAdvantage. A new version will debut in October. (John Sommers II for Transport Topics)

Cummins Inc. and Eaton Corp. announced their latest model SmartAdvantage Powertrain combination that will be available in October.

The two Tier 1 suppliers to trucking have been cooperating on the SmartAdvantage project since 2013, but now they have created a 50-50 joint venture, Eaton Cummins Automated Transmission Technologies, to do the work.

The latest version has an engine with 1,550 to 1,850 pound-feet of torque and is compatible with drive-axle ratings as fast as 2.47:1, the statement said.

Axle ratios quantify the number of drive shaft revolutions needed turn a wheel 360 degrees over the road. The lower the ratio, the faster the axle.

The joint venture said the new powertrain enables cruising speeds with engine revolutions per minute as low as 1,075.

“It’s our most downsped SmartAdvantage Powertrain, and it has been validated in field tests across a wide range of duty cycles. When paired with the 1,850 rating, fleets can maximize fuel economy without sacrificing performance,” said Alex Stucky, product strategy manager for heavy-duty linehaul transmissions for the joint venture.

Kenworth Trucks and Peterbilt Motors within Paccar Inc. and Navistar Inc. are the largest North American customers for Cummins engines, according to data from WardsAuto.com.

Eaton and Cummins began cooperating more closely on powertrains in response to vertical integration initiatives by truck-making corporations. North American heavy-duty truck makers have been encouraging their customers to specify engines and automated manual transmissions made in-house rather than by independent suppliers. Sometimes drive axles are included in the vertical integration powertrain packages.

The trucks makers say that when a single engineering team designs truck, engine and transmission, the opportunities are greatest for improving fuel economy for fleets.

Cummins and Eaton started SmartAdvantage as a harmonized response, touting their longtime experience with their respective components.