Convoy to Expand Services After $400 Million in New Funding 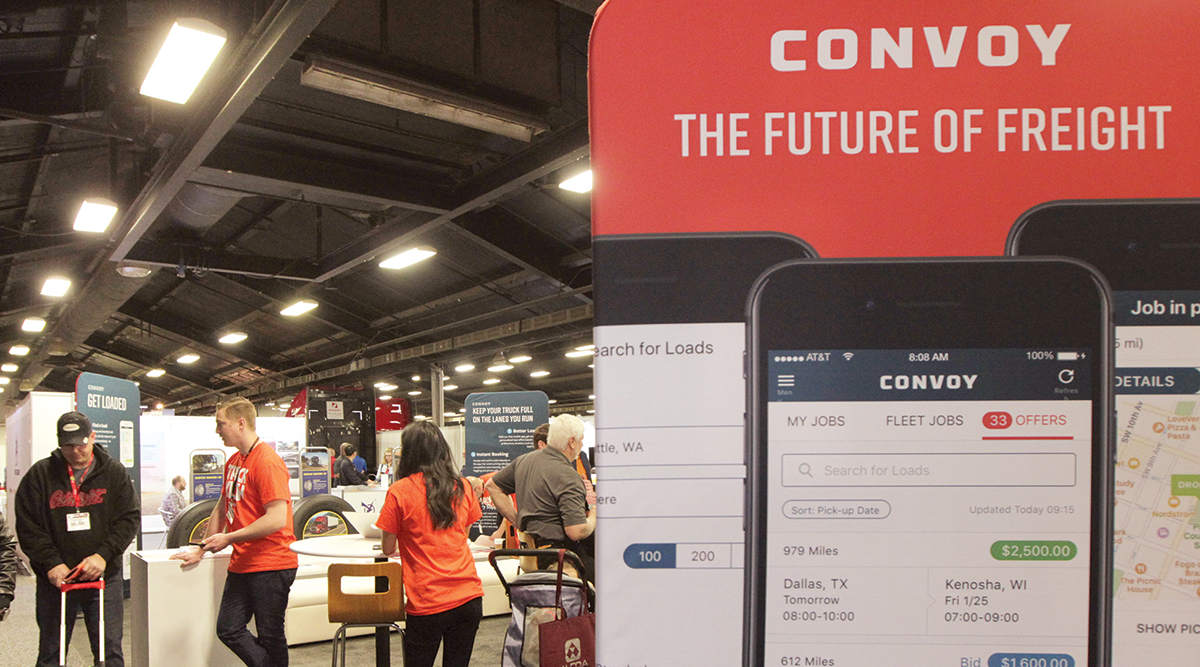 These efficiencies already are boosting profits for shippers and carriers, and slashing the amount of emissions coming from empty freight miles, a company executive said.

We are already profitable in many of our markets and are excited about the opportunity to accelerate our position.

“We are already profitable in many of our markets and are excited about the opportunity to accelerate our position,” Chief Product Officer Ziad Ismail told Transport Topics on Nov. 14, one day after the funding was announced.

Its latest round of investors included Generation Investment Management, whose co-founder and chairman is former Vice President Al Gore.

Joy Tuffield, a partner in Generation Investment Management, said in a release, “Through its use of data science, Convoy is driving the next evolution in efficiency across the industry. This is an exceptional opportunity to achieve a reduction in carbon emissions while simultaneously increasing earnings for truck drivers and increasing service quality for shippers.”

According to Seattle-based Convoy, its Automated Reload program reduces empty miles to 19% compared with the industry standard of 35% by bundling shipments. It will expand that program with the new funding, Ismail said.

“We see our costs come down [too]. But at the same time, drivers are actually earning more with us when they are doing these reloads,” he said. “Any truck driver will tell you if you can give them a loop that is highly efficient, they are going to be willing to do that at a lower price than if they, on their own, have to piece this together and find it, and it may not be as efficient.”

At the same time, Convoy is looking to expand its Convoy Go program, Ismail said. 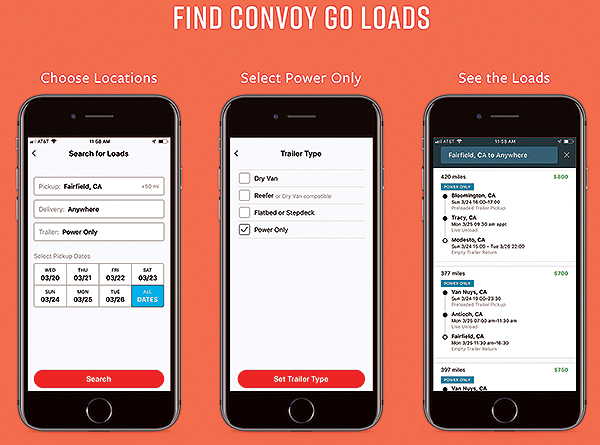 Convoy Go screens. Convoy Go allows carriers to complete twice as many jobs per week, according to the company. (Business Wire)

It offers drop trailer shipments to drivers across the nation supported by a large Convoy trailer pool that gives carriers access to billions of dollars in new shipments and allowing them to complete twice as many jobs per week, according to the company.

Digital brokers are gaining significant traction in the industry, some say, at the expense of traditional brokers who rely on phone conversations.

The most significant advantage of using a digital broker “is after hours when most brokers go home, you can still grab a load without ever talking to someone,” posted Chad Boblett, an owner-operator and creator of the Facebook group Rate Per Mile Masters, which had 28,310 members Nov. 16.

Searching an app then clicking to accept a load “will be the death of many traditional brokers. It’s not if it will happen; it’s now just a matter of time before it does happen,” Boblett wrote.

The timing of Convoy’s additional investment came eight days after an online posting by billionaire investor Ray Dalio, who wrote (but not specifically about Convoy), “There is now so much money wanting to buy these dreams [of revolutionary technology companies] that in some cases, venture capital investors are pushing money onto startups that don’t want more money because they already have more than enough.

“But the investors are threatening to harm these companies by providing enormous support to their startup competitors if they don’t take the money.”

Another investor said one part of Dalio’s opinion piece on venture capital doesn’t hang together.

“I have not heard of VCs forcing companies to take money even though they don’t need it just to keep the VC from funding competitors,” John Larkin, operating partner at Clarendon Capital, told TT. “That may happen once in a while, but that would seem like a recipe for disaster for experienced VCs, not to mention the companies that accept way too much capital.”

He added, “A little cushion makes sense, but the type of overfunding being alluded to simply dilutes all the shareholders and could be considered a breach of the fiduciary duties of a board [of governance]. Just my two cents for what it is worth.”