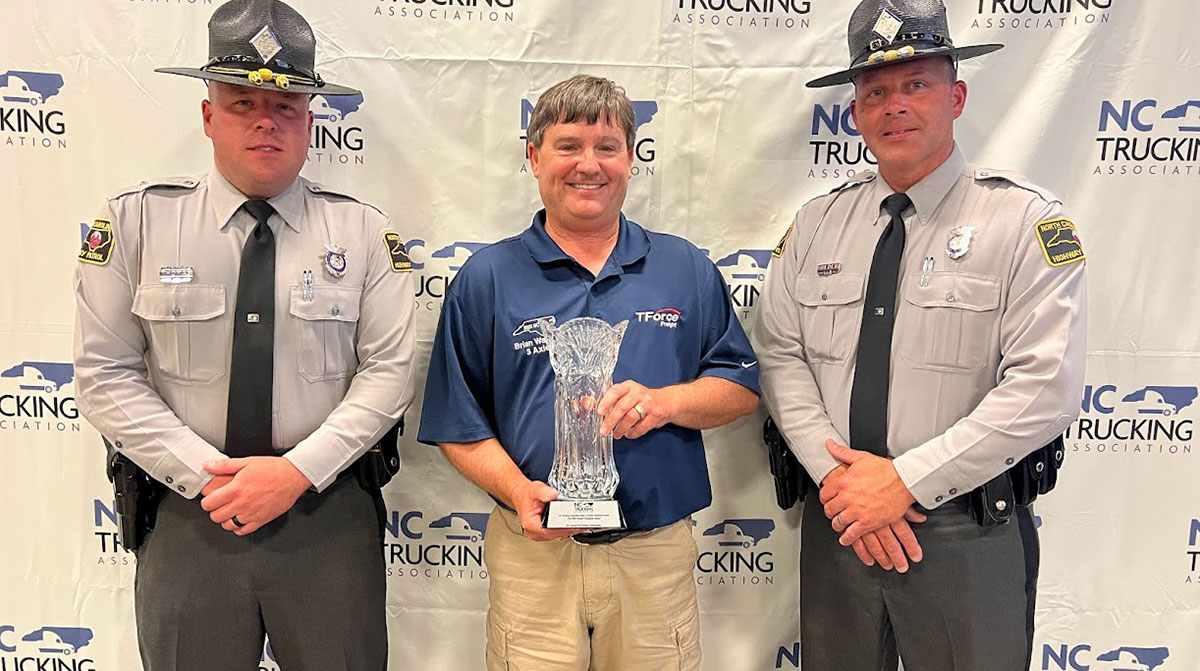 Grand champ and 3-axle winner Brian Walker, flanked by two state troopers, says “You don’t want to give any points up in any category, but as far as the written test, I really, really study that book." (North Carolina Trucking Association)

Brian Walker has spent more than a decade competing at the National Truck Driving Championships.

Over the years, he’s achieved success individually, winning the national 3-axle title in 2019, and as part of North Carolina’s delegation, which often is a contender in the team division.

This year, the Tar Heel State’s grand champion with TForce Freight competing in the 3-axle, is trying to prove he finally perfected a winning formula.

Walker’s cheat code, as the kids would say, is simple: Own the backroom.

Mastering the tournament’s written exam as well as the pre-trip inspection portions, two of the competition’s three disciplines, paves the way for collecting a lot of points.

The more points amassed prior to entering the tournament’s safety driving discipline, the better one’s chances are of winning a vehicle class. Or, as he put it, “It’s all about the points.”

“I usually do pretty good on the written test,” Walker told Transport Topics recently, referring to the tournament’s examination of rules and regulations outlined in the Facts for Drivers guidebook.

“There’s a lot of drivers that are so close in scoring, the difference is the written test and the pre-trip inspection. So, that’s the two things that you really got to hang your hat on and then just let the driving take care of itself.”

At nationals, Walker conceded he’s yet to record a perfect score on the written test. Perfection has eluded him by one response. (At the state level, he’s recorded perfect test scores.) “So I’m knocking on the door there a little bit,” he noted. “You don’t want to give any points up in any category, but as far as the written test, I really, really study that book.”

The overall strategy, especially for the driving course at nationals, is adhering to a modus operandi anchored on consistency. “I will work on a problem until I figure it out, pretty much,” he explained. “I want to be consistent. I want to consistently score on that problem, and I’ll continue to practice and practice until I feel comfortable, you know, on that particular problem.”

For many drivers, Walker said, competing at the big show is the thrill of a lifetime. The annual display of safety and skilled driving elevates the industry’s profile and connects trucking representatives from around the country.

“I’m going to prepare myself for all three stages of the competition and like I said, I’m going to hang my hat on the written test and the pre-trip and when I drive, I’m just going to take what I do every day in practice,” Walker continued. “I’m going to apply it out there in [Indianapolis] just like I would on my yard practicing in my own equipment.”

As North Carolina’s de facto captain, Walker anticipates his delegation this year to indubitably establish itself as a power-level program capable of best-in-show honors in the team category. He also expects enthusiasm from colleagues as well as guidance from mentors to help fuel his performance.

“We practice hard. We study hard and we inspect hard,” Walker said repeating his father’s coaching mantra. “And just, you know, do the best you can.”